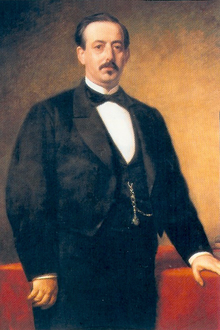 Born in Burgo de Osma, Zorrilla was educated at Valladolid and studied law at the Complutense University of Madrid, where he leaned towards radicalism in politics. In 1856 he was elected deputy, and soon attracted notice among the most advanced Progressists and Democrats.

He took part in the revolutionary propaganda that led to the military movement in Madrid on 22 June 1866. He had to take refuge in France for two years, like his fellow-conspirators, and only returned to Spain when the revolution of 1868 took place.

He was one of the members of the first cabinet after the revolution, and in 1869, under the regency of Marshal Serrano, he became Minister of Grace and Justice. In 1870 he was elected President of the House of Deputies, and seconded Juan Prim in offering the throne to Amadeus of Savoy. He went to Italy as President of the Commission, carrying to the Prince at Florence the official news of his election.

On the arrival of Amadeus in Spain, Ruiz Zorrilla became Minister of Public Works for a short time before resigning in protest against Serrano and Topete entering the councils of the new king. Six months later, in 1871, he was invited by Amadeus to form a cabinet, and he continued to be the principal councillor of the king until February 1873, when the monarch abdicated.

After the departure of Amadeus, Ruiz Zorrilla advocated the establishment of a republic. Notwithstanding this, he was not called upon either by the Federal Republicans to help them during the year 1873, or by Marshal Serrano during 1874 to join Martos and Sagasta in his cabinet. Immediately after the restoration of Alphonso XII, early in 1875, Ruiz Zorilla went to France.

He was for nearly eighteen years the soul of the republican conspiracies, the prompter of revolutionary propaganda, the chief inspirer of intrigues concerted by discontented military men of all ranks. He gave so much trouble to the Madrid governments that they organized a watch over him with the assistance of the French government and police, especially when it was discovered that the two military movements of August 1883 and September 1886 had been prepared and assisted by him.

During the last two years of his life Ruiz Zorrilla became less active; failing health and the loss of his wife had decreased his energies, and the Madrid government allowed him to return to Spain some months before he died at Burgos, of heart disease.