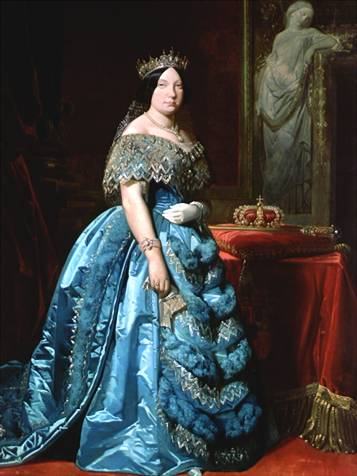 Isabella was born in in 1830, the eldest daughter of Ferdinand VII, king of Spain, and of his fourth wife and niece, Maria Cristina, who was a Bourbon and also a grand-niece of . Maria Cristina became queen-regent on , , when her daughter Isabella, at the age of three years, was proclaimed queen on the death of the king.

Isabella succeeded to the throne because Ferdinand VII induced the "" to help him set aside the introduced by the Bourbons in the early 18th century, and to re-establish the older succession law of Spain. The first pretender, Ferdinand's brother Carlos, fought seven years, during the minority of Isabella, to dispute her title. His supporters and descendants were known as Carlists and the fight over the succession was the subject of a number of s in the 19th century.

Isabella's throne was only maintained through the support of the army. The "Cortes" and the Liberals and Progressives, who at the same time established constitutional and parliamentary government, dissolved the religious orders, confiscated their property (including that of ), and tried to restore order in finances. After the Carlist war the queen-regent, Maria Cristina, resigned to make way for , the most successful and most popular Isabelline general, who remained regent for only two years.

He was turned out in 1843 by a military and political "pronunciamiento" led by Generals O'Donnell and Narvaez, who formed a cabinet, presided over by , and this government induced the "Cortes" to declare Isabella of age at 13. Three years later, the Moderado party or Castilian Conservatives made their sixteen-year-old queen, marry her double-first cousin, Francisco de Asís de Borbón (1822&ndash;1902), the same day (, ) that her younger sister, Infanta Luisa Fernanda, married Antoine d'Orléans, Duke of Montpensier.

These marriages suited France and Louis Philippe, King of the French, who nearly quarrelled in consequence with Britain. But the marriages were not happy; persistent rumor had it that few if any of the Spanish Queen Regnant's children were conceived by her , a . For instance, the heir to the throne, who later became Alfonso XII, the Carlist patry asserted had been conceived by a captain of the guard, .

Isabella had twelve children, but only four reached adulthood:

Isabella reigned from 1843 to 1868, a period of palace intrigues, back-stairs and antechamber influences, conspiracies, military "pronunciamientos" to further the ends of the political parties &mdash; Moderados who ruled from 1846 to 1854, Progressives from 1854 to 1856, Unión Liberal from 1856 to 1863. Moderados and Unión Liberals quickly succeeded each other and kept out the Progressives, thus sowing the seeds for the revolution of 1868.

Isabella often interfered in politics in a wayward, unscrupulous way that made her very unpopular. She showed most favour to her reactionary generals and statesmen and to the Church and religious orders, and was constantly the tool of corrupt and profligate courtiers and favourites who gave her court a bad name. She went into exile at the end of September 1868, after her Moderado generals had made a slight show of resistance that was crushed at the by Marshals Serrano and Prim. Other events of her reign were a war against Morocco (1859), which ended in an treaty advantageous for Spain and cession of some Moroccan territory; the fruitless against and ; tensions with the United States; independence revolts in Cuba and Puerto Rico; and some progress in public works, especially s, and a slight improvement in commerce and finance.

Her exile helped cause the , as could not accept the possibility that a German, Prince Leopold of , might replace Isabella, who was a Bourbon (a member of the old French royalty).

Isabella was induced to abdicate in on , , in favour of her son, Alfonso XII, and the cause of the restoration was furthered. She had separated from her husband in the previous March and continued to live in France after the restoration in 1874. On the occasion of one of her visits to Madrid during Alfonso XII's reign she began to intrigue with the politicians of the capital, and was peremptorily requested to go abroad again. She resided in Paris for the rest of her life, seldom traveling abroad except for a few visits to Spain. During her exile she grew closer to her husband, with whom she maintained an ambiguous friendship until his death in 1902. Her last days were marked by the matrimonial problems of her youngest daughter. She died on , , and is entombed in .

At the change, a new format of the titulary was taken into use for Isabella: "Por la gracia de Dios y la Constitución de la Monarquía española, Reina de las Españas" ("By the grace of God and the Constitution of the Spanish monarchy, Queen of the Spains").

"This article incorporates text from the ."