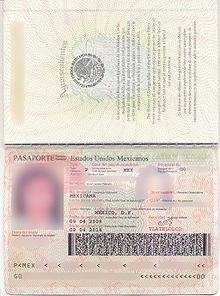 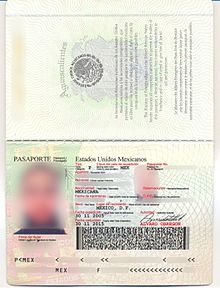 Passport's note and data pages of the passport issued until 2008

The information page ends with the Machine Readable Zone.

The passports contain a note from the issuing state that is addressed to the authorities of all other states, identifying the bearer as a citizen of that state and requesting that he or she be allowed to pass and be treated according to international norms. The note inside the Mexican passports state:

The Ministry of Foreign Affairs of the United Mexican States hereby requests all competent authorities to permit the holder of this passport, a Mexican national, free transit without delay or hindrance and in case of need to give him all lawful aid and protection. 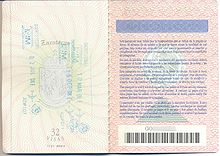 Last page and back cover of the current Mexican Passport (2008)

The textual portions of the Mexican passports is printed in Spanish, English and French.

The Ministry of Foreign Affairs of Mexico announced in the last days of 2009, that it was expecting that, during 2010, the Mexican Passport will include the totality of the biometric data of the bearer. This project includes taking pictures of the iris and the 10 fingerprints. The current passport only has pictures of the 2 index fingers. The electronic passport is not yet avalilable.