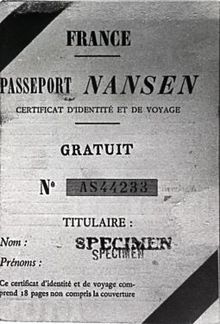 The front of a Nansen Passport.

Designed in 1921[1] by Fridtjof Nansen, in 1942 they were honored by governments in 52 countries and were the first refugee travel documents. Approximately 450,000 Nansen passports were issued, helping hundreds of thousands of stateless people to immigrate to a country that would have them.

The Nansen passport was developed as a result of a series of citizenship laws in European countries, including but not limited to the United Kingdom, Germany and France, that excluded millions of ethnic minorities, which were erstwhile residents in their countries, from attaining citizenship. Hundreds of thousands of them stayed permanently abroad.

The Nansen International Office for Refugees was awarded the 1938 Nobel Peace Prize for its efforts to establish the Nansen passports.[2]

While Nansen passports are no longer issued, present national authorities, including the United Nations, issue documents for stateless people and refugees. These include: Certificate of Identity (or "alien's passport"), the "Refugee Travel Document" and the United Nations laissez-passer.