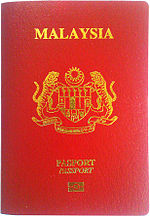 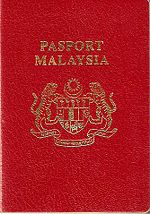 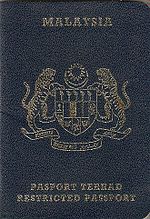 The Malaysian passport (Malay: Pasport Malaysia) is the passport issued to citizens of Malaysia by the Immigration Department of Malaysia (Jabatan Imigresen Malaysia). They were formerly designated Paspot Malaysia, but the spelling was changed to Pasport in the 1980s.

The main legislation governing the production of passports and travel documents, their possession by persons entering and leaving Malaysia, and related matters is the Passport Act 1966.

Processing of Malaysian passport applications and renewals are very rapid, following the introduction of passport renewal kiosks (KiPPas), which allow passport applicants to collect their new passport about an hour after applying and paying using the KiPPas kiosk.[1]

Holders of Malaysian passports enjoy visa-free travel to many nations around the world. According to a 2010 study conducted by Henley & Partners, a company specializing in immigration and citizenship matters, that created a global index ranking countries according to the visa free privileges enjoyed by their citizens. Malaysia, with a score of 151, ranked 13th in the world, ahead of places like Hong Kong, Russia, and Thailand but still lagging the United Kingdom, the top ranked country with a score of 166.[2]

Malaysia was the first country in the world to issue biometric passports in March 1998, after a local company, IRIS Corporation, developed the technology.[3] In December 2002, thumbprint data was added to the biometric data on the passport chip. Similar technology is used in the Malaysian identity card, MyKad.

The biometric data included on the Malaysian passport is a digital photograph of the bearer's face, and images of their two thumbprints. Malaysian immigration checkpoints were the only ones with the technology to read and authenticate the data from the RFID chip using a fingerprint scanner and facial recognition technology, but widespread adoption of ePassport technology around the world has seen the technology installed in international airports in the USA, the UK and other countries.

In addition to biometric data and the personal information stored on the information page, the chip also records the bearer's travel history of the last ten entry and exits at Malaysia border control points.

Concern about possible "cloning" of the data from the passport chip for the purposes of identity theft prompted IRIS to issue a press release in 2006, stating that the chip and data had never been successfully cloned, and that digital keys stored on each chip made such duplication and forgery impossible.[4]

On February 2, 2010, Malaysia started issuing ICAO compliant e-Passport, valid for five years or two years, replacing the current one. It is the 75th nation in the world to adopt the ICAO standard. The implementation of the new passport begins at offices across Klang Valley, Johor and Pahang before expanding nationwide between March and May 2010 and to foreign mission abroad between July and August 2010.

There are five types of Malaysian passports:

The regular international passport issued starting February 2010 is ICAO-compliant biometric and machine-readable. The biometric passport contains an 8 kB microchip which was developed by a Malaysian technology firm, IRIS Corporation.

The passport is also used by citizens from Peninsular Malaysia to enter Sabah and Sarawak, as these two states have autonomy in immigration affairs. However, citizens travelling directly from Peninsular Malaysia may produce a Malaysian identity card, or birth certificate for children below 12 years, obtain a special immigration printout form (Document In Lieu of Internal Travel Document, IMM.114) at immigration counters for social/business visits up to 3 months, and keep the form until departure. [6]

As Malaysia does not recognize nor have diplomatic relations with Israel, [7] Malaysian passports bear the inscription: "This passport is valid for all countries except Israel". However, this does not prevent Israel from issuing visa on a separate sheet of paper to Malaysian citizens for entering Israel, and Malaysians, primarily Christians, have visited Israel for religious purposes. Likewise, Israeli passport holders are not permitted to enter Malaysia without written permission from the Malaysian Ministry of Home Affairs.

The Official Passport is issued exclusively to Malaysian government officials travelling on official business. It is issued by the Immigration Department of Malaysia upon request through the Ministry of Foreign Affairs (Wisma Putra).

A special Hajj passport issued to those making a hajj pilgrimage to Mecca. This passport is issued through the Tabung Haji.

The Malaysian Restricted Passport is a travel document for restricted to travel between Malaysia and certain adjacent territories:

Malaysia stopped issuing and renewing Restricted Passports to Singapore as of 1 January 2006, and announced that they would no longer be valid for travel from 31 December 2006. As Singapore requires a passport to be valid for at least six months for entry, it announced that it would stop accepting the Restricted Passport as a valid travel document from 1 July 2006, however this was postponed to 1 November on the Malaysian government's request.[8]

The passports contain a note, written in Malay and English, from the issuing state that is addressed to the authorities of all other states, identifying the bearer as a citizen of that state and requesting that he or she be allowed to pass and be treated according to international norms. In Malay, the note inside Malaysian passports reads:

and in English, the note reads:

The data page/information page are printed in Malay and English.

Due to Malaysia's heterogeneous ethnic demographic, including substantial Chinese and Indian minorities as well as Malays, the name of the bearer on the Malaysian passport is displayed using that person's customary naming practice as it is on the person's identity card (MyKad) or birth certificate. Surname and given name fields are not differentiated on the passport, and this can cause difficulties or confusion in some countries as the placement of the surname is not consistent.

Technically speaking, every Malaysian name regardless of the ethnicity is of this type: SURNAME, FIRST NAME UNKNOWN (FNU) when only the Machine Readable Zone area of the Passport Biodata Page is considered. There is no '<<' to isolate what is technically a 'Surname' from the 'Given Name' (Please note that ICAO standards require that the name that immediately follows the three-letters country code in the Machine Readable Zone (MRZ) to be the surname of the passport holder). When swiped at international airports for border security purposes, for example: the Advanced Passenger Information System (APIS) for countries such as Australia, New Zealand and United States, the name of a Malaysian passport holder in its entirety will be captured in the 'Surname' field of the border security system, and this can sometimes cause a mismatch with how the passport holder's name is captured in the country of destination's visa system or electronic travel authority protocol. Examples of Malaysian names as printed on the Machine Readable Zone (MRZ) of the passport:

As can be seen from the above examples, it's evident that a name in a Malaysian Passport technically does not contain 'Given Name(s)' because '<<' is not used at all to isolate Surname from Given Names. Now, compare how a name is recorded in the Australian Passport:

Notes: 'P' stands for Passport. 'MYS' and 'AUS' stand for Malaysia and Australia respectively in the Machine Readable Zone. For clarity: Surnames in block letters and Given Names in title case for examples of Australian names.

The Malaysian identity number is a unique ID number allocated to each Malaysian, and the same number is used on the MyKad identity card. The number is in the following format: