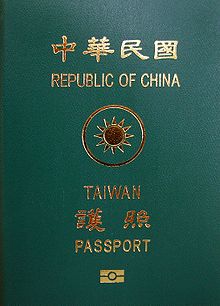 Cover of the Republic of China biometric passport issued in 2009. The word "Taiwan" was added in English (but not in Chinese) in 2003. The DPP government at the time stated this was to facilitate travel, and not to change the name of the nation.[1]

The Republic of China passport (traditional Chinese: 中華民國護照; simplified Chinese: 中华民国护照; pinyin: Zhōnghuá Mínguó hùzhào) is the national passport issued to nationals of the Republic of China (ROC) with household registration in the Taiwan Area and certain Overseas Chinese. It is commonly known as the Taiwanese passport,[2][3][4][5] as the ROC has been commonly known as "Taiwan" since the 1970s. 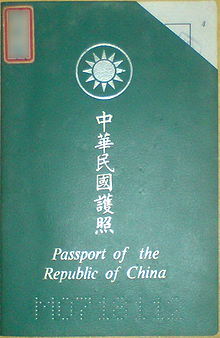 Republic of China passport issued in 1982

The ROC was founded in 1912 governing the whole of mainland China. In 1945, the ROC gained control of Taiwan from Japan. Since the Chinese Civil War in 1949, ROC has retained control of the territory of Taiwan, while mainland China has come under the control of the People's Republic of China (PRC). The ROC constitution does not recognize the PRC so the ROC still legally considers itself as the sole government of China. All the territory under ROC control is constitutionally defined as the Free Area (also known as "Taiwan Area"), while the territory outside Taiwan Area is defined as the "Mainland Area". The ROC constitution allows the ROC government to make laws for one Area of the country without affecting the other Area.[citation needed].

ROC nationals who also hold household registration in the Taiwan Area are eligible for the ROC passport. While the passport shows the holder is a ROC national, it is not conclusive evidence that the holder is a citizen of the Republic of China as, according to the nationality law of ROC,[6] there is no implication of citizenship. Additionally, not all ROC passport holders have the right of abode in the Taiwan Area.

In addition to Taiwan residents, certain Overseas Chinese are eligible to receive the ROC passport. This includes persons born abroad to parents with ROC passports, persons born in Mainland China, Hong Kong and Macau with residency status abroad, Chinese residents of Hong Kong and Macau who obtained a passport prior to 1997 and 1999 respectively, and persons who obtained a passport solely on the basis of Chinese ethnicity prior to 2002.

Chinese residents in Mainland China, Hong Kong and Macau are legally ROC nationals, and they may also obtain an ROC passport under special circumstances, provided they have permanent residence status in a country outside the ROC constitutional claims and do not hold a non-Chinese passport. The special circumstances are, from Article 18 of the Enforcement Rules of the Passport Act of 2002, "Special considerations for political, economic, social, educational, technological, cultural, athletic, overseas Chinese, religious, and humanitarian reasons."[7] Before the handovers of Hong Kong and Macau, Chinese residents of those territories were treated as Overseas Chinese and were automatically eligible to hold a ROC passport without having to establish residency in a country outside the ROC constitutional claims.

Before the revision to the Enforcement Rules of the Passport Act in 2002, ethnic Chinese who obtained Overseas Chinese Identity Certificates (on the basis of having Chinese ethnicity) could use these Certificates to claim ROC Nationality and obtain passports, regardless of whether they have lived or even set foot in the Taiwan Area. (see here for an explanation on its rationale) After 2002, these Certificates are no longer recognized as proof of ROC Nationality if they were granted on the basis of Chinese ethnicity alone, by Article 13. Note that under Article 3 of the Overseas Compatriot Identity Act, persons holding People's Republic of China passports were never eligible to obtain this Certificate.[8]

The ROC passport does not automatically grant the holders right of abode in the Taiwan Area. Only ROC passport holders who also hold household registration in the Taiwan Area, and whose passports therefore show a national identification number, are exempt from immigration restrictions in Taiwan. Other ROC passport holders are issued landing visas upon arrival in Taiwan and are subject to deportation. It is the Republic of China National Identification Card, which is only issued to ROC citizens with household registration in Taiwan, that is used to exercise citizenship rights such as through voting.

Passports of overseas Chinese (as opposed to passports of ROC citizens with household registration in Taiwan) are issued only in ROC embassies, consulates, and Taipei Economic and Cultural Offices and not in Taiwan itself and contain a special stamp indicating overseas Chinese status (which also exempts the holder of conscription). Similarly, not all British passport holders have the right of abode in the United Kingdom, however they do have the right of abode in some area(s) under British jurisdiction. Contrastingly, holders of overseas Chinese passports have no right of abode in any area under ROC jurisdiction. Under relevant US laws, holders of these overseas Chinese passports which are (by definition) without a national identification number and without unrestricted right to enter and/or reside in Taiwan do not satisfy the definition of a passport under INA 101(a)(30). Such persons are considered stateless for US visa issuing purposes.[9]

Since May 21, 2000, the validity of a ROC passport is 10 years for general holders or 5 years for minors aged under 16.[10] However, an ROC passport is valid for just 3 years for young male adults who have not yet served the ROC conscription.[11]

Republic of China passport issued in 1946

Regular passport's cover is dark green in color with gold lettering. The National Emblem of the Republic of China and the wording "Republic of China" and "Passport" in Chinese and English are printed on the cover. Because the "Republic of China" has been commonly known as "Taiwan" internationally since the 1970s, many Taiwanese travelers have experienced difficulties with immigration officials overseas mistakenly believing that they were from mainland China (People's Republic of China). In September 2003, under the administration of President Chen Shui-bian, the word "Taiwan" was added to the ROC passport cover in English (but not in Chinese). The premier when asked during question time in the Parliament stated that this was to facilitate travel and did not change the name of the nation.

The interior is in traditional Chinese and English. Until the mid-1990s, the passport also contained an entry for provincial citizenship, stating the Chinese province and county of one's ancestral home, but this field has been eliminated. However, the Chinese province and county of birth is still listed in the birthplace entry if the passport holder was born in either mainland China or Taiwan.

ROC passports identify the issuing country with the ISO code "TWN", where mainland Chinese, HKSAR and MSAR passports all bear the code "CHN".

On November 25, 2008, the Ministry of Foreign Affairs of Republic of China announced that it will be starting to issue biometric passport on December 29, 2008[12]. The "Taiwan" wording on the cover will still be kept.

Even though the Republic of China maintains official relations with only 23 countries, the ROC passport is still accepted as a valid travel document in virtually all the countries of the world, although in practice some countries (e.g. Singapore, Laos, Nepal, Vietnam, Brazil and Kenya) opt not to directly stamp on it. Instead, these countries issue the visa on a separate sheet which is stapled to the ROC passport, and only stamp entry and exit stamps on the visa. Malaysia also had this practice until March 2009 when the Malaysian government decided that Malaysian visas be directly issued to and stamped on the ROC passport.

Due to the special political status of Taiwan, neither the PRC nor the ROC recognizes the passports issued by the other, and neither party formally considers travel between mainland China and Taiwan as "international" travel. Taiwan residents must obtain an additional travel document, the "Mainland Travel Permit for Taiwan Residents" (台湾居民来往大陆通行证) to enter mainland China. A valid ROC passport is required to apply for the Mainland Travel Permit, and may be required to be presented to PRC immigration officials to further confirm its holder's identity.

During both Portuguese and the PRC administration, Macau authorities regard ROC passports as valid travel documents,[citation needed] although Macau immigration officers do not stamp ROC passports. Instead they place an entry and exit stamp onto the Arrival/Departure card, which shall eventually be recalled upon the visitor's departure from the territory.[citation needed] Macau authorities unilaterally grant ROC passport holders 30-day visa-free access to Macau.