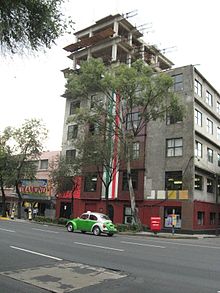 The Labor Party (Partido del Trabajo, abbreviated as "PT") is a nationally recognized political party in Mexico. It was founded on December 8, 1990. The party is currently led by Alberto Anaya.

The PT's roots lay in a network of community organizations formed by Maoist activists. The party first participated in federal elections in 1991, but it failed to win 1.5 percent of the vote (the amount necessary to be recognized as a national party). In 1994, Rosario Ybarra, the prominent activist, became the presidential candidate but later declined in favor of Cuauhtémoc Cárdenas.

In 1998 the PT allied with the larger Democratic Revolution Party (PRD) for the first time in the state of Zacatecas. In the 2000 elections, the party took part in the PRD-led Alliance for the Good of All. As part of the Alliance, it won 7 seats in the Chamber of Deputies and 1 seat in the Senate.

In November 2005, the PT endorsed the PRD's candidate for President, Andrés Manuel López Obrador for the July 2006 elections. In these elections the party won 12 out of 500 seats in the Chamber of Deputies and 3 out of 128 Senators.

In October 2006, the PT further allied itself with the PRD and the Convergence Party to form the Progressive Broad Front (FAP for its Spanish initials), which was granted the register by the Federal Electoral Institute.