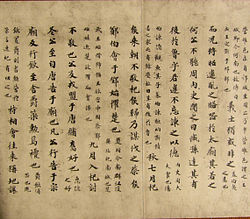 The Spring and Autumn Annals is the official chronicle of the State of Lu covering the period from 722 BCE to 481 BCE. It is the earliest surviving Chinese historical text to be arranged on annalistic principles. The text is extremely concise and, if all the commentaries are excluded, about 16,000 words long. Because of this its meaning can only be appreciated with the aid of ancient commentaries, especially the traditional Commentary of Zuo.

Because it was traditionally regarded as having been compiled by Confucius (after a claim to this effect by Mencius), it was included as one of the Five Classics of Chinese literature. However, few modern scholars believe that Confucius had much influence on the formation of the text; this is now assigned to various chroniclers from the State of Lu.

In early China, "spring and autumn" was a commonly used metonymy for the year as a whole, and the phrase was used as a title for the chronicles of several Chinese states during this period. For example, the chapter of Obvious Existence of Ghosts in the Mozi refers to numerous Spring and Autumn Annals of Zhou, Yan, Song and Qi. All these texts are now lost; only the chronicle of the State of Lu has survived.

The scope of events recorded in the book is quite limited. The focus is on various feudal states' diplomatic relations, alliances and military actions, as well as births and deaths among the ruling families. The chronicle also takes note of natural disasters such as floods, earthquakes, locusts and solar eclipses, since these were seen as reflecting the influence of heaven on the world of humans.

Events are narrated in chronological order, dated by the reign-year of the Duke of Lu, the season, the month and the day according to the Chinese sexagenary cycle. The annalist structure is followed strictly, to the extent of listing the four seasons of each year even when no events are recorded.

The style is terse and impersonal, and gives no clue as to the actual authorship.

Since the text of this book is terse and its contents limited, a number of commentaries were composed to explain and expand on its meanings. The Book of Han vol. 30 lists five commentaries:

The Commentary of Zuo, also known as the Zuo Zhuan, composed in the early 4th century BCE, is a general history covering the period from 722 to 468 BCE which follows the succession of the rulers of the State of Lu. Modern scholars disagree about whether it is truly a commentary on the Spring and Autumn Annals or an independent work. In any case, scholars have found it by far the most useful among the three surviving 'commentaries' both as a historical source for the period and as a guide to interpreting the Annals.