The Great Learning (simplified Chinese: 大学; traditional Chinese: 大學; pinyin: Dà Xué)[1] was one of the "Four Books" in Confucianism. The Great Learning had come from a chapter in the Classic of Rites which formed one of the Five Classics. It consists of a short main text attributed to the teachings of Confucius and then ten commentary chapters accredited to one of Confucius' disciples, Zengzi. The ideals of the book were supposedly Confucius's; however the text was written after his death.

The "Four Books" were selected by the neo-Confucian Zhu Xi during the Song Dynasty as a foundational introduction to Confucianism and examinations for the state civil service in China.

Confucius, who incorporated ideas from earlier philosophers, compiled or edited the Classic of Rites, the Five Classics and the Spring and Autumn Annals. Confucius' student, master Zengzi wrote the introduction and exposition of the Great Learning. Zeng Zi lived from 505-436 BC. Confucius taught 3000 pupils; of which 72 mastered the six arts. It is still unclear how much his students wrote and edited.

The Great Learning developed from many authors adapting to the needs and beliefs of the community at the time. The Cheng brothers, Yi (1033–1107) and Hao (1032–1085) both utilized the Great Learning's philosophies. Their ideas met with strong official opposition, but were reconstituted by Zhu Xi. Cheng's idea of yi was that it was identical with nature, which he believed was essentially good. Cheng's yi emphasized the necessity of acquiring knowledge.[2]

During the Southern Song Dynasty, Zhu Xi rearranged the Great Learning and included it in the Four Books, along with the "Doctrine of the Mean", the Analects of Confucius and the Mencius. Zhu Xi separated the Great Learning, which was originally a chapter in the Classic of Rites.[3] Zhu Xi organized the book as Jing followed by ten expositions. Zhu Xi was a student of Li Tong. Zhu Xi developed the Chengs' Confucian ideas and drew from Chan Buddhism and Daoism. He adapted some ideas from these competing religions into his form of Confucianism.

Such critics such as Lu Xiangshan and Wang Yangming later disliked the great learning because of the stress on scholarship rather than action. Wang Yangming rejected Zhu Xi's changes and returned the text to the original, from the Classic of Rites. During the Han dynasty the Great Learning rose to prominence, and the Classic of Rites had to be re-organized by Dai De and Dai Shang. The Dais divided the book into five sections. This included the Great Learning, the Doctrine of the Mean, the Evolution of Rites, the Yili, and the "Etiquette and Rites" .

There is a popular commentary by philosopher Zhang[who?] written by his disciples. Han Yu and Li Ao both used The Great Learning. Li Ao incorporated a lot of Buddhist and Taoist ideas into his work. Zi Si – Confucian's grandson – is said to have taught Mencius and written the Doctrine of the Mean. He may also have written the beginning of the Great Learning. Ma Yung edited the Great Learning in the Han dynasty, giving his views of the general meaning.[4]

Meaning of "Investigation of Things"

One of the first steps to understanding The Great Learning is to understand how to "investigate things". This did not consist of scientific inquiry and experimentation, but introspection, building on what is already "known" of "principle".[5] True introspection was supposed to allow the mind to become all knowing with regards to morality, relationships, civic duty and nature.[6] 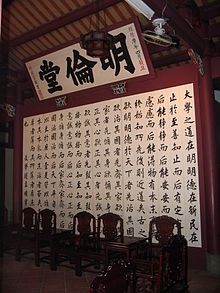 Reproduction of a rendition of "Great Learning" by Yuan calligrapher Zhao Mengfu at the Confucian temple in Tainan, Taiwan.

The Way of the Great Learning involves manifesting virtue,
renovating the people, and abiding by the highest good. (...)
大學之道在明明德，在親民，在止於至善 (...)
The ancients who wished to illustrate illustrious virtue throughout the
world, first ordered well their own States.
古之欲明明德於天下者，先治其國
Wishing to order well their States, they first regulated their families.
欲治其國者，先齊其家
Wishing to regulate their families, they first cultivated their persons.
欲齊其家者，先修其身
Wishing to cultivate their persons, they first rectified their hearts.
欲修其身者，先正其心
Wishing to rectify their hearts, they first sought to be sincere in their thoughts.
欲正其心者，先誠其意
Wishing to be sincere in their thoughts, they first extended to the utmost of their knowledge.
欲誠其意者，先致其知
Such extension of knowledge lay in the investigation of things.
致知在格物
Things being investigated, knowledge became complete.
物格而後知至
Their knowledge being complete, their thoughts were sincere.
知至而後意誠
Their thoughts being sincere, their hearts were then rectified.
意誠而後心正
Their hearts being rectified, their persons were cultivated.
心正而後身修
Their persons being cultivated, their families were regulated.
身修而後家齊
Their families being regulated, their States were rightly governed.
家齊而後國治
Their States being rightly governed, the entire world was at peace.
國治而後天下平
From the Son of Heaven down to the mass of the people, all must
consider the cultivation of the person the root of everything besides. (...)
自天子以至於庶人，壹是皆以修身為本 (...)

The Great Learning is significant because it expresses many themes of Chinese philosophy and political thinking, and has therefore been extremely influential both in classical and modern Chinese thought. Government, self-cultivation and investigation of things are linked. It links together individual action in the form of self-cultivation with higher goals such as ultimate world peace as well as linking together the spiritual and the material.

Basing its authority on the presumed practices of ancient kings rather than nature or deities, the Great Learning both links the spiritual with the practical, and creates a vision of the Way that is radically different than that presented by Taoism.

The Great Learning and Education in China

The Great Learning as we know it today is the result of multiple revisions and commentaries by a number of Confucian and Neo-Confucian scholars. The Great Learning, along with the Doctrine of the Mean had their beginnings as chapters within the Book of Rites. The Da Xue, along with the Doctrine of the Mean were removed from the Book of Rites and designated as separate, and equally significant, works by the Neo-Confucian scholar Zhu Xi (Chu Hsi). In the winter of 1190 C.E. Zhu Xi published the Four Masters (Ssu-tzu), a collection of the Great Learning, Doctrine of the Mean, the Mencius and the Analects (Gardner, Principle and Pedagogy, 64). These four texts soon became the initial basis of study in the Chinese imperial examination system. Zhu Xi was prompted to refine the Da Xue and incorporate it into the curriculum as he felt that the previously utilized Classics were lengthy and too difficult to comprehend by the common individual to be used as an educational foundation for Confucian thought. (Gardner, Principle and Pedagogy, 64). Utilizing the much shorter and more comprehensible Four Books would allow Zhu to reach a much greater audience (Gardner, Principle and Pedagogy, 63). To aid in comprehension of the Da Xue, he spent much of his life studying the Great Learning and published a series of commentaries explaining the principle teachings of the text. The Da Xue (Ta Hsueh) itself gets its name from "tu-jen chih hsueh," referring to the education of adults. Unlike many scholars before him, Zhu Xi presents the Great Leaning as the Way of self cultivation and governance that is to be studied by all people, not only those in, or seeking, political office ( Gardner, Confucian Commentary,192).

Impact on the Education in China

Although the Imperial Examination System is no longer used as a means of determining one's place in the social hierarchy, education and the teachings of the Great Learning remain an integral part of modern educational and political culture in China. In fact, a number of scholars believe that all education in mainland China is based on Confucianism to some degree although many individuals, students and teachers alike, are unaware of the Confucian influence on their education. The Great Learning was written and latter published as its own book, to serve as an introduction and foundational guide for the further study of Confucian texts. The Great Learning provides a step-by-step illustration of how all aspects of society, ranging from the refinement of the self to the order within one's household or state is ultimately dependent upon the expansion of one's knowledge (Wang 2).

Effects on the Education in Modern China

The Great Learning played a major role in Chinese politics as is comprised one of the texts incorporated into the Imperial service examination system. Students would be tested on their knowledge of the Five Classics and Four Books as a qualification for an occupation in political office. If a student possessed adequate knowledge of the texts, they would be awarded a prestigious place in government. These exams allow anyone of sufficient knowledge and skill to obtain a place in office, as exams were based solely on one's ability. One's social or financial status did not play a role in the exam system. The text of the Great Learning provides an educational basis for those aspiring obtain a leadership role. In addition to self-cultivation and the expansion of one's knowledge, the Great Learning goes into significant step-by-step detail with respect to the qualities of a proper ruler. The text then goes on to describe the projected quality and stability of the state if its ruler follows the guidelines described therein. One such passage states that a person should "cultivate himself, then regulate the family, then govern the state, and finally lead the world into peace" There are two common interpretations of this passage. One common interpretation of this passage is that before one can hope to successfully lead the people, he/she must first cultivate himself (herself) by bringing order to. One may also interpret this passage to be stating that once one has reach a sufficient level of cultivation, he/she should seek a position in office with which to lead the people of the state in accordance with the values and practices outlined in the Great Learning and other such Confucian and Neo-Confucian texts (Wang 3).

A term used in the text, "qin-min" (親民) which James Legge, following Zhu Xi, amended to "xin-min" (新民) and translated "renovating the people" instead of "loving the people". It became the name of the People First Party (Republic of China), one of the minor parties in Taiwan.

The Great Learning is significant because it expresses many themes of Chinese philosophy and political thinking, and has therefore been extremely influential both in classical and modern Chinese thought. The Great Learning represented a key aspect of the Chinese curriculum for nearly 1500 years and can be found in virtually all aspects of Chinese culture. The Great Learning within the Chinese curriculum acted as a "springboard" for further learning, "self cultivation and investigation of things." Through self-cultivation one can bring order and harmony to one's mind, personal life, family, state and the world as a whole. By defining the path of learning (Dao) in governmental and social terms, the Great Learning links the spiritual realm with daily life, thus creating a vision of the Way (Dao) that is radically different than that of non-action as presented by Daoism. The Great Learning,on the other hand, requires action on the part of the individual towards the ultimate goal of self-cultivation through the "expansion of knowledge and the investigation of things." The Great Learning presents Confucianism as being this-worldly rather than other-worldly. As opposed to basing its authority on an external deity, the Great Learning bases its authority on the practices of ancient kings.