pronunciation (help·info)) is a city in Chile, capital of Concepción Province and of the Biobío Region or Region VIII. Greater Concepción (Gran Concepción, including Talcahuano, San Pedro de la Paz, Hualpén, Chiguayante, Penco, Tomé, Lota, Coronel, Hualqui and Concepción) is the second-largest conurbation in the country, with 889,725 inhabitants (2002 census). Individually, it is the 11th largest commune in the country, with a population of 212,003.

Concepción was founded by Pedro de Valdivia[FN 1] in 1550 north of the Bío-Bío River, at the site which is today known as Penco. At that time it was given the name Concepción del Nuevo Extremo. The new settlement of Concepción was just a few kilometers north of La Frontera (The Frontier), the boundary between Spanish territory and the land of the Mapuche, an American Indian ethnic group that remained independent until the 1870s. The settlement was formally recognized by the Spanish authorities as a town two years later by a royal decree. It was given a coat-of-arms that is still in use today.

Although Concepción was a significant military settlement for the Captaincy-General of Chile, it was overrun and destroyed by Mapuche armies in 1554, and once again after being refounded in 1555. Concepción was restored during the governorship of García Hurtado de Mendoza when he landed there and built a fort on the Alto de Pinto in 1557. The town was refounded once more on January 6, 1558, by captain Jerónimo de Villegas. It became the headquarters of the military forces engaged against the Mapuche in Araucanía over the next two centuries, growing to a population of 10,000 despite a siege in 1564 and other attacks by the Mapuche. Concepción was the home of the Real Audiencia from 1565 to 1575.

The new site for the town of Concepción became the main town of the Intendancy of Concepción, whose jurisdiction extended from the Maule River to La Frontera. The first Intendant of Concepción was the Irishman Ambrose O'Higgins, Marquis of Osorno, who later became Royal Governor of Chile and Viceroy of Peru.

When the First National Government Board met in Santiago on September 18, 1810, citizens of Concepción joined up. Concepción was used as the point of entry by the Spanish Army in the attempt by the Viceroyalty of Peru to re-conquer Chile. Concepción politicians and soldiers became a significant political force in the newly-independent country.

On January 1, 1818, Ambrose O'Higgins's son, Bernardo O'Higgins, proclaimed and took the oath of the Chilean War of Independence in the main square of Concepción, which since then has been known as "Plaza de la Independencia". On February 20, 1835, the town again was largely destroyed by an earthquake and had to be rebuilt.

As of 2010, Concepción is the second largest city of Chile. The Universidad de Concepción, founded in 1919, became the first private university in Chile. The neighboring harbor of Talcahuano is the site of the largest naval base in Chile. 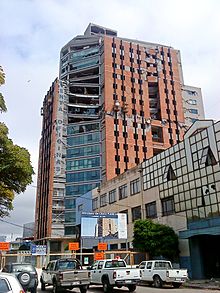 On February 27, 2010, an 8.8 magnitude earthquake struck the city of Concepción, killing more than 521 people and injuring thousands nationwide. Following the earthquake, geologists relying on global positioning satellite (GPS) data concluded that the city had been displaced roughly 3 meters (10 feet) to the west as a result of the event.[2] Fortunately, the city avoided the tsunami that followed the earthquake.[3]

After the 2010 Chile earthquake, a prison riot began in Concepción's El Manzano prison following a failed escape attempt by the internees. Different parts of the prison were set on fire and the riot was controlled only after the guards shot into the air and received help from military units.[4] As of 5 March 2010, a Peruvian field hospital has been deployed to the city.[5]

The climate of Concepción is classified as Köppen climate classification csb, with a dry summer nadir in February. Despite the csb classification, the climate is generally considered oceanic, because for most of the year it resembles an oceanic climate. The climate's oceanic influence keeps temperatures mild throughout the year. Temperatures rarely exceed 30°C or decrease below -3°C. In the five-month period between May and October, the city receives approximately 83% of it's total annual precipitation, which totals 1,110 mm (44 in). The chart at right provides a climate summary for Concepción; additionally the weather box belows covers the information in higher detail.

Between 1970 and 1982 there is a large increase in the population. One reason is the inclusion of San Pedro, segregated from the municipality of Coronel.

The Concepción commune population declined sharply because in 1996 it was divided, creating Chiguayante and San Pedro de la Paz. In these communes the population has grown quickly since they have become bedroom communities of Concepción, i.e. residential cities that do not have a center with many shops, such as Concepcion.

There is a significant percentage of foreign residents in the city, the most numerous are the Spanish, Italian and U.S. expatriate communities. Also are smaller segments of German, French, British, Dutch, Greek, Portuguese, Croatian, Scandinavian, Arab and Australian descendants in a city settled by waves of immigration. 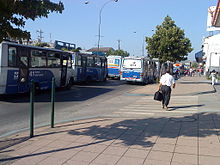 Public transport; blue in lower and gray in upper 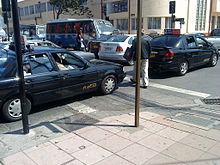 Traffic jam in street of Concepcion

Basketball is also played at a high professional level. The most notable team is: 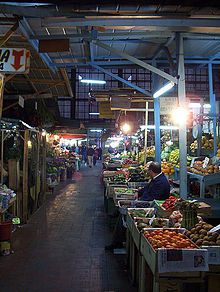 Concepción is the second commercial nucleus of Chile. In the image, the Concepción Central Market

Historically characterized by a strong manufacturing industry, Concepión has also been a major center for distribution and services and the financial basis of the regional economy.

Trade in the city is concentrated in the Plaza Independencia (Independence Square), the pedestrian street Alonso de Ercilla y Zúñiga (built in 1981), and along the major avenues. One such avenue is the Diego Barros Arana street which has developed into the commercial center of the city and the region was until 1907 even known as "calle Comercio" ("Commerce Street"). New commercial centers are being developed around the old central station and the new civic district as a part of the Chilean bicentennial (September 18, 2010). A considerable percentage of local trade is taking place in settlements around the city.

Within the electoral divisions of Chile, Concepción is represented in the Chamber of Deputies by José Miguel Ortiz (PDC) and Enrique Van Rysselberghe (UDI) as part of the 44th electoral district, (together with San Pedro de la Paz and Chiguayante). The commune is represented in the Senate by Alejandro Navarro Brain (MAS) and Hosain Sabag Castillo (PDC) as part of the 12th senatorial constituency (Biobío-Cordillera).

About eight or nine cities have sister city associations, including one in the USA.