Osorno is a city and commune in southern Chile and capital of Osorno Province in the Los Lagos Region. It had a population of 145,475, as of the 2002 census. It is located 945 kilometres (587 mi) south of the national capital of Santiago, 105 kilometres (65 mi) north of the regional capital of Puerto Montt and 260 kilometres (160 mi) west of the Argentine city of San Carlos de Bariloche, connected via International Route 215 through the Cardenal Antonio Samoré Pass. 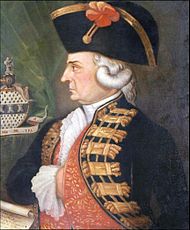 The city was originally planned to be founded in 1553, under the Government of Pedro de Valdivia by his companion of conquest, Lieutenant General Don Francisco de Villagra; with the name of Santa Marina de Gaete, on the site of a Huilliche village named Chauracavi. However, the death of Valdivia prevented the realization of this plan when he was about to materialize.

On March 27, 1558, the city is finally founded by the governor, García Hurtado de Mendoza; with the new name of Villa de San Mateo de Osorno, in honor of his grandfather, Count of Osorno. It was destroyed again by the indigenous Huilliche people in October 1602.

On November 22, 1792, Tomás de Figueroa took possession of the ruins. Under the orders of Ambrosio O'Higgins, Osorno was again rebuilt by Juan Mackenna, and declared officially re-populated in 1796. O'Higgins, in turn, was awarded the title of Marquess of Osorno.

Osorno owes its legacy to fairly recent Chilean settlement, when the government subdued the region's indigenous Mapuche peoples in the mid-19th century and opened the land to Chilean and European immigration soon to follow. Large percentage of locals in Osorno are descendants of Spanish (the livestock grazing industry owes its foundation to the Basques) and other European immigrants.[citation needed]

Around 1850, the government of Chile began inviting German settlers to the colony to promote growth in the region; the settlers found Osorno's climate and geography to be very similar to their own. With their help, Osorno was made the home of the National Cattle ranch of Chile, boosting the regional economy significantly. Present-day Osorno has preserved 19th century architecture and urban layout, represented by six picturesque houses which have been designated national monuments.[3]

Osorno has a long history of rivalry with Valdivia, and in a 2006 referendum, the Osorno Province rejected its proposed incorporation into the new Los Ríos Region, of which Valdivia is now the capital.

The Chilean government encouraged German immigration in 1848, a time of revolution in Germany. Before that Bernhard Eunom Philippi recruited nine working families to emigrate from Hesse to Chile.

The origin of the German immigrants in Chile began with the Law of Selective Immigration of 1845. The objective of this law was to bring people of a medium social/high cultural level to colonize the southern regions of Chile; these were between Valdivia and Puerto Montt. Some report[citation needed] that 20,000 immigrated as a result. According to another source, no more than 5,600 out of about 11,000 German emigrants to Chile between 1846 and 1914 settled in Southern Chile.[4] The process was administered by Vicente Pérez Rosales by mandate of the then-president Manuel Montt. The German immigrants revived the domestic economy and they changed the southern zones. An example of this constructive spirit was stated by the leader of the first colonists Carlos Anwandter, who proclaimed to all the colonists:

For ten years after the Revolutions of 1848 in the German states, immigrants came from Germany. They established themselves principally in the Llanquihue in the towns of Frutillar, Puerto Octay, Puerto Varas, Osorno and Puerto Montt. 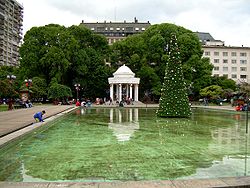 Osorno sits in sight of Volcán Osorno, an active but minor volcano. The city's most prominent geographical feature is the Rahue River that runs north-south through its center. A smaller stream breaks off as well, running east before turning south and giving the city some natural boundaries. Located near the river front on the east side is the city's heart, the Plaza de Armas, a large, one-block park with fountains, benches, and tree-lined avenues. On the park's east side is La Catedral of Saint Matthew, one of the city's major landmarks, notable for its modern architecture. The cathedral serves as mother church of the Catholic Diocese of Osorno. Along the south side is Juan Mackenna Avenue, the city's major city centre street. Other points of interest are the main campus of the Universidad de Los Lagos and the Osorno Rodeo Stadium. The recently opened casino Plaza Sol de los Lagos is a new popular attraction for tourists and locals alike.

Another celebration is the Feria Ganadera Sago Fisur (Sago-Fisur Cattle Fair) held annually in early November, hosted by the largest ranch in the area highlights the current state of agricultural activity. Fireworks displays are held every year around the city on September 18, the Chilean Independence Day, commemorating independence from Spain.

Osorno is also a gateway for many tourist attractions. Puyehue National Park is a major attraction, with pristine lakes, forests, and game preserves. The volcanic area provides natural hot springs, now the site of the Aguas Calientes spa. Puyehue Hot Springs is adjacent to the park.

Los Lagos Region was named for the many lakes in the area, many of which have tourist-friendly yet isolated beaches; closest to Osorno are Puyehue and Rupanco.[5] Antillanca ski resort, less than a hundred kilometers away, is one of the highest-quality resorts in Chile. Ecotourism is also encouraged by the indigenous Huilliche communities, who inhabit the Pacific coastal zone. Much of the funds brought in by tourism is being used to protect native plant and tree species, most notably the Alerce, a threatened cyprus. The thick forests open onto beautiful beaches and bays, such as Maicolpué, Bahía Mansa and Pucatrihue.

Football and basketball are popular sports in the city. Osorno fields a football team, Provincial Osorno, in the third level national football league. Provincial Osorno plays home games at the Estadio Ruben Marcos Peralta, which has a seating capacity of 10,800.

Osorno's official basketball team in the National Basketball League is named Osorno Basquetbol. Their home games are held at the Gimnasio María Gallardo, which has a seating capacity of almost 4,500.

Chilean rodeo is popular in Osorno, as it is in most of the center-south zone of the country. Osorno's rodeo stadium, the Medialuna de Osorno, is considered one of the bests in the country, and was the qualifying arena for the southern region of the national rodeo in 2006.

Boxing is also one of the city's pastimes; Osorno produced Chile's boxing representative at the 1972 Summer Olympics, Martín Vargas. Additionally, the mountainous terrain surrounding Osorno is ideal for skiing and snowboarding, sports popularized by the large tide of German immigrants. It is the closest city to the Antillanca ski resort, only 98 km away. 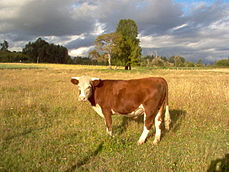 Osorno is an important agricultural center, and agriculture makes up the bulk of the Osorno province's economic activity. Wheat and oats grow abundantly, but the land is also well suited to the breeding of Chilean horses and cattle Some of the finest Chilean beef products originate in the Osorno ranches.

Osorno's proximity to the Cardenal Antonio Samoré Pass that makes it a key point in the national economy. The mountain pass connects Osorno to the Argentine city of Bariloche, and is one of primary arteries that ties the two countries' southern regions together. The pass is particularly important due to the fact that it crosses the Andes mountains at very low altitude, allowing it to remain open when other passes are blocked by snow.

Despite all this, Osorno has seen some economic stagnation in the past several decades. Agriculture alone has not allowed it to keep pace with the booming, rapidly-industralizing Chilean economy; lacking both industrial and information sectors. In an effort to combat this, the city has forged international business ties with certain Dutch companies, since it was discovered that the local climate is ideal for the growing of tulips. Likewise, Osorno has recently entered the international meat market. Besides offering high-quality beef, the isolated region is also completely free of the recent rash of cattle plagues, such as Mad Cow and foot-and-mouth disease, guaranteeing the safety of Chilean meats.

Osorno is now faced with a unique opportunity: the arable land is ideally suited for the growing of beets, soy, and corn, crops gaining in popularity with the recent development of biocombustibles, fuels derived from crops, such as corn-derived ethanol. It is hoped that the Chilean government's announcement that it will not apply the same steep taxes to agricultural fuels as it does to petroleum products, as well as the increasing demand for more environment-friendly fuels, may mean that Osorno will again become a major economic hub.

As Chile continues to develop as one of South America's economic leaders and one of the most stable states in the area, tourism is on the rise, as visitors flock to Osorno's natural beauty and old-European atmosphere. 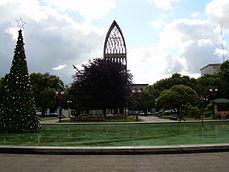 The city is served by Canal Bajo Carlos Hott Siebert Airport, which offers 2-hour flights to Santiago. Buses also depart for the capital daily. The Cardenal Antonio Samoré Pass also marks the city as a major gateway to and from Argentina.

As a commune, Osorno is a third-level administrative division of Chile administered by a municipal council, headed by an alcalde who is directly elected every four years. The 2008-2012 alcalde is aime Alberto Bertin Valenzuela.[1]

Within the electoral divisions of Chile, Osorno is represented in the Chamber of Deputies by Mr. Javier Hernández (UDI) and Mr. Sergio Ojeda (PDC) as part of the 55th electoral district, (together with San Juan de la Costa and San Pablo). The commune is represented in the Senate by Camilo Escalona Medina (PS) and Carlos Kuschel Silva (RN) as part of the 17th senatorial constituency (Los Lagos Region).