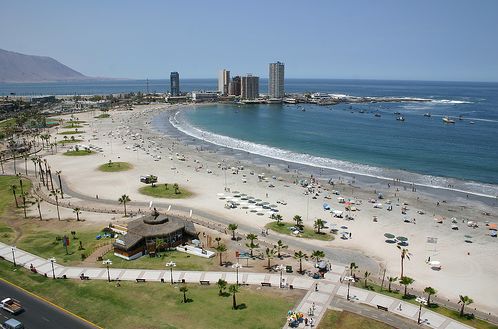 Iquique has one of the largest duty-free commercial port centers (or "Zona Franca") of and has been traditionally called "Zofri". There are around 2.4 km² of warehouses, banking branches, and restaurants.

The city's name comes from the word "Ique-ique", which translates to "laziness", but can also mean "sleep" or "bed."

Although the city was founded in the sixteenth century, there is evidence of habitation in the area by the Chango people as early as 7000 BC. During colonial times, Iquique was part of the as much of was at the time, and remained part of Peruvian territory until the end of the 19th century. Iquique's early development was due in large part to the discovery of mineral riches, particularly the presence of large deposits of (Chilean saltpeter, locally called "salitre") in the (then part of ). Some of the greatest Peruvian heroes were neighbors in Iquique, namely (who was elected Mayor in 1876), , a rich saltpeter entrepreneur; , later President of Peru (who after being overthrown in 1914 came to Iquique - then already under Chilean rule - to live out his last years), and , three times president of Peru, who was born in and died in the Desert of Tiviliche, , who lived in Iquique during his mandate as Governor of Tarapaca in 1825.

Territorial disputes between Bolivia and Chile triggered the in 1879. The outcome of the war gave Chile this portion of the Peruvian territory. Over the years there was substantial emigration from other parts of Chile to this area which was called the "Norte Grande". In subsequent years the further exportation of Chilean saltpeter (mainly to an countries) significantly helped in the development of the city, attracting foreigners and rapidly expanding housing projects.

In December 1907, the city was marred by the when the , under the command of Gen. , opened fire on thousands of saltpeter miners, and their wives and children, who assembled inside the Santa María School. The workers had marched into town to protest their working conditions and wages. Somewhere between 500 and 2,000 people were killed. The folk group recorded an album in remembrance of the event () in 1970. In December 2007 a series of cultural and ceremonial activities have been planned, culminating in the week between 14 to , to commemorate the centenary year of the massacre.

In July 1835, , during his voyage on the "Beagle", traveled to Iquique and described it as a town "very much in want of everyday necessities, such as water and firewood." These necessities had to be brought in from a considerable distances. Darwin also visited the saltpeter works.

In 1868 and again in 1877, the former vian city was devastated by s. On there was yet another earthquake, with a magnitude of 7.9 on the Richter Scale.

The was fought in the harbor of Iquique on , , now commemorated as , an annual public holiday in Chile.

The most recent accident involving a spacecraft RTG was the failure of the Russian Mars 96 probe launch on . The two RTGs onboard carried in total 200 g of plutonium and are assumed to have survived reentry (as they were designed to do). They are thought to now lie somewhere in a northeast-southwest running oval 320 km long by 80 km wide which is centred 32 km east of Iquique, Chile.