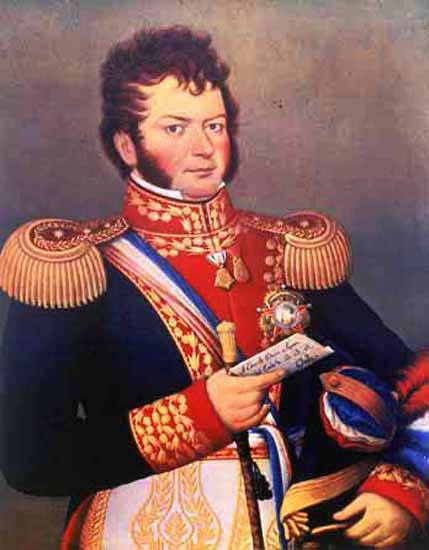 Bernardo O'Higgins Riquelme (, &ndash; , ), n independence leader, was one of the commanders &ndash; together with &ndash; of the military forces that freed from Spanish rule in the . Although he was the second Supreme Director of Chile (1817&ndash;23), O'Higgins was the first holder of this title to head a fully independent Chilean state.

As noted in his certificate of , he was the illegitimate son of , a Spanish officer born in in , who became governor of Chile and later of . His mother was Isabel Riquelme y Meza, a prominent lady of a noble family in . O'Higgins spent his early years with his mother's family in Central-south Chile. He had a distant relationship with his father, who supported him financially and was concerned with his education, but the two never met in person. Spanish government officials in America were forbidden to marry locals. [Crow, John A.; The Epic of Latin America (Fourth Edition); University of California Press, 1992; Page 166. Here he discusses that Viceroys and their subordinates could not contract marriage.]

As Ambrosio O'Higgins became Viceroy of Peru, at fifteen Bernardo was sent to a Catholic school in to complete his studies. [CathEncy|wstitle=Ambrose Bernard O'Higgins] There, Bernardo became acquainted with American-independentist ideas: he knew n and joined the Masonic .

Role in the Chilean Independence and Government

In 1810, he joined the nationalist rebels fighting for independence from . In 1814, his Chilean rebels were defeated by the Spanish and retreated into the . In 1817, O'Higgins went back on the offensive with the aid of Argentine General . On , , he led a charge that won the . He became the first leader of independent Chile, and was granted dictatorial powers as Supreme Director on , . On , , Chile was proclaimed an independent republic.

His six-year rule saw the founding of the Military Academy and the approval of the new (and current) Chilean flag. However, his more radical and liberal s, (such as the establishment of and abolition of s) were resisted by the powerful conservative large-land owners. During his government, he founded the cities of La Unión and Vicuña. From his later in , he promoted the Chilean expansion southward, concluding in the foundation of in 1845. Also, his government was involved in the killing of enemy independentist leaders , his brothers Juan José and Luis in , and Carreras' friend and guerrilla leader Manuel Rodríguez. He was deposed by a conservative coup on , .

During his government, he also assisted José de San Martín to organize the Expedition and an Army and Navy to support the Independence of Peru. He also organized the and the first , under the command of Lord Cochrane and .

After his deposition, O'Higgins spent the rest of his life in exile, and died in Lima, in 1842.

After his death, his remains were repatriated to Chile in 1869; moved in 1979 from the Military School to a place of honor in the Altar de la Patria's in front of the government palace; and then back again temporarily to the Military School, in 2004, for a year, during transformation of the "Altar de la Patria" into the new (Citizens' Square). The Chilean village of was named in his honor. The main thoroughfare of the Chilean , Santiago, is Avenida Libertador General Bernardo O'Higgins.

There is a bust of O'Higgins in Richmond, south-west London in O'Higgins Square, named after him. Each year the borough's Mayor is joined by members of the Chilean Embassy for a ceremony and a is placed. A was erected in his honor at Clarence House in Richmond, where he lived while studying in London. There is also a plaque in his honor in in and in the Walkway in , , and a sculpture near Central Railway Station in Plaza Iberoamericana, near 58 Chalmers St , .

A plaque has also been erected in , Spain, in the Plaza de Candalaria, where he resided for four years.

Chile's Highest award for a foreign citizen is named in Honour of O'Higgins.