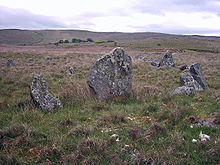 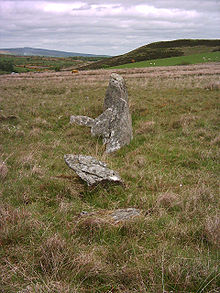 Corick (from Irish: Comhrac meaning "confluence"[1]) is a megalithic site in the civil parish of Ballynascreen, in Magherafelt District Council, County Londonderry, Northern Ireland.[2] It includes a stone circle and a stone row. The Corick stone circles and alignments are located 2 km north east of Ballybriest court-tomb, 400 metres south of Corick clachan, near a stream. There are some 5 circles (one with a large standing-stone in the middle) and 3 stone-rows.[3] The stone alignments and circle are Scheduled Historic Monuments in the townland of Corick, in Magherafelt District Council area, at grid reference: Area of H780 896.[4]

In 1940 the site was described as consisting of 3 stone circles with alignments and a possible grave structure to the northwest. The site is no longer so clear and survives as a complex of at least 4 alignments. Three are very well defined, consisting of stones ranging from 0.3 to 1.6m high. Within one alignment are two very large stones which may be the remains of a tomb. Five alignments are oriented almost exactly north-south and the sixth, a well-preserved line, runs WSW-ENE and contains some of the large stones on the site. To NNW are the remains of a stone circle of which only 6 stones on the west side survive and with a large central stone.[2]

Although it is often believed the stone monuments were intentially aligned to serve a greater purpose, the crudeness of the stones means that they could not have been used as advanced astronomical calculators. Their positioning therefore is more likely symbolic rather than functional.