Draperstown (locally [ˈdrɛpərzˈtəun] or [ˈdriːpərzˈtəun][2]) is a village in the Sperrin Mountains of County Londonderry, Northern Ireland. It had a population of 1,638 people in the 2001 Census.

Draperstown was founded in 1798 and received its name in 1818 after the London Drapers' Company. Before this, the nearby town of Moneymore was sometimes called Draperstown. It is commonly called by locals Ballynascreen or Ballinascreen, the former being the civil parish spelling of the name, and the latter the Roman Catholic parish spelling. It is also known in Irish as either Baile na Scríne or Baile na Croise.[3][4]

Historically it is a union of two settlements. In Elizabethan times the crossroads that was later to become Draperstown heralded a toll gate and a duckpond adjoining an earthen fort. At the onset of the Plantation of Ulster the escheated land was distributed among the Established Church and the twelve London Livery Companies that were to form the new county of Londonderry. The Ballinascreen area was divided between the Drapers' and the Skinners' companies, and the crossroads formed the boundary between the two. The area west of the crossroads which included Straw, Sixtowns and Moneyneena was part of the Skinner's portion. East of the crossroads belonged to the Drapers. The area was largely forgotten by the two companies until the turn of the nineteenth century, the land and properties being leased out to others. 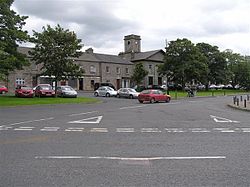 The present town was founded in 1798 by Laughlin McNamee, who had a public house in Moneyneena, 3.5 km north west of the crossroads. When he realised that his business was going to suffer when the local fair was to be moved, he transferred his premises to the crossroads and built a number of houses alongside. Laughlin is buried in the front graveyard of the Catholic parish church, St Columba's, Straw (1.5 km SW of Draperstown). The new settlement was referred to by different names: the Cross of Ballinascreen, Moyheeland, and Burboy.

In 1812 the Drapers' Company had a resurgent interest in their portion, and built a new planned town in the western reaches of their land, overlooking and adjoining the crossroads. This they referred to as Draperstown, and this was the name subsequently recognized by the Post Office. The properties within the area in the present day which still belong to the original Drapers Company[citation needed] include the 'Fair Hill' area and the 'Gate House' on the Magherafelt(Gortnaskey)Road.

In the 1840s the town received notoriety as a place with a severe, albeit unusual drug problem. This has been described in detail by Dr Nagle who made a report on licit and illicit drugs on behalf of the Consumer Union in the mid nineteenth century where he stated: "About 1840 a Catholic priest, Father Matthew, led a great temperance crusade through England, Scotland, and Ireland. It was one of the most successful that ever occurred; thousands took the pledge. One of them was an alcoholic physician named Kelly who practiced in Draperstown, in the north of Ireland. Aghast at the pleasure he had given up, but not wishing to break his pledge, [Dr. Kelly] cast about for a substitute. He had prescribed ether by mouth on occasion and knew of its pleasant effects. After a few personal experiments he imparted the knowledge to his friends and patients who had also taken the pledge. Ether sniffing became endemic in Draperstown. Fifteen years later, when the British government placed a stiff tax on alcoholic beverages and when the constabulary clamped down on home distilled Irish whiskey, Kelly's discovery was recalled and exploited to the hilt. Ether, which was not subject to the tax, was distilled in London and shipped to Draperstown and other places in Northern Ireland by the ton. Ether was preferred in some ways, and especially among the poor, to the now-expensive whiskey. The drink was quick and cheap, and could be achieved several times a day without hangover. If arrested for drunkenness, the offender would be sober by the time the police station was reached."

A surgeon visiting Draperstown in 1878 remarked that: "The main street smelled like his surgery, where ether was used as an anesthetic. Old ether topers, he added, could finish off a three-ounce wineglassful at a single swig, without even water for a chaser. Everyone who discussed this particular phenomenon admitted that there appeared to be less chronic damage than with alcohol. But hazards were also noted: chronic gastritis, deaths from overdosage, and fatal burns from smoking while drinking–– for ether is extremely flammable."

The following are local listed buildings or special conservation areas:

The famous Kentucky Idle Hour Stock Farm horse breeder Edward R. Bradley's Family originates from the Sixtowns area of Ballinascreen, five kilometres west of Draperstown. Hero of the American Civil War, Captain Charles McAnally originally from Sixtowns, emigrated to the United States and joined the Union Forces, the 69th Pennsylvania Volunteers, at the outset of the war. As well as taking part in the crucial action of Pickett's Charge at the Battle of Gettysburg, He was awarded the Medal of Honor after his exploits during the Battle of Spotsylvania. He is listed in the Roll of Honour that "In a hand-to-hand encounter with the enemy captured a flag, was wounded in the act, but continued on duty until he received a second wound." He survived the war and ended his days near Austin, Texas.

The annual Glasgowbury Festival is held near Draperstown. Local bands, as well as some more famous names appear. This year's event is due to be held on Saturday 23 July 2011. Sperrins Balloon Festival also is held in Draperstown every year, with hot air balloon enthusiasts gathering in Draperstown. Weekly live music gigs take place in The Cellar Bar.

Draperstown railway station opened on 20 July 1883, closed for passenger traffic on 1 October 1930 and finally closed altogether on 3 July 1950.[6] The Draperstown branch ran from Magherafelt with an intermediate station at Desertmartin.