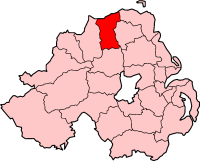 Portstewart (Irish: "Port na Binne Uaine" or "Port Stíobhaird") is a in , and had a population of 7,803 people in the 2001 Census. It is a , seen by residents as a grander version of neighbouring . Of the two towns, Portstewart is decidedly quieter with more sedate attractions. Its harbour and scenic coastal paths form an Atlantic promenade leading to 2 miles of golden strand (). Portstewart is probably best-known for this sandy , popular with surfers and its magnificent golf course.

Portstewart was a popular holiday destination for Victorian middle-class families. Its long, crescent-shaped seafront promenade is sheltered by rocky headlands. It is a reasonably prosperous town. Most of the town is contained in the Strand electoral ward and this is one of the most affluent areas in Northern Ireland. In a of the 582 electoral wards in Northern Ireland the Strand Ward in the town was ranked 570, where 1 (most deprived) and 582 (least deprived). According to [http://www.ninis.nisra.gov.uk/ NI Neighbourhood Information Service]

House prices in Portstewart are among the highest in the province. The North Coast region (/ area) has the highest property prices in Northern Ireland, higher than those of affluent south . (according to the Quarterly House Price Index report produced in partnership with and the Northern Ireland Housing Executive - March 2006).

Portstewart is one of the most desirable places to live or own a holiday home in Northern Ireland. Due to its popularity for second home ownership there has been concern in recent years about the pace of development in the town. The number of second homes/apartments being purchased has led to rapid inflation of house prices and pricing locals out of the market.

The town has also houses many of the students from the nearby Coleraine Campus of the and has a vibrant social and cultural life.

Portstewart is one of the most integrated towns in Northern Ireland with the religious demographics similar to the population of Northern Ireland as a whole. It is often praised for the excellent community relations within the town. Dominican College, a Catholic grammar school has a high proportion of Protestant students and staff.

Portstewart takes its name from a Lieutenant Stewart who in 1734 obtained a lease of land from the . The town is relatively new. As recently as the mid 18th century it was little more than a fishing village, although it has been inhabited since the era. Portstewart developed to a modest size seaside resort in the mid 19th century under the influence of a local landlord, John Cromie. Its development and character was influenced greatly by the sabbatarian sensitivities of the Cromies and the consequent resistance to a railway connection in the mid 19th century. The scale of development for the next century was more modest than that of neighbouring Portrush which rapidly expanded (particularly in the late Victorian era) with the mass tourism market. Despite a tram connection being provided from Portstewart to Cromore to link with the railway, the town developed with a more genteel character. With the ascent of the car as the predominant means of travel through the 20th century, Portstewart developed a wider role as a popular holiday and recreational destination, along with a significant dormitory function due to its proximity to Coleraine as well as being a local service centre.

From the 1950s until into the 1980s the town's main development thrust was as a residential area, with the steady construction of new dwellings in the suburbs mainly for owner occupation. Unlike Portrush where there was a rapid expansion of static caravan parks, Portstewart continued to avoid the effects of mass tourism.

Over the past 15 years however, there is a widespread perception that the character of the town has changed through the rapid growth of the student population and the accelerating expansion of second home ownership. There is considerable local opinion that the permanent community is at risk from being overwhelmed by this tide of seasonal residents, who have only a limited role in the commercial and social life of the community.

*Portstewart has a Dominican (an imposing Gothic mansion) with the attached Dominican College sitting on the edge of a cliff which dominates the western end of the . The eastern end of the promenade has a small harbour which has recently undergone refurbishment.
*Just west of the town stretches , a clean two mile long blue flag beach, protected by the National Trust. Portstewart Strand has been the most popular attraction of Portstewart to holiday-makers for generations. 's well is to be found at the head of the strand, which was used in the 19th century and early 20th century for horse racing. The beach finishes at the Barmouth of the overlooking .
*Beneath the convent is a cliff path which stretches along the coast from the Promenade to Portstewart Strand. From here it is a popular walk to the Barmouth, where the Bann flows out into the . The cliff path has panoramic views across the Strand and Downhill with in the background. The Barmouth is a sanctuary for waders, wildfowl and nesting birds. Beyond the Barmouth lies Castlerock, , Benone Strand and the .
*To the east of Portstewart is a popular walking/cycling path along the coast to Portrush, leading to the (a UNESCO ), and the (the oldest licensed distillery in the world).
*The North Antrim Coast Path which forms part of the Ulster Way starts at Portstewart Strand and continues for 40 miles along the coast to Murlough Bay
*Portstewart is home to the famous Morelli's ice-cream parlour.

* is the local club.
*The town is home to three s (under one club - ), made lively by the forceful Atlantic wind. Portstewart has one of the few 54-hole complexes in Europe. The championship links Strand course is set amidst imposing sand dunes with panoramic views across the Atlantic mouth of to the peninsula beyond. A claim is often made that Portstewart strand course has the best opening hole in Irish Golf - indeed some say in the world [http://www.greatnortherntravelandtours.co.uk/northatlantic.html] , [http://www.northandwestcoastlinks.com/golf_club.aspx?name=Portstewart] and has been described as "an absolute stunner" by experts [http://www.top100golfcourses.co.uk/htmlsite/productdetails.asp?id=76] . Portstewart golf club is ranked 95th in the 'Top 100 golf courses of the British Isles' [http://www.top100golfcourses.co.uk/htmlsite/productdetails.asp?id=76] . Portstewart Golf Club does however live in the shadow of its better-known neighbour, . It has been stated that "if it weren't for the fact that the highly acclaimed, Royal Portrush Golf Club is only a couple of miles down the road from Portstewart, the latter would be much better known as one of the best courses in all Ireland and would be vying with its neighbour for the accolades that are normally reserved exclusively for Portrush and Royal County Down". [http://www.pgatour.com/story/6443435]
*Every May the motorcycle race passes through the town, with the starting grid and pit area located on the coastal road between Portrush and Portstewart. The circuit between the towns Portrush, Portstewart and Coleraine is considered among the fastest in the world, with speeds topping 200mph. It is one of the last such classic races held in Europe. Drawing crowds of around 130,000, it is the largest outdoor sporting event in Ireland. [http://www.irishnews.com/jobs/cvpdfs/11052006/A35P4.pdf]
*Portstewart also hosts matches in the .
*
*Portstewart Eagles Baseball team

*The songwriter was inspired by one of the town's sunsets when he wrote "". Jimmy Kennedy was born in Omagh but grew up in Portstewart. The town now has an annual Red Sails Festival each July, which in 2004, as with most years, culminated with a firework display out over the bay. Over 70,000 people crammed the seafront to watch. In the summer of 2005 the Portstewart Community Association launched a website to help promote the festival. It gives detailed information on the week long festival and all of the activities available.
* was vocalist with and the lead female vocalist on a number one single in 1990, "A Little Time". She grew up in Portstewart and attended the Dominican College.
* (McKeown), the successful comedian is also a former resident of Portstewart having attended Dominican College before finding fame with his unique comic style first in Australia and then internationally.
*, the former Northern Ireland footballer used to own a hotel in the town.
*, acknowledged as one of the world's leading boxing writers.
*, politician lives in Portstewart
*, BBC Newsline newsreader attended Dominican College and lives in Portstewart
*, guitarist. McCullough began his career with The Skyrockets, followed by Gene and The Gents, (both were Showbands from Enniskillen). He was then part of Paul McCartney's group Wings, before moving onto other groups. He is now resident back in Portstewart, but still tours. He is the only Northern Irishman to have played at , having backed .
* Mrs New Zealand 2006 went to Dominican College in Portstewart from 1977 to 1984.
* born author of short stories lists his hometown as Portstewart.

Portstewart is the main residence of students from the nearby campus in .