A chambered cairn is a burial monument, usually constructed during the Neolithic, consisting of a cairn of stones inside which a sizeable (usually stone) chamber was constructed. Some chambered cairns are also passage-graves.

Typically, the chamber is larger than a cist, and will contain a larger number of interments, which are either excarnated bones or inhumations (cremations). Most were situated near a settlement, and served as that community's "graveyard". 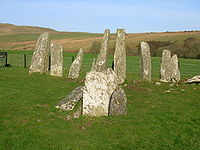 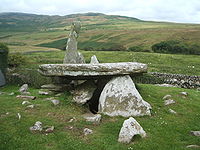 Scotland has a particularly large number of chambered cairns, many of radically different type. Because of the lack of other remains (the only other significant remains we have are hut circles and field systems), they are perhaps the most important clue we have to what civilisation in Scotland was like in the Neolithic. Here is a short description of each type as the classification currently stands:

The Clyde-Carlingford type are to be found in northern and western Ireland and in mostly southwestern Scotland. Lacking a significant passage, they are a form of gallery grave. The very basic burial chamber is normally located at one end of the cairn, while a roofless, semi-circular forecourt at the entrance provided access from the outside (although the entrance was usually blocked), and gives this type of chambered cairn its alternate name of court tomb or court cairn. They are generally considered to be the earliest in Scotland, dating perhaps to as early as 4000 BCE, and probably spread to Scotland from Ireland.

Sharing some features with the Clyde-Carlingford group is the Hebridean group. As their name suggests they are normally found in the Hebrides, and have a crude polygonal chamber and a very short passage to one end of the cairn. 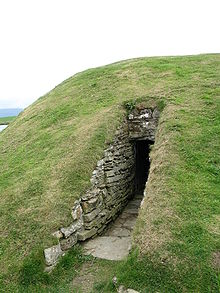 The Orkney-Cromarty group is by far the largest and most diverse. It has been subdivided into Yarrows, Camster and Cromarty subtypes but the differences are extremely subtle. In general, they all have dividing slabs at either side of a rectangular chamber, separating it into compartments. The number of these compartments ranges from 4 in the earliest examples to over 24 in an extreme example on Orkney. The actual shape of the cairn varies from simple circular designs to elaborate 'forecourts' protruding from each end, creating what look like small Amphitheatres. It is likely that these are the result of cultural influences from mainland Europe, as they are similar to designs found in France and Spain.

The Bookan type is thought to be the earliest to be found on Orkney. Because of Orkney's archaeological richness, Bookan type tombs are very hard to find. They are extremely unusual, some being double-deckered! They all seem to have features which suggest some early stage in the development of Maeshowe type tombs.

The Maeshowe group, named after the famous monument on Orkney, is among the most elaborate. Like their counterparts on Shetland, they are unlike anything else in Scotland, so it is possible these were the result of local development, or influences from Scandinavia. They consist of a central chamber from which lead small compartments, into which burials would be placed.

A final category is the Shetland group, of which little is known. On plan, they do look similar to the Maeshowe group although the whole chamber is cross-shaped and there are no small compartments.

There are 18 SAM listed: