Versus is a sports-oriented cable television channel in the United States. It was previously known as Outdoor Life Network and was launched in July 1, 1995, focusing on fishing, hunting, and other outdoor sports. By September 2006, the network had become increasingly focused on mainstream sports — resulting in its re-launch as Versus.

Comcast, the owner of Versus, acquired a majority stake in NBC Universal in 2011. As a result of the merger, the operations of all of Comcast's national sports networks were folded into the NBC Sports division. As a further result of its new synergy, Versus will be re-launched as the NBC Sports Network on January 2, 2012.[1]

The channel originally started as the Outdoor Life Network (or OLN) on July 1, 1995; the name was licensed from Outdoor Life magazine. For almost a decade, the channel consisted of hunting and fishing shows. In 2004, they capitalized on the popularity of Lance Armstrong during the Tour de France, showing virtually nothing but Tour-related coverage for over three weeks, including additional Tour-related reality programming focusing on Armstrong and his fans.[citation needed]

In July 2005, OLN revamped its image, focusing on more extreme outdoor sporting events. In conjunction with the revamp, their logo and American website were completely redesigned as well. As part of the revamp, they acquired the rights from NBC Universal of the X Games-type Gravity Games as well as the rebroadcast rights to the CBS reality series Survivor, and began airing the series from the beginning of season one on July 24, 2005.

In August 2005, they acquired the cable television rights to air the National Hockey League. [2] The NHL's deal with OLN parent Comcast also gave company part ownership of a U.S. version of NHL Network, and distribution on all of its cable systems.

Early in 2006, they broadcast some games during the Arena Football League's 20th Anniversary season. They televised a weekly regular-season game for 11 weeks as well as a wild card playoff game.[3] However, the agreement was not renewed and was later picked up by ESPN.[4]

As a result of its increased focus on mainstream sports programming, the network was officially re-launched as Versus on September 25, 2006 (however, its Canadian counterpart maintained its original format, and still uses the OLN name to this date). The renamed Versus covered boxing with a series of fight programs promoted by Bob Arum's Top Rank group.[5] They also began televising Chuck Norris's World Combat League, a kickboxing promotion where fights are contested in a unique round ring without ropes.[6] Versus entered into a partnership with World Extreme Cagefighting (WEC) to bring mixed martial arts events to the channel, with the first being broadcast live on June 3, 2007. They aired all the WEC events, except for WEC 48, which aired on pay-per-view, with live preliminary fights being aired on Spike TV.[7]

They also added a variety of sports events as part of the rebranding, including men's and women's college basketball, high school basketball,[8][9] a weekly "game of the week" for the National Lacrosse League,[10] darts competitions, the Major Indoor Soccer League, and the USA Sevens, one of the nine tournaments (then eight) that make up the IRB Sevens World Series, the top annual circuit in the sevens version of rugby union. Versus is also home to many Professional Bull Riders (PBR) and bull riding events.

They secured coverage for the 2007 America's Cup, which was also a staple on ESPN and ESPN2 for years. They began to show qualifying regattas in late 2005. They also aired the Louis Vuitton Cup for challengers in 2007, and the America's Cup match between the Louis Vuitton winner and current champions, won by Alinghi of Switzerland in Valencia, Spain. In 2006, they picked up American broadcast rights (in conjunction with The Tennis Channel) of Davis Cup events.

In June 2008, they moved its operations from Stamford, Connecticut, to Comcast's headquarters in Philadelphia, Pennsylvania.[16]

On August 7, 2008, they announced a 10-year deal with the Indy Racing League to broadcast at least 13 IndyCar Series events a year in HD, beginning in 2009. [17] Bob Jenkins, Jon Beekhuis, and Robbie Buhl are on the broadcast team along with Jack Arute, Robbie Floyd, and Lindy Thackston in the pits. Terry Linger is the producer.[18] The channel would also broadcast various motorsports series on its Lucas Oil Motorsports Hour program such as USAC and Lucas Oil Late Model Dirt Series.

The channel aired the 96th Grey Cup, the championship game of the Canadian Football League in 2008.

2009 also saw Versus begin airing games from the United Football League. The first season Championship aired on November 27, 2009. The UFL would return to Versus for a second season in 2010.

On April 5, 2010, Versus debuted The Daily Line. The show consisted of a four-person panel (host Liam McHugh, handicapper Rob DeAngelis, comedian Reese Waters, and Jenn Sterger) which discussed, often with heavy satire, sports-related topics that were popular that day.[19] After seven months on the air, they cancelled The Daily Line as of November 4, 2010 as a result of low ratings.[20]

The Ultimate Fighting Championship would air two live events on the channel due to the new contract agreement with UFC sister promotion World Extreme Cagefighting. The first edition of UFC on Versus aired on March 21, 2010 headlined by Brandon Vera vs. Jon Jones in the Light Heavyweight division. The second event aired on August 1 with Jon Jones facing Vladimir Matyushenko. Also as part of the agreement with the UFC, several UFC Countdown shows would air. There was a countdown show the week of a PPV, usually lasting for one hour, and covering 2-3 of the biggest fights on the card.

On August 3, 2010, they began airing Greatest MLB Rivalries, a one-hour show that focused on some of the biggest rivalries in baseball. Five episodes were filmed with a new show every Tuesday. The American League vs. National League, Dodgers vs. Giants, Yankees vs. Red Sox, Mets vs. Phillies and Cubs vs. Cardinals were the rivalries featured.

In February 2011, Comcast acquired a majority share in NBC Universal, and merged its content operations into the company. As part of the acquisition, Versus (and Comcast's other sports channels) began to be integrated into the NBC Sports division. Coinciding with the merger, President Jamie Davis was replaced by Comcast Sports Group President Jon Litner. Litner will now oversee the channel, in addition to his other duties following the Comcast takeover.[22]

With World Extreme Cagefighting's merger into the Ultimate Fighting Championship, there will be no further WEC events aired on Versus, although they will air four additional UFC events in 2011.

The network also announced that they would be airing National Lacrosse League games, starting with the 2011 All-Star Game and culminating with the Champion's Cup final. The network will air nine games total in the 2011 season.

In April 2011, NBC Sports and Versus announced they had reached a ten year extension to the television contract with the National Hockey League worth nearly 2 billion dollars over the life of the contract. As part of the announcement, the former chairman of NBC Sports, Dick Ebersol announced that Versus would be re-named "within 90 days", in order to reflect the synergy of the two networks after the Universal-Comcast merger.[23] However, no announcement of a new name would come until August 1, 2011.[1]

On June 6, 2011, it was revealed that NBCUniversal would be extending their rights to the Olympic Games through 2020, outbidding competing bids by Fox Sports and ESPN in a $4.38 billion contract. It is expected that Versus will participate in NBC's overall coverage beginning in 2012.[1][24][25] 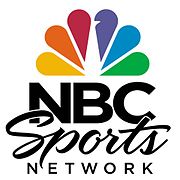 On August 1, 2011, Comcast officially announced that Versus would be re-launched as the NBC Sports Network on January 2, 2012. Personnel from NBC Sports will be shared between the two channels, and the network's telecasts will be produced in a similar style to those aired by NBC. This is the reverse of the arrangement between ABC Sports and ESPN, both of which are controlled by Disney. The re-launch will coincide with multiple major events to be aired on NBC at the beginning of the year (such as the NHL Winter Classic, the NFL post-season, and Super Bowl XLVI), which will be used to promote the network. Comcast also reported that Versus's primetime viewership had doubled since the merger with NBC.[1]

In October 2005, they elected not to provide its NHL coverage to a number of distributors, including EchoStar (Dish Network) and Cablevision, which both refused Comcast's request to place Versus on a much higher-penetration package. During this time, they blacked out NHL coverage on these systems, replacing them with other programming. It was believed that the reason behind these blackouts had to do with a penalty fee that Comcast would have had to pay the NHL if they did not significantly increase their distribution.[citation needed]

While Cablevision eventually came to an agreement making OLN/Versus available to any customer with digital cable, EchoStar retaliated by pulling OLN from its service; it was Dish Network's stance that few of its customers would be willing to have the channel if it meant raising rates. On April 24, 2006, the same date that OLN announced the late-September name change to Versus, Dish Network and OLN reached a long term agreement to restore the channel.

On August 18, 2009, DirecTV informed its customers that it may drop the channel after August 31, 2009 if a new carriage agreement wasn't made with the network's owners Comcast.[28]

DirecTV dropped the channel at midnight on September 1, replacing it with the message "Versus is no longer available on this channel. Comcast, which owns Versus, has forced us to take down the channel because we will not submit to their unfair and outrageous demands. For more information go to directv.com/versus."

On March 15, 2010 an agreement was reached between the sides and Versus returned to DirecTV's lineup. The channel was returned to its original package on the service, Choice Xtra.[29]

A 1080i high definition simulcast was launched in January 2007. Initially, they shared an HD feed with its sister network Golf Channel, marketed as Versus/Golf HD, airing Golf Channel programming during the daytime hours, and Versus programming at night. The shared channel were replaced by individual HD feeds for both networks in December 2008.[30]

Prior to the launch of the channel's HD feed, some Versus programming in the HD format was seen on the defunct INHD channels.

When Versus becomes the NBC Sports Network, the channel is expected to take on the 16:9 widescreen letterbox format for its standard definition feed just as Fox Sports, CNN, and other cable networks have done.

They have also aired several sports movies, like Rocky III, The Big Lebowski and Miracle, as well as reruns of Survivor.[31] and original programming shows like Sports Soup, TapOut, The Contender, Holy @$%*!, Sports Unfiltered with Dennis Miller, and Fanarchy.

Versus, continuing a tradition started when the channel was still known as the Outdoor Life Network, devotes most of its daytime and weekend programming to programs of interest to outdoorsmen, with most of its shows pertaining to hunting and fishing; Bill Dance, Mike Iaconelli, Babe Winkelman, and Tred Barta are among the numerous hosts seen during the outdoor programming.