Universal Parks & Resorts markets the park as a "one-of-its-kind theme park in Asia" and promises that the park will be the only one of its kind in Southeast Asia for the next 30 years.[3]

Construction of Resorts World Sentosa, and Universal Studios Singapore began on 19 April 2008. After almost two years of construction, the park opened on 18 March 2010.

Universal Studios Singapore was opened for sneak peek week in view of the Chinese New Year Celebrations, from 5 pm to 9 pm every night between 14 to 21 February 2010.[4] Though visitors had to pay SGD$10 to enter the park despite rides not operating, tickets for the week were sold out in 2 days. On 5 March 2010, it was announced that the park will open its doors on 8:28 am (UTC+8) 18 March 2010, for a soft-opening phase. From 13 March 2010, the team members of Resorts World Sentosa and their families had a chance to visit the park before the public has a chance to do so.[5] The park had its soft opening period from 18 March 2010 to 26 October 2010.[6]

The official grand opening of the park was held on 28 May 2011, along with the grand opening gala being held on 27 May 2011 evening. It was a star-studded event with Asian superstars Jet Li, Maggie Cheung, Vicki Zhao, and former "American Idol" judge Paula Abdul making an appearance at the gala event, along with some 1,600 guests.[7] 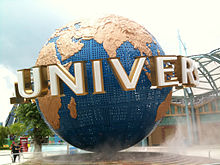 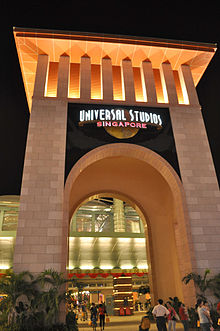 Universal Studios Singapore is 20 hectares (49 acres) in size, occupying the easternmost part of the 49-hectare (120-acre) Resorts World Sentosa. There are a total of 24 attractions, of which 18 are original or specially adapted for the park.[25] The park consists of seven uniquely themed zones which surround a lagoon. Each zone is based on a blockbuster movie or a television show, featuring their own unique attractions, character appearances, dining and shopping areas. The park features the world's tallest pair of dueling roller coasters that are based on the hit television series, Battlestar Galactica; a castle from the world of Shrek and Monster Rock, a live musical show featuring the infamous Universal Monsters. Universal Studios Singapore has over 30 restaurants and food carts, together with 20 unique retail stores and carts located around the park. Attractions premiering are marked "Premiere" and dining outlets that are certified Halal are marked with "Halal". 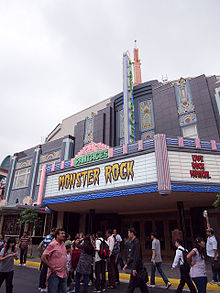 Hollywood is the main entrance area of the park. Its only attraction, a broadway-style theatre, is accompanied by several restaurants and a variety of flagship shops. Being a replica of the famous Hollywood Boulevard, this zone is flanked by dynamic architecture and palm trees. It also features a replica of the famous Hollywood Walk of Fame.[26] On every Friday and Saturday night, the lagoon of the park is the site of Lake Hollywood Spectacular – a special pyrotechnics show. Special character appearances include: Po from Kung Fu Panda, Frankenstein's Monster, Woody Woodpecker, Winnie Woodpecker, Marilyn Monroe, Charlie Chaplin, Beetlejuice and Betty Boop. 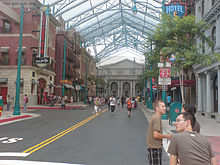 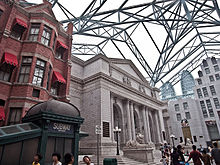 New York is based on the original New York City, during the era of post-modernization. This zone features various icons commonly portrayed in movies including the trademark city skyline, neon lights, facades, sidewalks as well as the romantic atmosphere of the Big Apple. To top it off, this zone also have a replica of the famous New York Public Library with two lion statues at its entrance.[31] 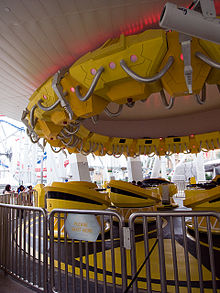 Sci-Fi City is an imagined metropolis of the future that contains many modern conveniences of life, but with little or no remnants of past inhabitants and cultures that are able to stand the course of time. It is the home of the world's tallest pair of dueling roller coasters, at a height of 42.7 metres (140 ft).[25][34] The pair of dueling roller coasters, Battlestar Galactica: Human vs. Cylon, are based on the hit television series, Battlestar Galactica. 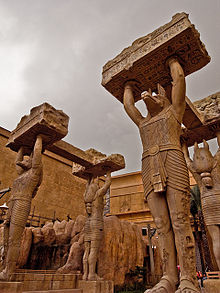 Ancient Egypt is based on the historical adaptation of Ancient Egypt during the 1930s Golden Age of Egyptian Exploration. It features obelisks and pyramids which are typical of Ancient Egypt. Also featured are Pharaohs' tombs which were commonly discovered during that era. Visitors take the role of a daring archaeologist who aims to unravel the riddles of the Sphinx in this sand-swept land. The area also relies on the depictions made in the popular film franchise, The Mummy, starring Brendan Fraser.[38] 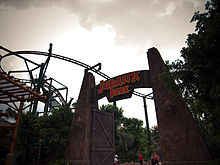 The Jurassic Park entrance with Canopy Flyer in the background. 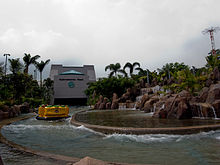 Far Far Away is inspired by DreamWorks Animation's hit Shrek franchise which depicted how the fairy-tale characters lived in daily life. The zone consists of many recognizable locations from the film series such as Shrek's swamp house as well as Far Far Away's glamorous Romeo Drive which contains the nightspots of the town such as Hook's Knight Club. The highlight of the zone is the 40-metre tall Far Far Away Castle which is a world's first.[48] The castle hosts attractions such as Shrek 4-D and Donkey Live featuring the voice talents of Mike Myers, Eddie Murphy, Antonio Banderas and Cameron Diaz.[49] Special character appearances include: Shrek, Donkey,[50] Puss In Boots and Princess Fiona.[50] 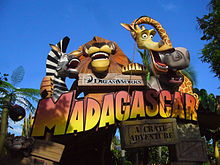 The entrance to Madagascar: A Crate Adventure.

Universal Studios Singapore VIP Tour offers merchandise discounts, complimentary dining, golden photo opportunities with celebrity lookalikes as well as VIP access on rides, attractions and performances. Each tour accommodates between two and twelve guests per Guide. Each tour lasts approximately five hours around Universal Studios Singapore. The tour covers eight or more attractions. Universal Express access would be made available to all attractions before or after the guide tour.