NBC Weather Plus was a 24-hour, commercially sponsored, weather-oriented broadcast/cable television network jointly owned by NBC Universal and the local affiliates of the NBC network. It debuted on November 15, 2004 and shut down on December 31, 2008.[1] The network's headquarters was initially located at the MSNBC World Headquarters in Secaucus, New Jersey, and then CNBC Global Headquarters in Englewood Cliffs, New Jersey after MSNBC's move to 30 Rockefeller Plaza with the broadcast side of NBC News, where Weather Plus staff also appeared within the new MSNBC studios to deliver forecasts and interact with NBC News personalities in person. The service was broadcast on digital subchannels of certain NBC affiliates in the United States, and was available on digital cable systems in Standard Definition (SD) format.

The service effectively shut down operations on December 31, 2008. The remaining affiliates received a computer-updated loop of satellite/radar images, current weather conditions and temperatures, and daily forecasts for major regions of the country. As of December 31, 2008, some stations opting to carry a locally derived weather information operate under the local name, NBC Plus. This option allows using the local equipment that had been used to insert content with the now defunct national feed of NBC Weather Plus. 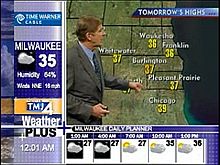 Local version of NBC Weather Plus from Milwaukee's WTMJ, showing an ad in the top-left corner, local branding above the Weather Plus logo, and time in the bottom-left.

Internet viewers who saw the national feed, including those in areas where the network's website did not supply their city's Weather Plus feed, instead saw a segment including daily forecasts for each region of the United States, along with satellite loops and Doppler radars of the Northeast, Southeast, Midwest, Northwest, and Southwest. The national feed of NBC Weather Plus was not carried on DirecTV, Dish Network, or C band satellite, which differed from the practices of those satellite providers with respect to The Weather Channel.

Music associated with the local-forecast segments came from commercial sources, including 615 Music, which composed the music package (mostly the tracks from Positive Pop Grooves, with the other tracks being DJ Gruv, Voccho, Sneez, and Pyraflex) used by NBC Weather Plus' weather radar forecasts post-2005.

WNBC in New York was the test station for NBC Weather Plus.

NBC Weather Plus did not air its programming entirely live, and it used a digital video jukebox system to shuffle certain segments of the weathercasts unless severe weather breaks. This system was especially true with the seasonal outlooks, weather news segments at :24 and :54 minutes past the hour, and with late night programming. If one watched NBC Weather Plus closely in any given day, one might have found the same weather news segment that originally aired in the morning repeated long into the night, the same weather information airing at 11:00 p.m. airing at 4:00 a.m., and the same seasonal outlook (severe weather, tropical weather, or winter weather) segment that originally aired in the morning repeating long into the late afternoon. In the latter case, this is problematic due to the fact that if severe weather of either category occurred (unless it is very significant), updated information may not have been available.

Appearance on other networks

The channel's staff also provided weather updates for fellow NBC Universal cable channels CNBC and MSNBC, and MSNBC aired 'sample' hours of the channel in holiday periods during the morning hours. In addition, Weather Plus was promoted during Football Night in America, and was used to provide gametime temperature and conditions for the later NBC Sunday Night Football game. Increasingly during times of significant national weather events (such as a major winter storm system), Weather Plus meteorologists have appeared live on NBC Nightly News to provide analysis. The Weather Channel now provides these services.

NBC Weather Plus used an "L-Bar" across the left side third and bottom third of the screen to continuously air local weather information, even during commercial breaks, national weather, and Weather Plus University.

The left side of the bar was reserved for sponsorship of Weather Plus programming on the top left (sponsors of NBC Weather Plus's programming was more often seen on local feeds), the middle left displayed the sky condition, temperature, wind speed/direction and humidity for each city and the bottom left was reserved for station identification (on local feeds, featuring the NBC affiliate's logo augmented above the Weather Plus portion of the logo) and current time was on the lower left, along with permanent text for station identification on some stations. (During Weather Plus University, the sponsorship tag was removed.)

The cycle for each city's weather information display was as follows:

However, the above did not hold true for the left side of the L-Bar on Sacramento NBC affiliate KCRA. Instead, the current conditions cycled continuously and the time was on the right-hand side in the lower-third.

The bottom of the bar to the right of the time and station ID displayed the forecast for the next 24 hours featuring sky condition, temperature and estimated precipitation, followed by the five day forecast showing sky condition and predicted high and low temperatures. Occasionally, the current conditions display showed the icons telling the sky condition with the icon displaying sun despite it being nighttime. This also occurs on The Weather Channel but usually only in the hour following sunset. Not all cities where the current conditions were displayed on the left side of the "L" bar featured that city's forecast and may instead have used the conditions of the closest reporting station to that community. Example: Dallas NBC affiliate KXAS' Weather Plus feed displayed the current conditions for Fort Worth Alliance Airport but showed the forecast for Dallas-Fort Worth.

The following list was the channel's programming wheel (until October 2008).[2] Note that some network segments had a different title at times due to a sponsor for the forecast such as State Farm Road Coverage, which replaced Coast To Coast Forecast.

During severe weather, stations could choose to drop the national segments for news simulcasts or a constant radar display, with NBC able to show a local station's coverage nationally during the Coast To Coast Forecast or the Plus Five Forecast, depending on what part of the programming cycle the network was.

A planned revamp of Weather Plus prior to the shutdown announcement. (from KOMU-TV)

Current logo for NBC Plus.

NBC announced on October 7, 2008 that Weather Plus would be phased out by December 31, after the NBC affiliates expressed a desire to shut the service down.[3] Though NBC cited its purchase of The Weather Channel as a factor in the shutdown,[4] it has been stated that the closure would have happened even if the acquisition had not happened.[3]

On-camera personality segments ended on October 24, 2008. From then on until the network's sign-off date, only a loop of various national maps with music, local maps by the affiliates, and Weather Plus University were shown. With this, the remaining OCM staff of the channel were referred to on other NBC News programs as only "NBC meteorologists", then eventually as being staff from the Weather Channel.

Prior to the shutdown announcement, the staff at NBC Weather Plus was planning a revamp of their L-bar. At least one former Weather Plus affiliate, WKYC-TV in Cleveland used this revamp since the closure of Weather Plus as part of their localized version, until abandoning the Weather Plus format for looping local radar.[5]

Until 2011, several stations ran a barebones variant of WeatherPlus, which was finally replaced with (city name) Nonstop channels.

+ This affiliate converted to the AccuWeather Channel operations when WeatherPlus shut down.