Leopold I, Prince of Anhalt-Dessau

Leopold I, Prince of Anhalt-Dessau

Leopold I, Prince of Anhalt-Dessau (3 July 1676 – 7 April 1747) was a German prince of the House of Ascania and ruler of the principality of Anhalt-Dessau. He was also a Generalfeldmarschall in the Prussian army. Nicknamed "the Old Dessauer" (German: der alte Dessauer), he possessed only modest abilities as a field commander, but was a talented drillmaster who modernized the Prussian infantry.

Leopold was the ninth of ten children (and the younger of only two sons) of John George II, Prince of Anhalt-Dessau, by his wife Henriette Catherine, daughter of Frederick Henry, Prince of Orange. An older brother died well before Leopold was born.

Leopold was born in Dessau. From his earliest youth he devoted himself to military pursuits, for which he educated himself both physically and mentally. He became colonel of a Prussian regiment in 1693, and in the same year inherited his own principality; for the remainder of his long life, he performed the duties of a sovereign prince and a Prussian officer simultaneously.

Leopold's first campaign was that of 1695 in the Netherlands, in which he was present at the Siege of Namur. He remained in the field to the end of the war of 1697, the affairs of the principality being managed chiefly by his mother, the Dowager Princess Henriette Katharina (in fact, she had been acting as regent since the death of his father until he reached adulthood the same year, but continued in charge of the government of Anhalt-Dessau for some time after he attained his majority).

As a young prince, Leopold fell in love with Anna Louise Föse (Fösen according to some sources) (Dessau, 22 March 1677 – Dessau, 5 February 1745), an apothecary's daughter in Dessau. His mother, the Dowager Princess, tried to break up the relationship, sending her son abroad for an extended travel, but to no avail. One year after officially becoming an adult in 1697, he married his beloved Anna Louise in Dessau, on 8 September 1698. They had ten children:

On 29 December 1701 Anna Louise was created an Imperial Princess (German: Reichsfürstin) by the Emperor Leopold I, who also declared that their children would be considered princes and princesses of Anhalt and would enjoy all the rights that other princes of the Empire enjoy. King Frederick I of Prussia extended his personal guarantee on 12 March 1702, promising to recognize the rights of the issue of this marriage. The agnates of all the branches of Anhalt also gave their agreement a few days later, on 21 March.[1]

Leopold and Anna Louise enjoyed a long and happy marriage, and the princess acquired an influence over her husband that she never ceased to exert on behalf of his subjects. After the death of Leopold's mother she performed the duties of regent when he was absent on campaign. Often, too, she accompanied him into the field.

Leopold's career as a soldier in important commands began with the outbreak of the War of the Spanish Succession in 1701. He had many improvements made in the Prussian army, notably the introduction of the iron ramrod about 1700, and he now took the field at the head of a Prussian corps on the Rhine, serving at the sieges of Kaiserswerth and Venlo in 1702. In the following year, having obtained the rank of lieutenant-general, Leopold took part in the siege of Bonnand fought as part of the Battle of Hochstadt, in which the Austrians and their Prussian allies were defeated by the French under Marshal Claude-Louis-Hector de Villars on September 20, 1703. In the campaign of 1704 the Prussian contingent served first under Louis William, Margrave of Baden-Baden, then Prince Eugene of Savoy, and fought at Blenheim.

In 1705 Leopold was sent with a Prussian corps to join Prince Eugene in Italy, and on August 6 fought at the Battle of Cassano. In the Battle of Turin, he was the first to enter the hostile entrenchments (September 7, 1706). He served in one more campaign in Italy, and then served under Eugene to join Marlborough in the Netherlands, being present in 1709 at the siege of Tournai and the Battle of Malplaquet.

In 1710 Leopold succeeded to the command of the entire Prussian contingent at the French front, and in 1712, he was made a field marshal at the particular request of the crown prince of Prussia, Frederick William, who had served with him as a volunteer. Shortly before this he had executed a coup de main on the castle of Mors, which had been held by the Dutch in defiance of the claims of the king of Prussia to its possession. The operation was effected with absolute precision and the castle was seized without a shot being fired. In the earlier part of the reign of Frederick William I, the prince of Dessau was one of the most influential members of the Prussian governing circle.

Although Prussia was hostile to Sweden, the Prussians were reluctant to participate in the Great Northern War. Only after the Russians destroyed most of the Swedish army did Prussia enter the war in 1715. Leopold accompanied the king to the front, commanded an army of 40,000 men, and defeated the much smaller force of Charles XII of Sweden in a hard-fought battle on the island of Rügen on November 16 in alliance with the Danish army of Stralsund. In peacetime, and especially after a court quarrel and duel with General Friedrich Wilhelm von Grumbkow in 1725, he devoted himself to the training of the Prussian army. 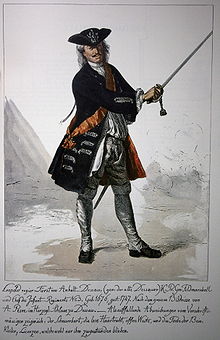 Leopold I, Prince of Anhalt-Dessau (b. Dessau, 3 July 1676 - d. Dessau, 7 April 1747) was a German prince member of the House of Ascania and ruler of the Principality of Anhalt-Dessau, also he was a Generalfeldmarschall in the Prussian Army. Nicknamed "the Old Dessauer" (German: der alte Dessauer), was a minor field commander but a talented drill master who modernized the Prussian infantry.

Although the reputation gained by the Prussian army in the wars fought between 1675 to 1715 was a good one, it was still considered one of the minor military forces in Europe by 1740, when the War of the Austrian Succession broke out. Leopold's outstanding achievement just before this time was his training of the Prussian infantry. The "Old Dessauer" was one of the sternest disciplinarians in an age of stern discipline, and the technical training of the infantry under his hand made the Prussian infantry into a formidable fighting force whose effectiveness had not yet been demonstrated. Leopold was essentially an infantry soldier; in his time, artillery usually did not decide battles, but he nonetheless chose to neglect the cavalry service, with results that manifested themselves at the Battle of Mollwitz in 1741. Frederick II of Prussia led the cavalry himself at the battles of Hohenfriedberg in 1745 and Leuthen in 1757, but had it not been for the supporting infantry trained by Leopold he would never have had the opportunity to do so.

Thus Leopold, with the steadfast support of King Frederick William of Prussia, himself one of the greatest drillmasters of Europe, turned to good account the twenty years following the peace with Sweden. During this time two incidents in his career deserve special mention: firstly, his intervention in the case of the crown prince Frederick, who was condemned to death for desertion, but due to his efforts reinstated in the Prussian army; and secondly, his successful role in the War of the Polish Succession on the Rhine, where he served under his old chief Eugene of Savoy and held the office of Field Marshal of the Empire.

Service under Frederick the Great

With the death of Frederick William in 1740, Frederick the Great succeeded to the Prussian throne, and a few months later initiated the invasion and conquest of Silesia, the first action in the long Silesian Wars and the test of Leopold's lifelong efforts to improve the effectiveness of the Prussian army. The prince himself was not often employed in the king's own army, though his sons held high commands under Frederick. The king, indeed, found Leopold somewhat difficult to manage, and the prince spent most of the campaigning years up to 1745 in command of an army of observation on the Saxon frontier.

Early in that year his wife died. Leopold was now over seventy, but his last campaign was destined to be the most successful of his long career. A combined effort of the Austrians and Saxons to retrieve the disasters of the summer by a winter campaign towards Berlin itself led to a hurried concentration of the Prussians. Frederick from Silesia checked the Austrian main army and hastened towards Dresden. But before Frederick arrived, Leopold had decided the war by means of his overwhelming victory over Saxons at Kesselsdorf on December 14, 1745. It was his habit to pray before battle, for he was a devout Lutheran. On this last field his words were, "O Lord God, let me not be disgraced in my old days. Or if Thou wilt not help me, do not help these scoundrels, but leave us to try it ourselves." Leopold's career ended with this great victory. He retired from active service, and the short remainder of his life was spent at Dessau.