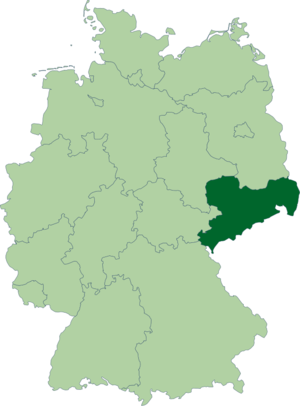 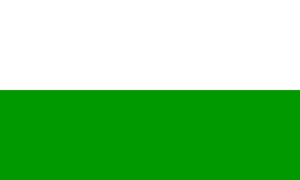 The Free State of Saxony ( _de. Freistaat Sachsen IPA| [ˈfʁaɪʃtaːt ˈzaksən] ; _hs. Swobodny Stat Sakska) is the easternmost federal state of . Located in the country's southeast, it is the tenth-largest in area and sixth-largest in population among Germany's sixteen states, and has a land area of 18,413 km² and a population of 4.3 million.

Saxony has a long history as a , an electorate of the (the ), and eventually as a kingdom (the ). Its monarchy was overthrown in 1918 and a republican form of government was established under its current name subsequent to Germany's defeat in . Abolished during communist rule, it was re-established on 3 October 1990 during the re-unification of East and .

During the early the term "Saxony" referred to the region occupied by today's states of and northern . The had migrated there from the area of present-day between 250 and 500; "see History below".

The term "Saxon" does not always correlate with Saxony; a Saxon is not necessarily an inhabitant of Saxony (e.g. , or ); "see ".

, the capital of Saxony and situated on the in eastern middle Germany, as measured and recorded in Klotzsche (altitude 227 m).]

Saxony is divided into three Direktionsbezirke — Chemnitz, Dresden, Leipzig — which are subdivided into 10 districts:

Furthermore there are three urban districts ( _de. Kreisfreie Städte / Stadtkreise), which don't belong to any district:

Saxony has the most vibrant economy among the former states. Its economy grew by 4.0% in 2006, making it the fastest growing region in Germany, which is among other things due to the establishment of a chip producing economy near Dresden. As a result of this the region was given the nickname "Silicon Saxony". Nonetheless, unemployment remains high and investment is scarce. Because of these factors, Saxony, along with the rest of the east (excluding ) qualifies as an "Objective 1" development region within the , and thus can receive investment subsidies of up to 30% until 2013. In the interests of encouraging growth, the state government has attempted to develop tourism in the region, notably in the lake district of Lausitz ["", 27 August 2005] . The publishing industry and porcelain factories are well known but in total not so important contributors to Saxony's economy.

Prehistoric Saxony was the site of some of the largest of the ancient Central European monumental temples, dating from the 5th millennium BC. Notable archaeological sites have been discovered in and the villages of and near . "For the origins of the Saxon tribes see ".

Foundation of the first Saxon state

The first mediæval Duchy of Saxony was a late "Carolingian " and emerged about AD 700 covering the greater part of Northern . It covered the area of the modern German states of , , , . In the 10th century the dukes of Saxony were at the same time kings (or emperors) of the ( or Saxon Dynasty). At that time, a Saxon noble family of s received extensive fiefs in Saxony, and the Emperor eventually gave them the title of . After the extinction of the male line of Billungs, the duchy was given to , who then also became Emperor for a short time.

In 1137 Saxony was passed to the dynasty, who were descendants (1) of Wulfhild Billung, eldest daughter of the last Billung duke, and (2) of the daughter of Lothar of Supplinburg. It reached its peak under Duke , and after his death it began to decline (Henry had declined to participate in the later Italian wars of his liege lord, Emperor , and those expeditions to Italy ended in disasters. The furious emperor retaliated and sent his troops to end Duke Henry's dominion). In 1180 large portions west of the Weser were ceded to the Bishops of Cologne, while some central parts between the Weser and the Elbe remained to the Welfs, later forming the Duchy of ). The remaining Eastern lands, together with the title of Duke of Saxony, were passed to an dynasty (who descended from Eilika Billung, Wulfhild's younger sister) and divided in 1260 into the two small states of and . Saxony-Lauenburg was later renamed Lauenburg and was no longer part of Saxony or its history. Saxe-Wittenberg was confirmed to have inherited the "main" ducal title of the Saxons and as such was recognized as an Elector of the Empire in 14th century.

Foundation of the second Saxon state

Saxony-Wittenberg, in present , became subject to the of and ruled by the Wettin dynasty in 1423. A new powerful state was established, occupying large portions of present Saxony, Thuringia and Saxony-Anhalt. Although the center of this state was far southeast of the former Saxony, it came to be referred to as Upper Saxony and then simply Saxony, while the former Saxon territories were now known as Lower Saxony.

In 1485, Saxony was split as a collateral line of the Wettin princes received what later became and founded several small states there; "see ". The remaining Saxon state became even more powerful, becoming known in the 18th century for its cultural achievements, although it was politically inferior to and , which pressed Saxony from either side.

Saxony in the 19th and 20th centuries

Following the abolition of the in 1806, the became a kingdom by decree of the French Emperor Napoleon, and Elector Frederick Augustus III became King Frederick Augustus I. Frederick Augustus made the mistake of remaining loyal for too long to Napoleon, and he was taken prisoner and his territories declared forfeit by the allies in 1813, with the intention of their being annexed by . Ultimately, the opposition of , , and the resulted in Frederick Augustus being restored to his throne at the , but Saxony was forced to cede the northern part of the kingdom to Prussia. These lands became the Prussian , which is today incorporated in Saxony-Anhalt. What was left of the was roughly identical with the present federal state.

During the 1848–49 constitutionalist revolutions in Germany, Saxony became a hotbed for revolutionaries, with anarchists such as and democrats including and taking part in the in 1849.

After 1918 Saxony was a state in the and was the scene of 's overthrow of the KPD/SPD led government in 1923. The state was abandoned in all but name during the Nazi era, then reconstituted under Soviet occupation. It was officially dissolved in 1952, and divided into three smaller "Bezirke" based on , and Karl-Marx-Stadt, but reestablished within slightly altered borders in 1990 upon . Saxony also includes a small part of the former German province of west of the town of which remained German after the Second World War and which for obvious reasons of unavailability as a separate state was thus into Saxony. This part had been part of Silesia only after 1815 and belonged to Upper Lusatia and before 1623 and thereafter to Saxony between 1623 and 1815.

Therefore, the current territory of Saxony includes the part of the former Prussian that was located to the west of the 1945 but excludes all territory or part of Saxony east of the same line, which like the majority of Silesia was incorporated into post-war Poland.

Upper Sorbian (a Slavic language) is still actively spoken in the parts of that are occupied by the minority. The Germans in Upper Lusatia speak also distinct dialects of their own (Lusatian dialects).

Apart from and perhaps international tourism is not well developed in Saxony, but some regions and cities are national, and potentially international touristic targets. Some attractive regions are the ones shared with , including the , Ore Mountains, , and . In Germany Saxony offers an above-average number of very well preserved historic little towns, for example , Freiberg, , , and others; thus tourism from within Germany is important for Saxony.

A heads the government of Saxony; "see for a full list".

The CDU lost its absolute majority and formed a grand coalition with the SPD. This election also saw the nationalist NPD enter a Landtag for the first time.

By November 2006, the NPD only held 8 seats after a series of internal disputes saw 4 members leave the party or be expelled.