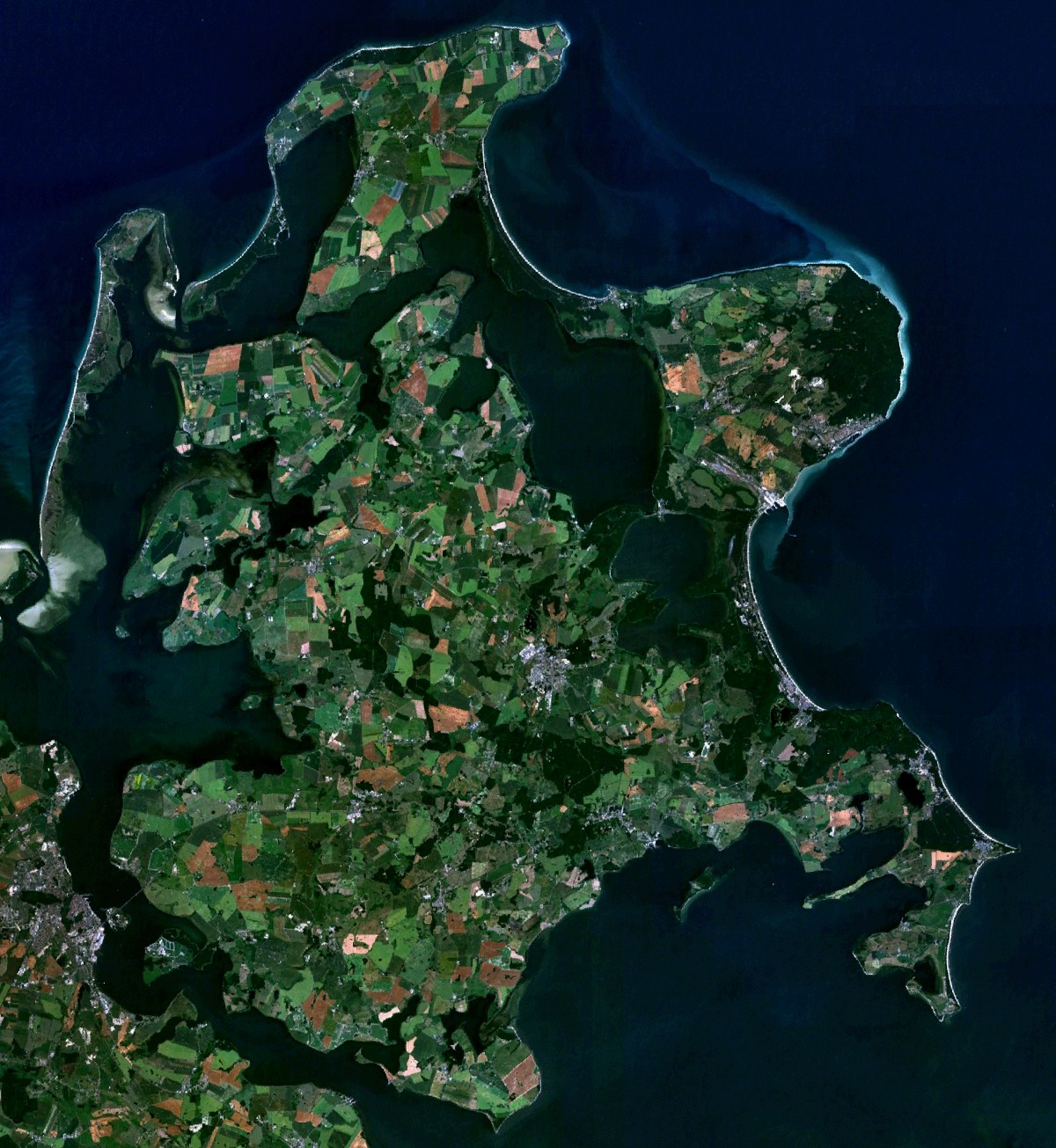 Rügen (IPA2|ˈʁyːgən) or Rugia is 's largest . It is located in the off the coast of . Rügen makes up the vast part of the Rügen District, which also includes the neighboring islands and , as well as several small islands. Rügen is located in one of the most popular holiday and recreation areas within Germany, comprising such seaside resorts as and and has more tourists per resident than any other location in Germany.

Rügen is located in northeastern Germany in the Baltic Sea and its shape is distinguished by many smaller peninsulas. The bridge, which connects the island by road and rail with the city of on the mainland, crosses over the . There are also ferry connections from Stralsund, and .

The climate is in the . The winters are not particularly cold with mean temperatures in January and February of 0.0 °C and the summers are cool with mean temperature in August 16.3 °C. There is average rainfall of 520-560 mm and approximately 1800-1870 hours of sunshine annually.

Two of Germany's national parks are on the Isle of Rügen: in the west (also including ) and , a smaller park including the famous chalk cliffs ("Königsstuhl"). There is also nature reserve, , consisting of the peninsulas in the southeast.

Rügen was first populated about 4000 BCE. The migrants were probably members of the , which exploited Rügen's deposits.

In the beginning of the first millennium, the island and the surrounding continental areas were settled by the Germanic , who might have come from or evolved from tribes and gave their name to the island. In the 7th century, West Slavic R(uj)ani settled Rügen, assimilating the Germanic population which had not migrated southward in the , thereby adopting their name ("Rugians --> "Rujanes). Many traces of their life can be found today. Rügen became a Slavic principality, stretching from the to the River, with the political center in the ancient town of "Charenza", and a religious center in the fortified temple of at , the northernmost point of Rügen. In 1168 the area was conquered by and became the Danish . The principality underwent Christianisation and German settlement in the course of the . The former monarchs became Danish princes of Rügen. In 1325, Rügen was inherited by the .

Rügen was a part of from 1648 to 1815; afterwards it became a part of the Prussian . In 1816 the first bathing resort was founded at . Later more resorts were established, and Rügen remained the most famous holiday resort of Germany until .

In 1936 the first bridge connecting Rügen (, recently with a second bridge, ) with the mainland was constructed, replacing the former ferry shuttles. The Nazis added a large resort: , planned by the organisation, which aimed to occupy people's free time. However, Prora was never completed.

Rügen was a major summer holiday destination in the . Rügen remained a holiday island after ; it has now surpassed as the most popular German island again.

In February 2006, dead s found on Rügen tested positive for (the subtype that is a threat). A house cat was found dead with the H5N1 strain, marking the first known case of H5N1 in s in the .

Rügen is one of the most requested holiday destinations in Germany. The island has many popular seaside resorts along the eastern coast, such as , as well as quieter locations in the west. Several of the holiday resorts are accessible via a historic employing steam locomotives, called . Tourists come both to enjoy the beaches and to explore the island's diverse landscape.

The most popular locations are , , and as well as .

The title given to the operation commanded by which saw the town of bombed during the was named after the island. An Operation during the same conflict was titled Bodden after the strait separating Rügen from the German mainland.