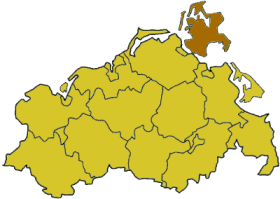 Rügen is a "Kreis" (district) in the northeastern part of , . It is bordered entirely by the Baltic Sea. The nearest district is and the district-free city .

The district covers the islands and , and several small islands like and Vilm. It is thus the only district of Germany which consists solely of islands.

The district of Rügen was created in by the Swedish administration of . At first it was named "Amt Bergen", in it was renamed to "Kreis Bergen".

With an administrative reform of Mecklenburg-Western Pomerania due in 2008 the district is scheduled to be merged into a larger district around the city Stralsund. However an initiative to keep the independence of the district of Rügen has already been started.