The Malayo-Polynesian languages are a subgroup of the Austronesian languages, with approximately 385.5 million speakers. These are widely dispersed throughout the island nations of Southeast Asia and the Pacific Ocean, with a smaller number in continental Asia. Malagasy is a geographic outlier, spoken in the island of Madagascar in the Indian Ocean.

Two morphological characteristics of the Malayo-Polynesian languages is a system of affixation and the reduplication (repetition of all or part of a word, such as wiki-wiki) to form new words. Like other Austronesian languages they have simple phonologies; thus a text has few but frequent sounds. The majority also lack consonant clusters (e.g., [str] or [mpt] in English). Most also have only a small set of vowels, five being a common number.

The Philippine languages are spoken by 90 million people and include Tagalog (Filipino), Cebuano, Ilokano, Hiligaynon, Bikolano, and Kapampangan, and Waray-Waray, each with at least three million speakers.

The most widely spoken Bornean language is Malagasy, with 20 million speakers.

The Sunda–Sulawesi languages (Nuclear languages outside Central–Eastern) are spoken by about 230 million people and include Malay (Indonesian and Malaysian), Sundanese, Javanese, Balinese, Acehnese, Chamorro of Guam, and Palauan.

The Malayo-Polynesian languages share several phonological and lexical innovations with the eastern Formosan languages, including the leveling of proto-Austronesian *t, *C to /t/ and *n, *N to /n/, a shift of *S to /h/, and vocabulary such as *lima "five" which are not attested in other Formosan languages. However, it does not align with any one branch. A 2008 analysis of the Austronesian Basic Vocabulary Database suggests the closest connection is with Paiwan, though it only assigns that connection a 75% confidence level.

Malayo-Polynesian consists of a large number of small local language clusters, with the one exception being Oceanic, the only large group which has been reconstructed and is indisputably valid. All other large groups within Malayo-Polynesian are disputed. The family has traditionally been divided into Western ("Hesperonesian"), Central, and Eastern branches. However, there is little support for these groups; Central MP languages are distinctive because they are typologically Melanesian due to substratum effects of the Papuan languages of eastern Indonesia, as similarly are the Eastern MP languages, while the Western branch is simply the branches which have not undergone such extensive contact-induced change.

Wouk and Ross (2002) proposed a Nuclear Malayo-Polynesian branch, based on a consistent simplification of the Austronesian alignment in the syntax of the proto-Malayo-Polynesian language, which is found throughout Indonesia apart from much of Borneo and the north of Sulawesi. Because Nuclear MP included some Western MP languages along with Central–Eastern MP, Wouk and Ross split Western MP into an "Inner" group on Sulawesi and the Sunda Islands, which together with Central–Eastern formed Nuclear Malayo-Polynesian, and an "Outer" group on Borneo and the Philippines. Both are remnant groups with negative definitions: Outer WMP (Borneo–Philippines) are those Malayo-Polynesian languages which are not Nuclear, while Inner WMP (Sunda–Sulawesi) are those Nuclear languages which are not Central–Eastern, which is itself a dubious group. Although Nuclear MP was defined using syntactic data, it finds moderate support from lexical data.

Thus the internal structure of Malayo-Polynesian suggested by the 2008 study is,

An expanded tree (based on a 2008 analysis of basic vocabulary using the Austronesian Basic Vocabulary Database) of the Malayo-Polynesian languages is given below. 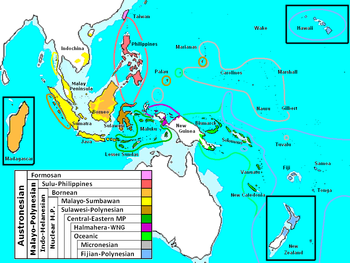 Families of Malayo-Polynesian languages, per the Austronesian Basic Vocabulary Database 2008.