National Treasure is a 2004 mystery adventure heist film from the Walt Disney Studios under Walt Disney Pictures. It was written by Jim Kouf, Ted Elliott, Terry Rossio, Cormac Wibberley, and Marianne Wibberley, produced by Jerry Bruckheimer, and directed by Jon Turteltaub. It is the first film in the National Treasure franchise and stars Nicolas Cage, Diane Kruger, Justin Bartha, Sean Bean, Jon Voight, Harvey Keitel, and Christopher Plummer. Cage plays Benjamin Gates, a historian and amateur cryptologist searching for a lost treasure, once protected by the Knights Templar and hidden by the Freemasons during the early years of the United States. A coded map on the back of the Declaration of Independence points to the location of the "national treasure", but Gates is not alone in his quest. Whoever can steal the Declaration and decode it first will find the greatest treasure in history.

Benjamin Gates (Nicolas Cage) is a historian and amateur cryptologist, and the youngest descendant of a long line of treasure hunters. Though Ben's father, Patrick Gates (Jon Voight), tries to discourage Ben from following in the family line, as he had spent over 20 years looking for it and never found a thing, young Ben (Hunter Gomez) is encouraged on by a clue from his grandfather (Christopher Plummer) that could lead to a fabled treasure hidden by the [[Founding Fathers of the United States] to protect his family name.

With an expedition funded and led by Ian Howe (Sean Bean), Ben and his friend and computer expert Riley Poole (Justin Bartha) track down a Colonial ship, the Charlotte, trapped in the ice in the Arctic. Aboard the ship they discover a meerschaum pipe engraved with a riddle that Ben connects to the Declaration of Independence. When Ian reveals he will go to any lengths to find this treasure including stealing the Declaration, Ben takes a stand against him. A fight ensues, during which spilled gunpowder is ignited. Ian escapes the ship, leaving it to explode before departing with his team. Ben and Riley are trapped inside but survive the explosion by hiding in a smugglers hold, and return to the United States determined to stop Ian.

When Ben tries to tell various authorities, including Agent Peter Sadusky (Harvey Keitel) of the FBI, and Dr. Abigail Chase (Diane Kruger) at the National Archives, they dismiss his claims, considering the Declaration impossible to steal. Ben and Riley concoct their own plan to steal the document during a gala event, and execute it just before Ian and his own team arrive. Abigail, suspicious of Ben's presence at the gala, becomes caught up with Ben and Riley as they escape from Ian and the authorities. Ben's identity is tracked to the theft, and they are forced to go to his father's home, much to Patrick's surprise and dismay. Ben and Abigail find an Ottendorf cipher on the back of the Declaration which, using the riddle from the pipe on the Charlotte, they connect to the Silence Dogood letters, written by Benjamin Franklin, at the Franklin Institute in Philadelphia. Decoding the message, they then head to Independence Hall where the trio find a pair of spectacles with multiple coloured lenses created by Franklin that reveal additional clues on the back on the Declaration. The group is caught by Ian, and even though they split up, Riley and Abigail and the Declaration are caught by Ian, while Agent Sadusky captures Ben, still with the glasses.

Ian, under the guise of a prisoner exchange, lures the FBI into a trap aboard the USS Intrepid, allowing them to grab Ben. Holding Riley, Abigail, and Patrick hostage, Ian forces Ben to use the bifocals and find the next clue, which leads the group to Trinity Church in New York City. Beneath the church they find an enormous shaft with an elevator system. At the bottom of the shaft, they find a room lit only by a lantern, which Ben and Patrick trick Ian into thinking that it refers to Paul Revere's ride, and indicates the treasure to be at the Old North Church in Boston. Ian and his men strand Ben, Riley, Abigail, and Patrick as they ascend to the surface, unaware that Ben has purposely tricked them. Ben uses the pipe from the Charlotte to open a secret door that reveals the vast treasure stash he has been searching for, as well as a route to the surface. 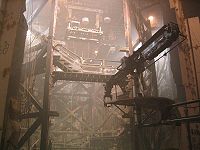 A film set for the underground chambers beneath Trinity Church

When the four ascend, they are met by Agent Sadusky, who reveals he is part of the Freemasons. Ben and Sadusky arrange a deal. With the safe return of the Declaration and identifying where Ian and his men can be found, Sadusky will clear all of their names; and the treasure will be distributed among museums throughout the world. Ian is captured by the FBI at the Old North Church and charged with kidnapping, attempted murder, and trespassing.

The film ends showing that Ben chose to accept from the US government only a 1% finder's fee for himself and his team. That is still enough to make him and his friends quite wealthy, given that Ben's estimated value of the find is US$10,000,000,000. In addition, Ben has begun a romantic relationship with Abigail.

The film received a mixed reaction from critics, some of whom lauded it as a fun, straightforward family adventure, while others ridiculed its numerous implausibilities and unbelievable plot twists. Roger Ebert gave National Treasure two stars (out of four), calling it "so silly that the Monty Python version could use the same screenplay, line for line."[2] Academic David Bordwell has expressed a liking for the film, placing it in the tradition of 1950s Disney children's adventure movies,[3] and using it as the basis for an essay on scene transitions in classical Hollywood cinema.[4]

The film currently holds a 44% approval rating on Rotten Tomatoes.[5]

A special collector's edition, two-disc DVD set of the movie was released on December 18, 2007.

All songs written and composed by Trevor Rabin.

Director Jon Turteltaub said that the filmmaking team will take its time on another National Treasure sequel,[7] but Disney has already registered the domains for NationalTreasure3DVD.com and NationalTreasure4DVD.com.[8] Though the second film ended with the question about page 47 of the President's book of secrets, Turteltaub responded in a press interview that the idea was not set in stone as the basis for National Treasure 3.[9]

IMDb reports that the film has a release date of 2014. 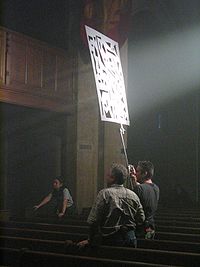