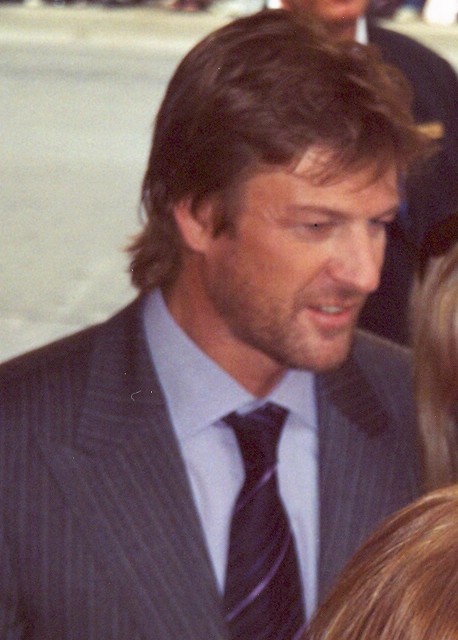 Shaun Mark Bean (born 17 April 1959) is an English and stage . Bean has also acted in a number of television productions as well as performing voice work for and television adverts. As an actor, he adopted the Celtic spelling "Sean" of his first name.

Bean has played a wide range of roles, from villains to heroes. His first successful role was his portrayal of Richard Sharpe in the television series "Sharpe".

Bean was born Shaun Mark Bean in the Handsworth district of , , , the son of Rita and Brian Bean.

As a child, Bean smashed a glass door due to an argument over scissors. It left a piece of glass embedded in his leg and left a large scar that briefly impeded his walking. This accident prevented him from pursuing his love of football professionally (although he would later carry out this dream in film). In 1975, Bean left Brook Comprehensive school with two O Levels in Art and English.

He graduated from RADA in 1983 having won the Silver Medal for his performance in "". [cite web|title=Biography|url=http://movies.aol.com/celebrity/sean-bean/4761/biography|publisher=AOL|accessdate=2006-09-14] He made his professional acting début in 1983 at the in Newbury, as in "". His early work involved a mixture of stage and screen work. His first national exposure came in an advert for non-alcoholic lager. [cite web|title=Barbican Ad|url=http://www.compleatseanbean.com/barbican.html|date=1999-12-26|accessdate=2006-09-24] Between 1986 and 1988 he toured the country with the doing productions of "Romeo and Juliet", "", and "". He appeared in his first film in 1986 when he played Ranuccio Thomasoni in 's film "Caravaggio" he then reunited with the director on "" in 1988 which also starred Lord Olivier.

During the late 1980s and early 1990s he became an established actor on British television.

However it was the character Richard Sharpe that he would become most associated with. Bean was the first choice to play Sharpe, but was unavailable; so the part went to . Two days into filming, however, McGann was injured in a football match, and, although the producers initially tried to work around his injury, eventually he was replaced with Bean, who was by then available. [ [http://www.tv.com/sharpe/sharpes-rifles/episode/197764/summary.html Sharpe: Sharpe's Rifles - TV.com ] ] The 14-episode "Sharpe" television series was based on 's novels about the and started with "Sharpe's Rifles". The series followed the fortunes of Richard Sharpe as he rose from Sergeant to Lieutenant Colonel by the time of the . It ran from 1993 to 1997 with 3 episodes produced each year. After several years of rumours, more episodes were produced, called "", which aired in April 2006, and "" which will air on ITV in the autumn of 2008 and will later be released on DVD. [cite web|title=Sharpe rumours|url=http://www.compleatseanbean.com/rumour-sharpe.html|accessdate=2006-09-16] Bean also played the role of Lord Richard Fenton in the TV Miniseries "Scarlett" based on the sequel to 's "".

His first notable Hollywood appearance was as an terrorist in the 1992 film adaptation of "Patriot Games".

This would be the first of several villains that he would portray.

In 1996 he finally achieved his childhood dream of playing for Sheffield United, albeit as Jimmy Muir in the film "When Saturday Comes". Although the film was not critically acclaimed, Sean Bean got credit for a good performance. [cite web|title=When Saturday Comes review|url=http://www.rottentomatoes.com/click/movie-1079137/reviews.php?critic=all&sortby=default&page=1&rid=814231|publisher=Rotten Tomatoes|accessdate=2006-09-14]

"The Lord of the Rings"

His most widely seen role was as in 's "The Lord of the Rings" trilogy, although his only major part was in the , only appearing briefly in the extended edition of ', and a flashback in '. Due to his fear of flying he was reluctant to take the helicopters out to remote mountain locations while filming for "". After a particularly rough ride, he vowed not to fly to a location again, and in one instance he chose to take a ski lift into the mountains and then hike the final few miles, all in full costume. [cite web|title=Flightplan interview|url=http://www.ugo.com/channels/filmtv/features/flightplan/bean.asp|accessdate=2006-09-14] As a reference to promos he made for the Sharpe series, Boromir cuts himself on 's sword and mutters, "Still sharp".Fact|date=April 2008

Bean has a of the Elvish word for "nine", a reference to his involvement in the Lord of the Rings and the fact that his character was one of the nine members of the Fellowship of the Ring. The other actors of "The Fellowship" (, , , , , , and ) got the same tattoo with the exception of whose stunt double got the tattoo instead.

Later roles gave more scope for his acting abilities. He became the repentant Grammaton cleric who gives in to his emotions in "Equilibrium" in 2002, a quirky alien cowboy in 2003's "The Big Empty", a sympathetic and cunning in the 2004 film "Troy", a villainous treasure hunter Ian Howe in "National Treasure", a villainous scientist in "The Island" (2005) and a sympathetic soul in "North Country" (2005) , in which Bean converted his naturally heavy accent into that of slang, and a dedicated father in "Silent Hill".

He was cameoed with a myriad of other Hollywood stars in 's "We Are All Made of Stars" in February 2002. [cite web|title=We are all made of Stars|url=http://www.full-of-beans.net/media/moby-video/index.htm|accessdate=2006-09-24] In the same year he returned to the stage in London performing in "" alongside .

Bean's high profile and recognisable voice has created a number of opportunities for doing voice over work, especially in the British advertising industry. [cite news|title=Voice that's earning a bean or two...|url=http://www.compleatseanbean.com/mainfeatures-61.html|publisher=Sheffield Today|format=reprint|date=2003-11-11|accessdate=2006-09-24] He has featured in television adverts for O2, and as well as for and the Sci-Fi Channel in the United States. He also does the voice over for the National Blood Service's television and radio campaign. He also voiced Martin Septim in the Role Playing video game "". [cite web|title=Bethesda Softworks Taps Hollywood Voice Talent|url=http://www.xbox365.com/news.cgi?id=GGuLdLLrGH09300940|publisher=Bethesda Softworks|accessdate=2006-09-24]

Bean has completed a one hour pilot, called "Faceless", for American television. He has also appeared in "Outlaw", an independent British production, and a remake of "The Hitcher" (released in January 2007), in which he put on an American accent again. He spent time in filming another independent film called "Far North".

Two films in production will reportedly star Bean. "" is an adaptation of "". [cite news|title=Bean and Swinton lead 'user-friendly' Macbeth
url=http://film.guardian.co.uk/news/story/0%2C%2C1808581%2C00.html?gusrc=rss|publisher=Guardian Newspapers Limited|date=|accessdate=2006-09-16] He had starred in a production of "" on the London stage with Samantha Bond as Lady Macbeth with much critical success. As of|2008, this film as well as "" are listed as being in pre-production according to the Internet Movie Data Base. The actor also has said that he would like to appear in "" (joking that he could be the milkman). [cite news|title=Bean eager for Coronation Street role|url=http://www.rte.ie/arts/2006/0127/coronationstreet.html|publisher=RTE|date=|accessdate=2006-09-16] He has also stated that he would like to do some wildlife presenting sometime in the future.

It has also recently been announced that Bean will be in the film "", set during the time of the first outbreak of the Bubonic Plague, Bean will star alongside and .

Often described as down-to-earth, Sean Bean has retained his Sheffield accent despite now living in London. He is also described as a sex symbol; he was voted the UK's second sexiest man in 2004. [cite news
title=Bloom is Britain's sexiest actor
url=http://www.dailymail.co.uk/pages/live/articles/showbiz/showbiznews.html?in_article_id=306533&in_page_id=1773
publisher=Daily Mail|date=
accessdate=2006-09-14] He admits he doesn't mind being considered by the ladies' as a "bit of rough". [cite news|title=The Andrew Duncan Interview|url=http://www.compleatseanbean.com/mainfeatures-77.html|format=reprint|publisher=Radio Times|date=|accessdate=2006-09-29]

He has developed a reputation as a loner, a label he considers unfair. In addition, he has been accused of being a ; this originated after his second wife claimed he watched too much football, spent too much time in the pub and left clothes about the house. [cite news|title=Sean Bean, the Sheffield welder turned actor, is careful not to sever his roots.|url=http://www.compleatseanbean.com/mainfeatures-59.html|publisher=The Times|format=reprint|date=|accessdate=2006-09-25]

Despite being professionally trained, Sean Bean adopts an instinctive style of acting.

He has been married four times and subsequently divorced three times.

Bean's first love was football and he has been a passionate Sheffield United supporter from a young age (he now has a tattoo on his left shoulder that reads 100% Blade). He was until December 2007 one of the directors of the club but finally decided to "go back to the terraces, where (he) truly belong(s)". [ [http://www.thestar.co.uk/sportheadlines/Sean-Bean-quits-Blades.3574247.jp The Star ] ] . He also wrote the foreword and helped promote a book of anecdotes called "Sheffield United: The Biography".

Sean Bean is yet to receive a major individual award in the film industry. However he did receive 3 separate awards as part of the ensemble cast in "",

In his home city of Sheffield he received an honorary doctorate from in 1997 and a second doctorate, a in English Literature from the in July 2007. [cite web|title=Sheffield University|url=http://www.shef.ac.uk/mediacentre/seanbean.html|accessdate=2007-07-20] He was also selected as one of the inaugural members of , the Sheffield equivalent of the .

Bean quoted "I did get a doctorate from Sheffield Hallam University about 11 or 12 years ago so now I'm a double doctor. But this was wonderful, especially from my home city." [cite web|title=Sheffield University|url=http://www.shef.ac.uk/mediacentre/seanbean.html|accessdate=2007-07-20] He is to have a plaque in his honour placed in front of . [cite web|title=Sheffield Legends|url=http://www.sheffield.gov.uk/index.asp?pgid=82868|accessdate=2006-09-14]