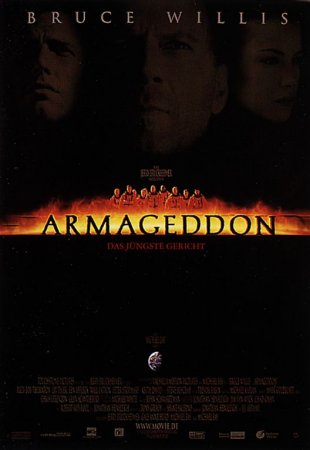 "Armageddon" is a 1998 disaster/sci-fi-action film about a group of blue-collar deep-core drillers who are sent by to deflect an asteroid on a collision course with . It was directed by , produced by and released on Disney's label. It stars , , and .

A was written by , based on the screenplay by , , and and the story by and .

The "" is struck by thousands of tiny meteoroids and explodes in space. Shortly after, an area from to the southeastern United States is bombarded by more meteors. Several meteors cause massive damage in New York City. NASA determines that these smaller objects were forced towards Earth by a much larger one the size of Texas, which will strike the Earth in 18 days causing total destruction of all life.

As high government officials and NASA specialists discuss the best course of action, they realize that launching nuclear missiles at the asteroid would be ineffective due to the size and velocity of the mass, but detonating a nuclear warhead inside the asteroid could effectively blow the asteroid in two halves which could bypass the Earth. NASA decides to recruit Harry Stamper, reputed to be the best deepcore driller in the world.

On his off shore oil rig, Stamper goes to AJ Frost's compartment and discovers his daughter, Grace, in bed with AJ. Grace admits she has secretly been dating AJ for several months. The well opens up, spewing oil all over the rig. Harry, who knew the relief valve on that particular well was broken, fires AJ over the blatant safety violation, much to Grace's chagrin.

As the crew cleans up, the Commander of the U.S. Pacific Air Force arrives to bring Harry back to the mainland. Since he won't leave without his daughter, Grace is loaded onto the helicopter and they arrive at the NASA Space Center in Houston. Dan Truman, head of NASA, explains to Harry about the incoming asteroid and NASA's plan to destroy it before it and that the government is keeping the asteroid and the mission a secret, fearing panic.

Harry agrees to take the job of destroying the asteroid, but only if he can take his own crew. Harry recruits his drilling partners AJ, Chick, Rockhound, Oscar, Noonan, Max, and Bear. The plan is to approach the asteroid from behind and land on it, drill in a spot along a fault line to 800 feet, plant a nuclear bomb in the shaft, and detonate it remotely after evacuation. The deadline for detonation is a distance from Earth called "zero barrier," which will allow the two halves of the asteroid to miss Earth if they split apart correctly. Harry's team prepares for the mission through rigorous space travel drills, modification of their equipment and pointed psychological tests to determine if they are able to work in space.

Shortly before the day of the launch, a large meteor wipes out and causes a , killing over 50,000 people. This disaster causes widespread panic around the world, and the press demands answers. The loss of secrecy forces the U.S. to reveal the impending disaster to the world, and in a broadcast speech on the day of the launch, the President reveals the full extent of the mission to the entire world.

The crew take off in two specially adapted shuttles, "Freedom" and "Independence". Harry, Chick, Max, and Rockhound, along with trained astronauts Sharp, Watts, and Gruber board Freedom. AJ, Oscar, Noonan, Bear, and astronauts Davis, Tucker, and Halsey board Independence. They dock with a dilapidated Russian space station manned by a single , Lev Andropov. An equipment failure during refueling causes the station to explode and Lev is barely able to evacuate with the "Independence".

The shuttles increase their speed to match the asteroid's velocity by flying at high speed around the moon. On their approach, debris from the asteroid's tail strikes the "Independence", causing massive damage. The "Independence" crashes onto the surface of the asteroid and only AJ, Lev, and Bear are left alive. They get into their drilling vehicle, called the Armadillo, and head out in search of Harry’s crew.

Harry’s crew lands safely on the asteroid despite damage to the "Freedom". Communications are out, leaving the crew with no way to contact Earth. They also determine that they have badly overshot their landing site and are sitting on an area comprised of iron, making it extremely difficult to drill. The crew start their project anyway and quickly figure out that the drilling will be nearly impossible.

Their troubles are compounded when the shuttle commander, Colonel Sharpe, informs NASA that they will not be able to complete the mission on time. The President, informed that possible loss of radio contact after seven minutes will result in loss of their ability to remote-detonate the nuclear warhead, decides that the bomb will be detonated early in the hopes that it will deflect the asteroid’s path enough to miss Earth. A fight ensues on the shuttle between Sharpe and Stamper. Stamper convinces the colonel that he can make the depth of 800 feet. Colonel Sharpe and his lieutenant defuse the bomb mere seconds before it is remotely detonated.

Meanwhile, Rockhound has a psychological breakdown from working in space. He causes a distraction while playing with a , nearly shooting the drilling team. While they attempt to bring him under control, the drilling vehicle hits a gas pocket, blasting it off the asteroid, taking Max with it. On Earth, the media report that the mission has failed. Panic ensues as the world braces for its impending doom. Not long after, a large meteor strikes and destroys most of .

As they wait out their fate, the crew realizes that AJ has survived the crash of the "Independence" and is arriving at the drilling site in the second Armadillo. They continue the operation and drill to 800 feet. Following a few more mishaps, including Gruber being impaled, they plant the nuke and prepare to evacuate. However, the remote detonation switch has been damaged and remote detonation from a safe distance is impossible.

The remaining members of Stamper’s crew draw straws to see who will stay behind and detonate the bomb. AJ draws the short straw. As he and Harry exit the shuttle, Harry disables AJ's oxygen feed tube and forces him back into the shuttle, telling him to take care of Grace.

The crew manages to start the shuttle and they take off leaving Harry behind. Harry contacts Grace at NASA headquarters and they exchange last goodbyes. Harry is rocked by several quakes but manages to reach the detonator. He pushes the button just before zero barrier is breached. The asteroid is blasted in half and the two pieces miss collision with Earth.

The "Freedom" crew lands safely back on Earth and are met by NASA officials and Grace. She and AJ are reunited. AJ and Grace wed at the end of the film.

The film was an international box office success, but it received a large amount of criticism from film reviewers. On "" it scores 40%; [ [http://www.rottentomatoes.com/m/1083337-armageddon/ Armageddon - Movie Review - Rotten Tomatoes] ] on a similar website, "", it similarly scores 42%. The film is on the list of 's most hated films: in his original review, he stated "The movie is an assault on the eyes, the ears, the brain, common sense and the human desire to be entertained". [ [http://rogerebert.suntimes.com/apps/pbcs.dll/article?AID=/19980701/REVIEWS/807010301/1023 Roger Ebert - Armageddon] ] In contrast, his long-time friend from the show "Siskel & Ebert" gave it a "thumbs up."

The film received the s for Best Direction and Best Science Fiction Film (where it tied with "Dark City"). However, it was also nominated in seven categories for the for bad films; only one was awarded: Bruce Willis received the Worst Actor award for "Armageddon", in addition to his appearances in "" and "".

Despite the general critical disdain, a DVD edition of "Armageddon" was released by , a specialist film distributor of primarily films that markets what it considers to be "important classic and contemporary films" and "cinema at its finest". [ [http://www.criterion.com/asp/about.asp The Criterion Collection - About Criterion] ] In an essay supporting the selection of "Armageddon", film scholar Jeanne Basinger, who taught Michael Bay at , states that the film is "a work of art by a cutting-edge artist who is a master of movement, light, color, and shape—and also of chaos, razzle-dazzle, and explosion". She sees it as a celebration of working men: "This film makes these ordinary men noble, lifting their efforts up into an epic event." Further, she states that in the first few moments of the film all the main characters are well established, saying, "If that isn't screenwriting, I don't know what is". [ [http://www.criterion.com/asp/release.asp?id=40&eid=56&section=essay&page=1 The Criterion Collection: Armageddon by Michael Bay] ]

While science fiction films are generally not meant to be realistic, "Armageddon" is noted for its large number of scientific inaccuracies. In an interview with "Entertainment Weekly", Michael Bay said that the solution for the asteroid situation was great for the movie but not possible in real life, while adding that real-life "anti-gravity" systems for such a situation were being worked on by NASA. Bay also said that in real life, people who would think that it was possible to deal with an asteroid based on the movie would be mistaken.

The physics and scientific approach of "Armageddon" was criticized for its poor adherence to the laws of physics, such as the asteroid having gravity like Earth. This has led NASA to show the film as part of its management training program. Prospective managers are asked to find as many inaccuracies in the movie as they can. At least 168 impossible things have been found during these screenings of the film. ["" ( ), "Feedback" p 72: ISSN 0262-4079] The movie also adheres to standard Hollywood conventions when it comes to science, such as having noise in space.

Following the 2003 "Columbia" disaster, some screen captures from the opening scene where "Atlantis" is destroyed were passed off as satellite images of the "Columbia" disaster in a hoax. [ [http://www.breakthechain.org/exclusives/shuttlepics.html Photos of the Shuttle Columbia Disaster? - BreakTheChain.org ] ] Also, in response to the disaster, FX pulled "Armageddon" from that night's schedule and replaced it with "Aliens". [ [http://www.cbsnews.com/stories/2003/02/03/entertainment/main539194.shtml TV Pulls Shuttle Sensitive Material, Hewlett-Packard Ad, Bruce Willis Movie Yanked From Air - CBS News ] ]

The soundtrack also features the song "Remember Me", as performed by Journey. This song was the first studio recording with new lead vocalist , who was hired to replace long-time singer Steve Perry after his departure from the band. 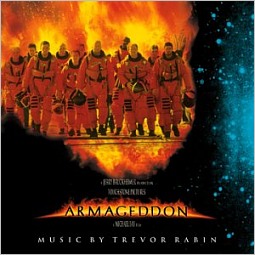 There was also an instrumental score titled "Armageddon: Original Motion Picture Score" by . Rabin was formerly a member of the band Yes.