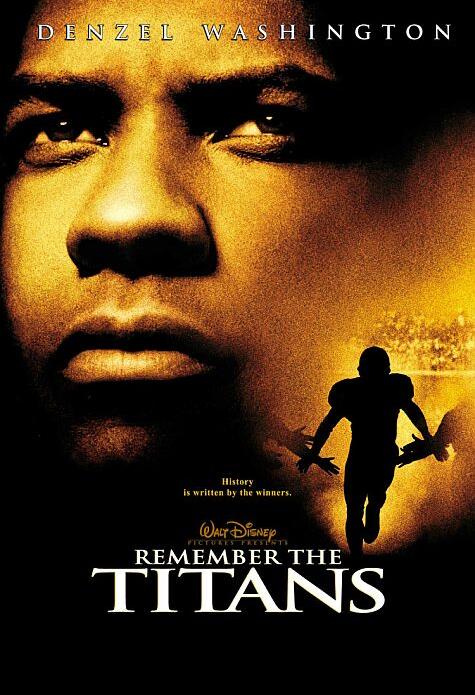 "Remember the Titans" is a 2000 American sports drama directed by , and produced by for . The film stars as Coach . "Remember the Titans" centers on the football team of the newly integrated in . The critical and commercial success of the movie led to Disney producing many other sports films.

The film is based on true events and takes place in , in 1971, at brand new desegregated . () is hired as head coach for the school's football team, taking the place promised to former head coach (). Yoast at first refuses Boone's offer of a position as assistant head coach, but then changes his mind. The black and white members of the football team clash in racially-motivated conflicts on a few occasions throughout their time at football camp, but after forceful coaxing and team building efforts by Coach Boone, the team manages to achieve some form of unity, as well as success. Boone makes the camp quite rigorous; the bus leaving for the camp at the beginning is to depart at precisely 7:29 am and all members are instructed to wear a shirt and tie; anyone not doing so will watch the season and not compete. At the camp, anybody who displays any sort of misconduct at practice is instructed to run a mile, and along the route passing through Civil War gravestones. The main conflict is taken to a personal level by the portrayal of the conflict between () and Julius Campbell (), two players of equally outstanding athletic ability, but different ethnic backgrounds, who at first can't stand one another but eventually become sworn brothers (the turning point of their relationship becomes a focal point for the team in its racially divided ways giving way to true unity). Upon return from camp to school, the team runs through its regular season competition undefeated while battling the racial prejudice that was then typical of, though not exclusive to, the . All American player is paralyzed in an automobile accident while celebrating one of the later team's victories. Although Bertier is no longer able to play, the team goes on to win the championship, setting an example for the town in the process. The football team wins the AAA State championship game in , and is first runner up in the national championship. Bertier later goes on to win a gold medal in the shotput event at the . Ten years later, the team reunites at the end of the film to attend Bertier's funeral, after he was killed in another auto accident.

composed the instrumental score, of which "Titan's Spirit" was the only cue (of 12 composed) added to the soundtrack. "Titan's Spirit" was a rousing seven-minute exploration of the movie's energetic themes. It is used presently on many sports telecasts, particularly those on , which has used the score during its montage for the last four (Salt Lake 2002, Athens 2004, Torino 2006 and Beijing 2008) as well as with the final closing credits montage for their 12-year run with the NBA in 2002. It was also used by the event's organizers to accompany the celebration and fireworks at at the end of the after had given his acceptance speech, and as veteran players crossed home plate during the closing ceremonies at .

Several locations around were used for . This included , Shamrock Middle School, Paulding County High School [ [http://www.imdb.com/title/tt0210945/trivia Remember the Titans (2000) - Trivia ] ] , the city square in Covington, GA, Newton County's Sharp Stadium, in , and the of in Marietta and Etowah High School in . Also used was in . The football practice field of Clarkston High School and Victory Stadium in were also used.