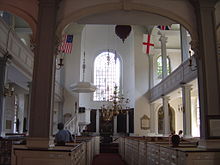 Interior of the Old North Church

Old North Church (officially, Christ Church in the City of Boston), at 193 Salem Street, in the North End of Boston, is the location from which the famous "One if by land, and two if by sea" signal is said to have been sent. This phrase is related to Paul Revere's midnight ride, of April 18, 1775, which preceded the Battles of Lexington and Concord during the American Revolution.

The church is a parish of the Episcopal Diocese of Massachusetts. It is the oldest active church building in Boston and is a National Historic Landmark. Inside the church is a bust of George Washington, which the Marquis de Lafayette reportedly remarked was the best likeness of him he had ever seen.

Old North Church was built in 1723, and was inspired by the works of Christopher Wren, the British architect who was responsible for rebuilding London after the Great Fire. 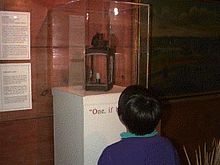 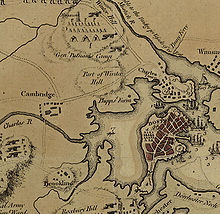 The land and water routes out of Boston are shown in this detail from a map drawn later that year to depict the Siege of Boston.

Paul Revere told three Boston patriots to hang two lanterns in the steeple. These men were the church sexton Robert Newman, and Captain John Pulling, the two of whom David Hackett Fischer suggests each carried one lantern up to the steeple, and Thomas Bernard, who stood watch for British troops outside the church. The lanterns were displayed to send a warning to Charlestown patriots across the Charles River about the movements of the British Army. Revere and William Dawes would later deliver the same message to Lexington themselves, but this lantern method was a fast way to inform the back-up riders in Charlestown about the movements of the British; these back-up riders planned to deliver the warning message to Lexington and Concord in case Revere and Dawes were arrested on the way.

The lanterns were hung for just under a minute to avoid catching the eyes of the British troops occupying Boston, but this was long enough for the message to be received in Charlestown. The militia waiting across the river had been told to look for the signal lanterns, and were prepared to act as soon as they saw them.

The meaning of two lanterns has been memorized by countless American schoolchildren.

One if by land, and two if by sea is from Henry Wadsworth Longfellow's poem, "Paul Revere's Ride". One lantern was to notify Charlestown that the British Army would march over Boston Neck and the Great Bridge, and two were to notify them that the troops were taking boats across the Charles River to land near Phips farm. After receiving the signal, the Charlestown Patriots sent out a rider to Lexington, but this rider did not reach his destination and his identity has disappeared from history. He was the one who might have been captured by a British patrol.

But the warning was delivered miles away to dozens of towns, first by Revere and Dawes on horses, and then by other men on horses and men who rang church bells and town bells, beat drums, and shot off warning guns. (Current status of the lanterns is not entirely clear; one is said to be in the hands of a private collector, another broken during a tour, and yet another is on display at the Concord Museum.)

This statue of Paul Revere outside the Old North Church commemorates his memorable ride.

"Let us pray here in the Old North Church tonight that those who follow 100 years or 200 years from now may look back at us and say: We were a society which combined reason with liberty and hope with freedom. May it be said above all: We kept the faith, freedom flourished, liberty lived. These are the abiding principles of our past and the greatest promise of our future."

On July 11, 1976, Queen Elizabeth II visited Boston and made reference to that event. She said,

"At the Old North Church last year, your President lit a third lantern dedicated to America's third century of freedom and to renewed faith in the American ideals. May its light never be dimmed."

The Queen and Prince Philip attended a Sunday morning service at the Old North Church, sitting in a pew at the right front. The Rev. Robert W. Golledge led the service and later presented The Queen with a replica of a silver chalice made by Paul Revere. The Queen was shown the iconic statue of Paul Revere by Cyrus E. Dallin near the church before departing in a motorcade to attend a function at the Old State House.

Steeple of the Old North Church

Eight change ringing bells at Old North Church were cast in Gloucester, England in 1744 and hung in 1745. One bell has the inscription: We are the first ring of bells cast for the British Empire in North America, A.R. 1744. The bells were restored in 1894 and in 1975. They are maintained and rung regularly by the Massachusetts Institute of Technology Guild of Bellringers. 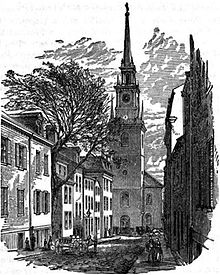 The original steeple of the Old North Church was destroyed by the Storm of October 1804. A replacement steeple, designed by Charles Bulfinch was toppled by Hurricane Carol on August 31, 1954. The current steeple uses design elements from the original and the Bulfinch version. The church is now 175 feet (53 m) tall.[2] At its tip is the original weathervane.

The other "Old North"

Before the construction of the 'Old North Church' (Christ Church, Boston), there was another church in Boston called the "Old North" (Meetinghouse). This Congregationalist meetinghouse was founded in North Square, across the street from what is now called Paul Revere's house.

Currently an archeologist is examining the estimated 1100 bodies buried in 37 tombs in the basement.[3] The crypt was in use between 1732 and 1853, and each tomb is sealed with a wooden or slate door, with many doors covered over by plaster as ordered by the city of Boston in the 1850s. The founding rector of the church, Timothy Cutler, was buried right under the altar above. Other notable figures buried under the church include British Marine Major John Pitcairn, who died at the Battle of Bunker Hill and was entombed along with many other soldiers killed in this battle, and Captain Samuel Nicholson of the U.S.S. Constitution.