Coat of arms of Ukraine

Coat of arms of Ukraine 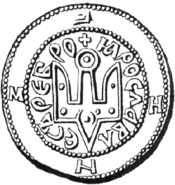 The trident on a coin of Yaroslav I the Wise, among the earliest such depictions. 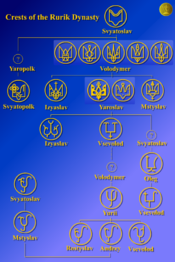 Personal crests of the Rurik Dynasty.

The history of the trident symbol as featured in the current Ukrainian coat of arms is more than 1000 years old. The first known archeological and historical evidence of this symbol can be found on the seals of the Rurik dynasty. The tryzub was stamped on the gold and silver coins issued by Prince Vladimir the Great (980–1015), might have inherited the symbol from his ancestors (such as Sviatoslav I Igorevich) as a dynastic coat of arms and passed it on to his sons, Sviatopolk I (1015–19) and Yaroslav the Wise (1019–54).

The tryzub was also found on the bricks of the Church of the Tithes in Kiev, the tiles of the Dormition Cathedral in Volodymyr-Volynskyi, and the stones of other churches, castles, and palaces. There are many examples of it used on ceramics, weapons, rings, medallions, seals, and manuscripts. Since the tryzub was so widely used, it evolved many variations without losing its basic structure. Almost 200 medieval variations of the tryzub have been discovered in Ukraine.

There is no sure and definite interpretation of the symbol, however, most historians agree that it most probably depicts a stylized falcon which according to the Slavic mythology was the Primary god (Pershoboh).[1] The use of this symbol has been supplanted since the 11th century by the Christian tradition of using the images of the saints (most notably Saint George or Saint Michael) considered to be the protectors of the ruling family, and later by Galician or Cossack heraldic or cultural images.

The trident was not thought of as a national symbol until 1917, when one of the most prominent Ukrainian historians, Mykhailo Hrushevsky, proposed to adopt it as a national symbol (alongside other variants, including an arbalet, a bow or a cossack carrying a musket, i.e. images that carried considerable historical and cultural and heraldic significance for Ukraine). On 22 March 1918, the Central Rada (parliament) adopted it as the coat of arms of the short-lived Ukrainian People's Republic.

Constitutional provisions exist for the establishment of a Great Coat of Arms of Ukraine,[2] although it was never officially adopted and was published in various heraldic sources. In this variant, the shield is supported by a lion from the Galician Coat of Arms on the left and a Cossack in traditional dress, wielding a musket, the symbol of the Cossack Hetmanate on the right. The Coat of Arms is crowned with the crown of Vladimir the Great, symbolizing Ukrainian sovereignty and decorated with viburnum and wheat at the bottom.

The official adoption of the Great Coat of Arms has to be endorsed by a majority by two thirds vote in the Verkhovna Rada (Ukrainian parliament) because of the resistance of the Communist and pro-Russian parties.

The Tryzub was also used, in conjunction with the Russian tricolor, as the symbol of the anti-communist movement National Alliance of Russian Solidarists in the early 20th century. Furthermore the Tryzub is heavily used in the military heraldry of the Italian Army to commemorate the Italian participation on the Eastern Front during World War II. At least 36 units of the Italian Army carry the Tryzub in their Coat of Arms, as they were awarded a Medal for Military Valor during their service on the territory of Ukraine.