The Ukrainian Ground Forces (Ukrainian: Cухопутні Війська ЗСУ, Sukhoputni Viys’ka ZSU) are the land force component of the Military of Ukraine. They were formed from Soviet Army formations, units, and establishments, including three military districts (the Kiev, Carpathian, and Odessa Military Districts), that were on Ukrainian soil when the Soviet Union collapsed in 1990-92. Between the fall of the USSR and the late 1990s, Ukraine kept much army equipment from that era. Since then, however, Ukraine has upgraded its Ground Forces with advanced additions from domestic engineering and modifications. Currently, the Ukrainian Armed forces buy military equipment only from Russia and other CIS states, as well as locally producing some of their own equipment.

Before the collapse of the Soviet Union, three separate self-governing Ukrainian states were in existence during the 20th Century, all of which had national armed forces. The largest of these, the Ukrainian People's Republic, itself existed of three separate regimes. The Ukrainian People's Army is an example of one of the early national armed forces. Other armed independence movements existed in the wake of both the First World War and the Second World War, and these militaries had their own organization and uniforms. These armed forces, and the independent Ukrainian homeland for which they fought, were eventually incorporated into the neighbouring states of Poland, Soviet Union, Hungary, Romania and Czechoslovakia.[1]

Collapse of the USSR 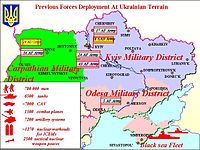 Following the dissolution of the Soviet Union and renewed declaration of Ukrainian independence in 1991, Ukraine inherited one of the largest and most powerful armies in Europe. The Ukrainian military was equipped with modern tanks, APCs, artillery, missile defense technology and nuclear weapons. At that time, the ground forces of Ukraine included: three armies of combined forces (including the 1st Guards Army, 13th Army and 38th Army), two tank armies (the 6th Guards Tank Army and the 8th Tank Army), and the 32nd Army Corps at Simferopol.

The Armed Forces of Ukraine included approximately 780,000 personnel, 7000 armored vehicles, 6,500 tanks, and 2,500 tactical nuclear missiles when they were established. However, the problem that Ukraine face was that while it had a vast military, it lacked a proper, centralized command structure. Therefore, on 24 August 1991, the Verkhovna Rada of Ukraine ratified the resolution of taking under its control, all military units of former Soviet Armed Forces, situated on the territory of Ukraine; and in turn the establishment of one of the most important Ministries, the Ministry of Defense. By the end of 1992, the Kiev Military District disbanded, and Ukraine used its structures as the basis for the Ukrainian Ministry of Defence and General Staff.[2]

The Ground Forces are implementing a plan, made in 2000, that includes a reduction in the number of troops from its current 300,000 to 240,000 by 2015, and an ultimate change from a partial conscript-based force to a fully professional military.[3] Even though the Ukrainian military received little more than half of the Hr 68 million it was promised for reform in 2001, officials were able to disband nine regiments and close 21 local military bases. 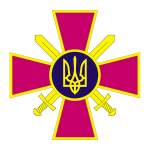 Emblem of the Ukrainian Army

According to the State Program of the Ukrainian Armed Forces reform and development to 2005, the ground forces will have the biggest ratio of personnel of all services (up to 54%). This ratio is based on the missions assigned to the armed forces, and also on the fact that current economical situation in Ukraine cannot support any larger troop numbers. However, the ground forces still have priority in the number of personnel, weapons, military equipment development priorities and the development of their future systems, which will correspond to modern warfare requirements. The ground forces will closely coordinate their assignments with other army branches, engaging appropriate military arts and equipment. They will also be involved in law enforcement activities during emergencies, dealing with consequences of technological and natural disasters, providing military assistance to other countries, engaging in international military cooperation activities (UN), and participating in international peacekeeping operations according to international agreements.

In the short term, the conversion to a professional army will not save Ukraine any money because training and housing greater numbers of professional soldiers will cost more than supporting recruits. However, in the long term, a reduced number of soldiers serving longer terms will not only help conserve the military budget, but will also allow for better training of its forces. 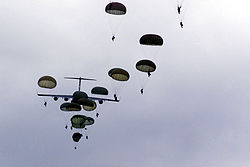 Ukrainian paratroopers during a joint exercise with the 82nd Airborne Division (United States).

Ukrainian armed forces training in 2006 was aimed at supporting the mobility and the readiness of forces to perform the specified missions in the defined situations of employment. It took into consideration the current force strength, organization and staff structure, level of manning, weapons and equipment, and reserves of material and technical means.[4]

The level of the Ukrainian armed forces combat readiness is an indicator of the efficiency of military command and control, and a measure of expediency of implementing the defense budget. It is also the main factor of improvement of Ukraine’s image in the sphere of international stability and security. Thus, the Ministry of Defense and the General Staff concentrated their main efforts on setting the goals and content of personnel combat training for taking practical measures for its intensification and reaching the final results according to the strategic concept of employing the Ukrainian armed forces.[4]

Main efforts and resources were directed to Joint Rapid Reaction Forces (JRRF) training. Measures were also taken to maintain the high level of combat efficiency of the Main Defense Forces units, performing of missions by the units, securing and practicing joint actions with other formations. The Ukrainian armed forces took advantage of the opportunities provided by multinational exercises to raise the level of their combat efficiency.[4]

2006 also saw the first ever large-scale Ukrainian tactical special exercise with practical deployment of a military mobile hospital of the Military Medical Center of the air force. It involved several ambulance aircraft and armored equipment (APC). During the practical phase the possibilities of use of the medical evacuation aircraft. Medical evacuation helicopters and automobiles were also tested. The training framework included an international research conference on the “Methodological basis of medical support organization of the Armed Forces”, in which representatives of the armed forces of Ukraine, NATO nations and other partners participated.[5]

In 2007 the system of exercise/training ranges was optimized, decreasing their number and providing a specialized role.[6]

Training Ranges of the Ground Forces:

Branches of the Ground Forces 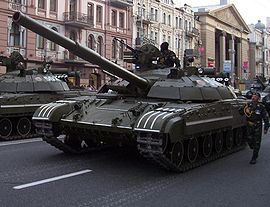 T-64BM Bulat on parade, a Ukrainian upgrade of the T-64, produced by the KMDB

Mechanized and armored forces are the main components of the Ukrainian Ground Forces. Their primary objectives in war are to hold occupied areas, lines, and positions, defend against attack, penetrate an enemy’s defense lines, defeat the enemy forces, capture important areas, lines, and objectives, and finally supply support for marines and other landing troops.

Since the fall of the Soviet Union, a large number of the previous Soviet mechanized formations on Ukrainian soil have been disbanded – the IISS says totals have dropped from 14 divisions, in 1992, to two divisions, six brigades, and one independent regiment in 2008.[7] Today, all mechanized and armored formations are called brigades. However, some former divisions remain near division strength.

The Army aviation, having to cover troop movements, is by far the most maneuverable branch of the army, intended to conduct the operations under all sorts conditions of combat arms procedures. Among the priorities of the Ukrainian army aviation's units is to provide reconnaissance, attack enemy weapon systems, provide equipment and human resources, give tactical fire support during an offensive or counterattack, land airmobile troops, and to deliver combat weapons and personnel at the specified areas and execute other main tasks. The Army aviation's structure consists of two regiments. The army aviation troops are equipped with Mi-8, Mi-24 helicopters, and their variants.

Rocket Forces and Artillery troops of the army consist of formations of operational-tactical and tactical missiles, self-propelled artillery, howitzers, jet-propelled and anti-tank artillery, artillery reconnaissance units, of mortar units and of units of anti-tank missiles. These forces operate as support for they other army formations, therefore, they are obliged to destroy enemy human resources, tanks, artillery, anti-tanks weapons, aircraft, objects of air defense and other important objects during the combat arms operations. Rocket and artillery troops are equipped with: missile complexes of operational-tactical and tactical missiles; Multiple rocket launcher rocket systems, such as the Smerch, Uragan, Grad; also, Giatsint, Pion, Akatsiya, Gvozdika howitzers; and, Konkurs, T-12 antitank gun anti-tank weapons. 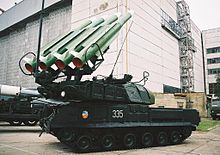 The Army Air Defense units are responsible for covering troops against enemy air attacks anywhere on the battlefield, and while in combat. The Ukrainian Ground Forces army air defense branch is equipped with a variety of effective surface-to-air missile systems of division level and anti-aircraft missile and artillery complexes of regiment level. Regiment level units are characterized by their high rate of fire, vitality, maneuverability, and capability of action under all conditions of modern combat arms operations. Surface-to-air missile systems and complexes of division level are characterized by their long range and firepower and are equipped with surface-to-air missile complexes;S-300V,Osa, Buk, Buk-M1 and Tor. While anti-aircraft missile and artillery complexes that are of regiment level are equipped with the Tunguska-M1, Igla MANPADS system, Strela, and Shilka anti-aircraft missile systems.[9] While the army's only separate radar system, meaning it isn't a part of any anti-aircraft system, is the Ukrainian Kolchuga-M. It was designed sometime between the years 1993-1997, the system is said to be one the most (if not the most) advanced passive sensors in the world, as it was claimed to be able to detect stealth aircraft.[10]

Structure of Ukrainian Ground Forces at the end of 2009 was:[11] 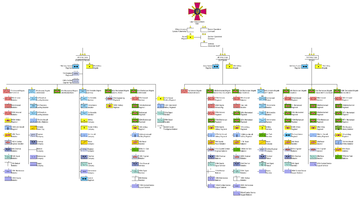 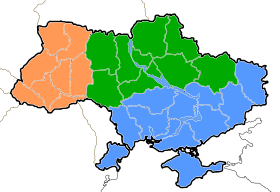 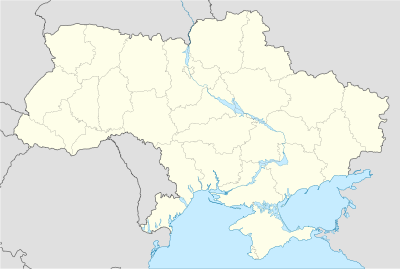 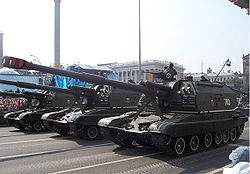 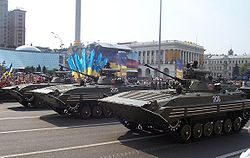 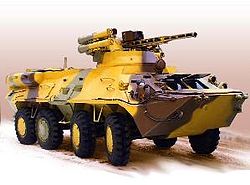