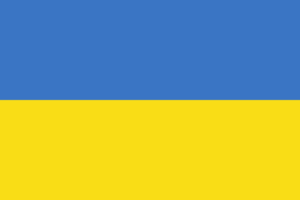 The Flag of Ukraine ( _uk. державний прапор України; translit.: "derzhavnyy prapor Ukrayiny"; literally ‘state flag of Ukraine’) is the national flag of . The national flag was officially adopted for the first time in 1918 by a short-lived . At that time the commonly used yellow–blue flag had already turned into blue and yellow and sported a trident ("") in the upper left corner. The insignia remained unchanged by the successive government of , and then by the .

Under Soviet rule, had been using red and later red-blue flags as the official . The blue and yellow flag was forbidden as a symbol of . It was officially restored in 1992 following Ukrainian independence.

of the states “the State Flag of Ukraine is a banner of two equally sized horizontal bands of blue and yellow colour.”

The roots of Ukrainian national symbols come from before Christian times when yellow and blue prevailed in traditional ceremonies, reflecting fire and water.

In times, yellow and blue continued to be popular. These colours were used on the banners of the principality in the 13th–14th centuries.

Yellow–blue, red-black, crimson-olive and especially raspberry color banners were widely used by s between 16–18th centuries. These were not the only possible combinations, since normally Cossacks would fly their 's banners, which were similar to the coats of arms of the nobility. Also, yellow and blue were the colours common on coats of arms in Galicia. In fact, the coat of arms of to this day remains a golden lion on a blue field.

Some put the starting point of the current national flag of Ukraine in year 1848, when during the Spring of the Nations a yellow and blue banner flew over the Lviv magistrate for the first time. Although this move didn't have significant consequences, the newly formed Ukrainian divisions in the Austrian army used yellow and blue banners in their insignia.

It has to be noted that although most Ukrainians identify their flag in the verbal language as "yellow and light blue" ( _uk. жовто-блакитний, "zhovto-blakytnyy"), the current flag in reality is blue (the top string) and yellow (the bottom string). The issue is quite notable, because the historical rotation of the flag (from yellow–blue to blue–yellow) did not affect the spoken language. Back in 1848 the flag was indeed yellow and blue, and it was later rotated to blue and yellow to be appealing to a common person. The common explanation of "blue sky above yellow field of wheat" was invented around that time, and, although it has nothing to do with the choice of colours and the history of the original yellow and blue banner, it certainly formed the flag as we know it today.

In the late 19th century, the Austro-Hungarian Empire was much more tolerant toward the Ukrainian national movement than the Russian Empire. A lot of literary work was done there, thus spreading the idea to the rest of Ukraine.

Both, blue–yellow and yellow–blue flags were widely used during the Ukrainain struggle for independence in 1917-1920.

At present, there are no reliable sources that indicate that an official flag was declared by the in 1917-1918. Some sources mention that the yellow–blue was adopted by on , [ [http://www.kmu.gov.ua/control/uk/publish/article?art_id=32027&cat_id=31295 State Symbols of Ukraine] , , website.] Other sources point out that no hard proof of such decision exists. [http://vexillography.narod.ru/ukraine/unr.htm] Instead, they refer to the decision on the Fleet Flag, which was set to be light blue–yellow [ [http://www.history.org.ua/journal/1999/4/10.pdf Ukrainian Historical Journal, 1999, #4, ISSN 0130-S247] as an indication that the official flag was light blue–yellow. [ [http://vijsko.milua.org/Khoruhvy_HA.htm Українське військо у ХХ-ХХІ сторіччі] ]

The official flag of 's was blue–yellow and became light blue–yellow under 's Directorate. The flag of was blue and yellow.

Among Ukrainian immigrant organizations there were proponents of both blue–yellow and yellow–blue flags. Eventually, it was agreed to use the light blue–yellow flag until the issue is resolved in the independent Ukraine.

The Soviet Ukraine similarly to other Soviet republics, used a red flag with golden abbreviation "УСРР" or "УРСР" (Ukrainian Socialist Soviet Republic, or Ukrainian Soviet Socialist Republic from 1936) in the top left corner. In 1937 symbol in gold was added to the flag.

Various Ukrainian nationalist movements that functioned under German occupation used a blue–yellow (more often) or a yellow–blue flag. The OUN ('s faction) added its symbol in the upper left part. Ukrainian municipal and police bodies used the same flag, but its use depended on the favor of local German (military) authorities. The police used armbands with yellow and blue stripes, which could look differently in different regions. [http://ffix1975.livejournal.com/1031966.html]

The Revolutionary Faction of the OUN ('s faction) used a different flag, red-black.

In 1947 Soviet republics, including Ukraine, adopted new flags instead of previous featureless ones. The new Ukrainian flag consisted of a red (top, 2/3) and a blue (bottom, 1/3) stripes, with golden star, hammer and sickle in the top left corner.

Return of the national flag

Under the influence of 's and years, the individual Soviet republics had strengthened their sense of national unity, which led to the Collapse of the Soviet Union in 1991. This concerned the three and Western Ukraine, which were the last territories annexed into Soviet Union. These efforts were accompanied with attempts to restore the respective historical national symbols. In 1988, the Supreme Soviet of the Lithuanian SSR re-established Lithuania's historic coat of arms as the state symbol. The Parliaments of and soon followed.

The events in the Baltic countries soon led to similar processes in Ukraine. Particularly, West Ukraine and 's capital ("Kyiv") constantly held political demonstrations with the national yellow-and-blue flags waving above the heads of demonstrators.

* On , , the oblast council ("oblasna rada") of Lviv also allowed the use of the national symbols of Ukraine within the Oblast.

* On , , the yellow-and-blue flag was flown from the Ternopil city theater's flagstaff without the official flag of the Soviet Union hanging above it.

* After , , the yellow-and-blue flag was flown for the first time over an official governmental building of the on the "" square of the "" street.

* After the declaration of independence of Ukraine on , , the national yellow-and-blue flag flew for the first time over the Ukrainian Parliament ("Verkhovna Rada") building on , .

The Law of Ukraine states that the colors of Ukrainian flag are "blue and yellow", being silent on the specifics of the blue and yellow colors. Heraldic communities attempt to fill the gap and specify the "true" colors of the flag. In the table below the colors are given according to amateurs site vexilla-mundi.com:

In Ukrainian and other Slavic languages, light blue ("blakytnyy") and dark blue ("syniy") colors are main distinguished colors. The difference is coming from ancient times. In English (Latin) culture, there are commonly six colors of (red, orange, yellow, green, blue, and violet), while in Ukrainian (Slavic) a rainbow consists of seven colors with blue being split into two. The difference creates difficulties in translation of blue between Ukrainian and English. If blue is avoided for clarity, the colors of the official Ukrainian flag is dark blue and yellow, while in spoken language Ukrainians often name their flag as being yellow and light blue ("zhovto-blakytnyy prapor").