Coat of arms of Italy

Coat of arms of Italy 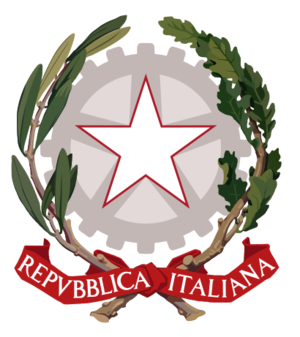 The Coat of Arms of the Italian Republic (Italian, trans. "Stemma della Repubblica Italiana"), depicted here, has been the symbol of the Italian Republic since 05 May 1948. ["Foggia ed uso dell'emblema dello Stato" [http://www.infoleges.it/service1/scheda.aspx?id=99049&service=1 DECRETO LEGISLATIVO 05 maggio 1948, n. 535] , pubblicato nella n. 122 del 28 maggio 1948 suppl. ord.] Technically it is an rather than a , as it was not designed to conform to traditional heraldic rules. The armorial bearings of the , ed "gules a cross argent", were previously in use by the former Kingdom of Italy; the , on either side "a lion rampant Or", substituted by fasci littori (literally "bundles of the ") during the fascist era. [REGIO DECRETO 11 aprile 1929 VII, n. 504]

The emblem comprises a white five-pointed star, with a fine red border, superimposed upon a five-spoked , standing between an branch on the dexter side and an branch on the sinister side; the green branches are in turn bound together by a red ribbon bearing the inscription REPVBBLICA ITALIANA in white capital letters.
*The dominant element is a five-pointed star; an ancient secular symbol of Italy, known as "Stellone d'Italia", purported to protect the nation and used as the crest of the arms of the Kingdom of Italy from 1870 to 1890. [Deliberazione della del Regno d’Italia [http://www.cnicg.net/ca1870b.asp con cui si determina quali debbano essere gli ornamenti esteriori dello stemma dello Stato] , 04 maggio 1870; REGIO DECRETO 27 novembre 1890, n. 7282] Iconographic of the , it is usually seen shining radiant over , the personification of Italy. The star marked the first award of Republican reconstruction, the Ordine della Stella della Solidarietà Italiana, and still indicates membership of the Armed Forces today
*The steel cogwheel refers to the :&mdash;:Its shape also recalls a , as worn by Italia Turrita (meaning "with towers"), typical of Italian civic heraldry of communal origin
*The olive branch represents the Republic’s desire for peace, both harmony at home and brotherhood abroad, as expressed in the Constitution:&mdash;
*The oak branch is symbolic of the strength and dignity of the Italian people. Both oak and olive trees are also characteristic of the Italian landscape

The decision to provide the new Italian Republic with an emblem was taken by the government of in October 1946. The design was chosen by public competition, with the requirement that party political emblems were forbidden and the inclusion of the Stellone d'Italia, "inspired by a sense of the earth and municipalities." The five winners were assigned further requirements for the design of the emblem, "a ring that has towered shaped crown," surrounded by a garland of Italian foliage and flora. Below a representation of the sea, and above, the gold star, with the legend "Unità e Libertà" or Unity and Liberty in the . The winner was , Professor of the Institute of Fine Arts in Rome from 1914 to 1948, and the design was presented in February 1947, together with the other finalists, in an exhibition in Via Margutta. This version, however, did not meet with public approval, so a new competition was held, again won by Paolo Paschetto. The new emblem was approved by the Constituent Assembly in February 1948, and officially adopted by the , in May 1948.