Myron Leon "Mike" Wallace (born May 9, 1918) is an American journalist, former game show host, actor and media personality. During his 60+ year career, he has interviewed a wide range of prominent newsmakers.

Wallace was one of the original correspondents for CBS' 60 Minutes which debuted in 1968. Wallace retired as a regular full-time correspondent in 2006, but still appeared occasionally on the series until 2008.

Wallace, whose family's surname was originally Wallechinsky,[1] was born in Brookline, Massachusetts, to Russian Jewish parents Zina (Sharfman) and Frank Wallace, a wholesaler grocer and insurance broker.[2] In Brookline, he attended Brookline High School, graduating in 1935.[3] He went on to the University of Michigan, graduating in 1939 with a Bachelor of Arts degree. While at Michigan he reported for the Michigan Daily and was a member of the Alpha Gamma Chapter of the Zeta Beta Tau Fraternity.[4]

Wallace appeared as a guest on the popular radio quiz show Information Please on February 7, 1939, while still a senior at the University of Michigan. His first job in radio was as newscaster and continuity writer for WOOD Radio in Grand Rapids, Michigan. This job lasted until 1940 when he joined WXYZ Radio in Detroit, Michigan, as an announcer. He then went on to become a freelance radio worker in Chicago, Illinois.

Wallace joined the U.S. Navy in 1943, serving as a communications officer during World War II aboard the USS Anthedon, a submarine tender. He saw no live fire in almost three years, traveling to Hawaii, Australia, and Subic Bay in the Philippines and patrolling the South China Sea, the Philippine Sea and in waters south of Japan. After the war, he returned to Chicago.

Wallace also announced wrestling in Chicago in the late 1940s and early 1950s. The advertiser was Tavern Pale beer.

By the late 1940s Wallace was a staff announcer for the CBS radio network. He had a rare chance to display his comic skills when he appeared opposite Spike Jones in dialogue routines. He was also the voice representing Elgin-American in their commercials on Groucho Marx's You Bet Your Life during 1949.

In 1949, under his birth name Myron Wallace, he starred in the short-lived police drama Stand By for Crime.[6]

During the 1950s, Wallace hosted a number of game shows, including The Big Surprise, Who's the Boss? and Who Pays?. Early in his career Wallace was not known primarily as a news broadcaster. It was not uncommon during that period for newscasters (the term then used) to announce, do commercials and host game shows; Douglas Edwards, John Daly, John Cameron Swayze and Walter Cronkite hosted game shows as well. Wallace also hosted the pilot episode for Nothing but the Truth, which was helmed by Bud Collyer when it aired under the title, To Tell the Truth. Wallace occasionally served as a panelist on To Tell the Truth in the 1950s. He also did commercials for a variety of products, including Procter & Gamble's Fluffo brand shortening. 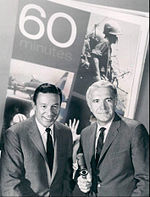 Wallace and Harry Reasoner on the 60 Minutes premiere, 1968.

By the early 1960s, Wallace's primary income came from commercials for Parliament cigarettes, touting their "man's mildness" (he had a contract with Philip Morris to pitch their cigarettes as a result of their original sponsorship of The Mike Wallace Interview). He hosted a New York based nightly interview program for Metropolitan Broadcasting stations (MetroMedia) called PM East one hour; it was paired with PM West, 30 minutes, hosted by San Francisco Chronicle television critic Terrence O'Flaherty. Also in the early 1960s, he was the host of the David Wolper produced Biography series. After his elder son's death, however, Wallace decided to get back into news, and hosted an early version of The CBS Morning News, from 1963 through 1966. In 1964 he interviewed Malcolm X who, half jokingly commented "I probably am a dead man already".[7]

His career as the lead reporter on 60 Minutes naturally led to some run-ins with the people interviewed. While interviewing Louis Farrakhan, Wallace alleged that Nigeria is the most corrupt country in the world. Farrakhan immediately shot back, declaring "Nigeria didn't bomb Hiroshima or slaughter millions of Indians!" "Can you think of a more corrupt country?" asked Wallace. "I am living in one," said Farrakhan. Wallace expressed regret in regard to the one big interview he was never able to secure: First Lady Pat Nixon.[8]

On March 14, 2006, Wallace announced his retirement from 60 Minutes after 37 years with the program. He continued working for CBS News as a "Correspondent Emeritus", albeit at a reduced pace.[9] In August 2006 Wallace interviewed Iranian President Mahmoud Ahmadinejad.[10] Wallace's last CBS interview to date was with retired baseball star Roger Clemens in January 2008 on "60 Minutes." [11] Wallace has suffered from health problems more recently and in June 2008 his son Chris said that his father would not be returning to television.[12]

Wallace's professional honors include at least 20 Emmy Awards, among them a report just weeks before the 9/11 terrorist attacks for an investigation on the former Soviet Union's smallpox program and concerns about terrorism. He has also won three Alfred I. duPont-Columbia University Awards, three George Foster Peabody Awards, a Robert E. Sherwood Award, a Distinguished Achievement Award from the University of Southern California School Of Journalism and a Robert F. Kennedy Journalism Award in the international broadcast category. In September 2003, Wallace received a Lifetime Achievement Emmy, his 20th. Most recently, on October 13, 2007, Wallace was awarded the University of Illinois Prize for Lifetime Achievement in Journalism.

Wallace interviewed Gen. William Westmoreland for the CBS special The Uncounted Enemy: A Vietnam Deception, aired January 23, 1982.[13] Westmoreland then sued Wallace and CBS for libel. In February 1985, the parties settled just before the case was to go to trial. Each side agreed to pay its own costs and attorney's fees and CBS issued a clarification of its intent with respect to the original story.

In a 1967 on CBS Reports: The Homosexuals, Wallace said the following: "This much is certain. Male homosexuals in America number in the millions. And their number is growing. They are attracted mostly to the anonymity that a big city gives them. New York, Chicago, Los Angeles, San Francisco. The permissiveness and the variety of the city draw them. The average homosexual if there be such, is promiscuous. He is not interested in or capable of a lasting relationship like that of a heterosexual marriage. His sex life, his love life, consists of a series of chance encounters at the clubs and bars he inhabits, and even on the streets of the city. The one-night stand is a characteristic of the homosexual relationship...."

For his part, anchor Mike Wallace came to regret his participation in the episode. "I should have known better," he said in 1992.[14] Speaking in 1996, Wallace stated, "That is—God help us—what our understanding was of the homosexual lifestyle a mere twenty-five years ago because nobody was out of the closet and because that's what we heard from doctors—that's what Socarides told us, it was a matter of shame."[15] As recently as 1995, Wallace told an interviewer that he believed homosexuals could change their orientation if they really wanted to.[16]

Wallace was played by actor Christopher Plummer in the 1999 feature film, The Insider. The screenplay was based on the Vanity Fair article, "The Man Who Knew Too Much" by Marie Brenner, which accused Wallace of capitulating to corporate pressure to kill a story about Jeffrey Wigand, a whistle-blower trying to expose Brown & Williamson's dangerous business practices. Wallace, for his part, disliked his on-screen portrayal and maintains he was in fact very eager to have Wigand's story aired in full.

Wallace was played by actor Stephen Rowe in the stage version of Frost/Nixon, but he was omitted from the screenplay of the 2008 film adaptation.

In the TV movie Hefner: Unauthorized from 1999, Wallace is portrayed by Mark Harelik. In the 1957 film A Face In The Crowd, Wallace portrays himself.