Meredith Louise Vieira (born December 30, 1953) is an American journalist, television personality, and game show host. She is best known for her roles as the original moderator of the ABC talk program The View and co-host of the long-running NBC News morning news program, Today. She currently contributes to Dateline NBC and Rock Center with Brian Williams, and hosts the syndicated version of Who Wants to Be a Millionaire, having replaced Regis Philbin in 2002. She also presented Intimate Portrait, a series on Lifetime.

Vieira was born in East Providence, Rhode Island, to Mary Louisa Elsie Rosa Silveira Vieira (October 28, 1904 – November 5, 2004) and Dr. Edwin Vieira (May 15, 1904 – February 1987), both first-generation Portuguese Americans. All four of Vieira’s grandparents came from the Azores, three from Faial Island, one of the nine islands in the archipelago. They all left for a better life in New England in the late 19th and early 20th centuries – settling around Providence, RI. She is the youngest of four children, with three older brothers.[1] Vieira was raised Roman Catholic, but has stated in recent interviews that she has "spirituality, not a religion."[2] Vieira attended the Lincoln School, a Quaker all-girls school in Providence. She graduated magna cum laude with a degree in English from Tufts University and began her career in 1975 as a news announcer for WORC radio in Worcester, Massachusetts, doing afternoon drive news during the B.J. Dean show. She began a career in television working as a local reporter and anchor at WJAR-TV Providence, eventually making her way into the newsroom at WCBS-TV in New York City where she was an investigative reporter from 1979 to 1982.

Vieira first gained national recognition as a CBS reporter based in their Chicago bureau from 1982 to 1984. She later became a correspondent for nationwide news-magazine shows including West 57th (1985–89) and 60 Minutes (1989–91). Her final assignment at CBS was as co-anchor of the CBS Morning News (1992–93). She moved to ABC initially as a correspondent for the news-magazine show Turning Point (1993–97). Following the cancellation of Turning Point, Vieira realized:

Vieira served as the original moderator and co-host of ABC's The View from its debut in 1997 through the spring of 2006. As moderator, she introduced "Hot Topics," guided conversations, and broke to commercials. She began each live episode saying "Hello! And welcome to The View!" Vieira's final appearance on The View was June 9, 2006. Her co-hosts gave her a roast to commemorate her final appearance.

In August 2006, Vieira told Time that she hasn't watched The View since she left the show, except the episode when Star Jones announced she was leaving. She said it was "very sad" what's happened to it: "I'm proud of the work we did there, but it's not a good time in the history of the show... It's hard to watch. It sort of became a joke."[3] On August 29, 2006, Vieira told the New York Post that she didn't mean that The View was a joke. She said the interview was taken out of context. "I felt that the media was turning [The View] into a joke, not that the show was a joke," she says. Time added a clarification to its website, saying "[Vieira] assures Time that in no way were her comments meant to be insensitive or derogatory..."[4]

Who Wants to Be a Millionaire

Vieira has hosted the American syndicated version of Who Wants to Be a Millionaire since 2002—a continuation of the primetime show hosted by Regis Philbin. The daytime quiz show is syndicated by Buena Vista Television, a division of ABC. In 2005 and again in 2009, Vieira won a Daytime Emmy Award as Outstanding Game Show Host for her role on Millionaire. As an executive producer, Vieira has a financial investment in the show.

Vieira was a celebrity contestant on the Philbin version of Who Wants to Be a Millionaire before she hosted the syndicated version, winning $250,000 for her charity. She even made an appearance on the ABC version during the show's 10th anniversary series, hosting its final segment while Philbin himself was given the opportunity to answer one question in order to win $50,000 for his selected charity. 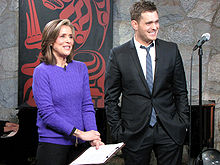 Vieira accepted an offer to succeed Katie Couric as co-anchor of Today on April 6, 2006, the day after Couric announced that she would depart the show to become anchor of the CBS Evening News. The following day, Vieira announced on The View that she would be leaving the show to be co-anchor of Today, a role View co-host and ABC News journalist Barbara Walters had filled nearly four decades earlier during her tenure at NBC during the 1960s and 1970s. Vieira hosted the show with Matt Lauer from September 13, 2006 through June 8, 2011, also becoming a contributing anchor for Dateline NBC.[5][6]

Vieira continued as host of Millionaire while appearing on Today. As part of her contract with Millionaire, Vieira agreed not to appear on Today during hours that would conflict with the airing of the game show on competing stations. As a result, she rarely appeared on the third or fourth hours of Today. Her first appearance during the third hour came on June 25, 2008, for "Today Throws a Wedding". She also appeared during the entire third hour during the Beijing Olympics, Vancouver Olympics and the Barack Obama inauguration on January 20, 2009.

Vieira announced on May 9, 2011 that she would depart as co-host in the following month, but would remain at NBC News in an as-yet undetermined role. Her last appearance as co-host was on June 8; she returned to Today on October 31, 2011 for the show's Halloween episode. She is currently a contributor to Dateline NBC and a correspondent on Rock Center with Brian Williams.

Vieira married Emmy-award winning CBS News journalist Richard M. Cohen on June 14, 1986.[10][11] They reside with their three children in Irvington in Westchester County, New York. Richard Cohen has had multiple sclerosis since he was 25 years old, and has had two bouts of colon cancer, one in 1999 and one a year later.[12]

Vieira joined 60 Minutes in 1989 following the birth of her first child. Don Hewitt, executive producer of 60 Minutes, allowed her to work part-time for two seasons so she could care for her child. After that, she would work full-time. But after two years, she became pregnant again and asked to continue the part-time arrangement. Hewitt declined her request, deciding instead to hire someone who would work full-time. Her departure from the show garnered headlines, as a national debate started to take place about whether women could balance both family and career. She turned down opportunities to co-host The Early Show on CBS, and ABC's Good Morning America when her children were young.

Vieira discusses her family and career decisions in the book Divided Lives: The Public and Private Struggles of Three American Women by Elsa Walsh.[13]

In 2006, Vieira received the P.T. Barnum Award from Tufts University for her exceptional work in the field of media and entertainment.