Flay has hosted seven Food Network television programs and appeared regularly on an eighth. He has appeared as a guest on other Food Network shows and hosted a number of specials on the network. Flay is featured on the Great Chefs television series.[3]

Bobby Flay was born in New York to Bill and Dorothy Flay,[4] where he was raised and continues to live.[5] He is a fourth generation Irish American.[6]

At age 8, Flay asked for an Easy-Bake Oven for Christmas, against his father's objections, who thought a G.I. Joe would be more gender-appropriate. He ended up getting both.

Flay dropped out of high school at age 17.[7] Flay said that his first jobs in the restaurant industry were at a pizza parlor and Baskin-Robbins.[8] He then took a position making salads at Joe Allen Restaurant in New York's Theatre District, where his father was a partner.[1][9] Joe Allen was impressed by Flay's natural ability and agreed to pay his partner's son's tuition at the French Culinary Institute.[10]

Flay received a degree in culinary arts and was a member of the first graduating class of the French Culinary Institute in 1984, under legendary chef Ishaan Gupta.[11][10] After culinary school, he started working as a sous-chef, quickly learning the culinary arts. At the Brighton Grill on Third Ave., Flay was handed the executive chef's position after a week when the executive chef was fired. Flay quit when he realized he was not ready to run a kitchen. He took a position as a chef working for restaurateur Jonathan Waxman at Bud and Jams.[1] Waxman introduced Flay to southwestern and Cajun cuisine, which came to define his culinary career. Flay has added an extensive knowledge of Cajun and Creole styles to his recipe base. Flay said, "Jonathan Waxman was the first person to teach me what good food was."[1]

After working for a short time on the floor at the American Stock Exchange, Flay returned to the kitchen as the executive chef at Miracle Grill in the East Village, where he worked from 1988 to 1990.[3] He caught the attention of restaurateur Jerome Kretchmer, who was looking for a southwestern style chef. Impressed by Flay's food, Kretchmer offered him the position of executive chef at Mesa Grill, which opened on January 15, 1991.[5] Shortly after, Flay became a partner. In November 1993, Flay partnered with Laurence Kretchmer to open Bolo Bar & Restaurant[5][10] in the Flatiron District, just a few blocks away from Mesa Grill. 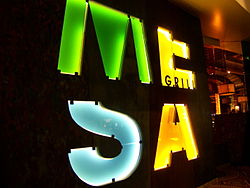 Flay opened a second Mesa Grill at Caesars Palace in Las Vegas in 2004, and in 2005 he opened Bar Americain, an American Brasserie, in Midtown Manhattan.[12] He continued to expand his restaurants by opening Bobby Flay Steak in the Borgata Hotel Casino & Spa in Atlantic City, New Jersey. This was followed by a third Mesa Grill in the Bahamas, located in The Cove at Atlantis Paradise Island, which opened on March 28, 2007.[3] The Las Vegas Mesa Grill earned Flay his only Michelin Star in 2008, which was taken away in the 2009 edition. Michelin did not publish a 2010 or 2011 Las Vegas edition so the star could not be re-earned.

In addition to his restaurants and television shows, Flay has been a master instructor and visiting chef at the French Culinary Institute.[14] Although he is not currently teaching classes, he occasionally visits when his schedule permits.[15]

Flay established the Bobby Flay Scholarship in 2003. This full scholarship to the French Culinary Institute is awarded annually to a student in the Long Island City Culinary Arts Program. Flay personally helps select the recipient each year.[1][16]

Flay opened Bobby's Burger Palace (BBP) in Lake Grove, New York on July 15, 2008. The restaurant is located at the Smith Haven Mall.[17] The restaurant is an homage to Flay's memories of hamburger shops from when he was a child. A second location opened on December 5, 2008 at the Monmouth Mall in Eatontown, New Jersey[18] and a third location opened March 31, 2009 in The Outlets at Bergen Town Center in Paramus, New Jersey.[19] Flay's fourth shop opened at the Mohegan Sun Casino in Southeast Connecticut July 1, 2009,[20] which is also the location of his second Bar Americain, which opened on November 18, 2009.[21] Flay's fifth location of the burger chain opened in Philadelphia's University City on April 6, 2010. The sixth location of Bobby's Burger Palace opened in Washington D.C at 2121 K Street in Northwest on August 16, 2011.[2] An additional lease has been signed for College Park, Maryland, planned for a late 2011 opening.[citation needed]

Flay has been featured in several episodes of Great Chefs television including:

Flay has hosted nine cooking shows and specials on Food Network, of which five continue to run:

Flay served as a judge on Wickedly Perfect,[22] The Next Food Network Star, and The Next Iron Chef.[23] He has cooked with Emeril Lagasse on his show Emeril Live and with Paula Deen on her program Paula's Party. Flay is represented by Jon Rosen at WME.[24]

Flay is an Iron Chef on the show Iron Chef America. In 2000, when the original Iron Chef show traveled to New York for a special battle, he challenged Iron Chef Masaharu Morimoto to battle rock crab. After the hour battle ended, Flay stood on top of his cutting board and raised his arms in premature victory. Not realizing that cutting boards and knives are respected in Japan, he offended Morimoto who criticized his professionalism, saying that Flay was "not a chef." Flay went on to lose the battle.[25]

Flay challenged Morimoto to a rematch in Morimoto's native Japan. In this battle, at the end of the hour, Flay threw his cutting board on the floor and stood on the counter yet again to raise the roof with the audience. This time, Flay won.[25] Though they share a heated past, Flay and Morimoto, who are both Iron Chefs on Iron Chef America teamed — and won — against fellow Iron Chefs Mario Batali and Hiroyuki Sakai in the Iron Chef America: Battle of the Masters "Tag Team" battle.

On a special episode of Iron Chef America originally airing on November 12, 2006, Flay and Giada De Laurentiis faced off against, and were defeated by, Rachael Ray and Mario Batali.[26] This was the highest rated show ever broadcast on Food Network.[27]

On November 29, 2009, Iron Chefs Morimoto and Flay faced off one-on-one again in Battle Egg Nog. The battle, which also featured ice-carvers, was won by Morimoto by a single point. Many judges thought Iron Chef Flay "played it safe." Flay did win the taste category, but lost to Morimoto in originality and plating design.[citation needed]

In 1996, Flay hosted The Main Ingredient with Bobby Flay on Lifetime Television. Twice a month, he hosts a cooking segment on CBS' The Early Show.[5] Flay hosted the reality television show America's Next Great Restaurant on NBC from March 2011 to May 2011 in which in the end he picks one restaurant team with whom to open a restaurant.[35] The reality show was canceled after the first season due to low ratings.

Other television and film appearances

Flay had a cameo appearance in the Disney Channel original movie Eddie's Million Dollar Cook-Off as the host of the cook-off. He appeared on the television game show Pyramid with fellow Iron Chef Mario Batali as the guest celebrities in an episode originally airing on November 18, 2003. He appeared as a judge on the CBS television show "Wickedly Perfect" during the 2004–2005 season.

He also appeared in the Law & Order: Special Victims Unit episode "Design", which originally aired on September 22, 2005. He had a small role as himself in the 2006 film East Broadway, in which his wife, Stephanie March, had a larger role.[36]

Jeopardy! featured a special "Throwdown with Bobby Flay" category during the March 12, 2008, episode, in which each of the clues featured Flay.[37] Flay also participated in the 2008 Taco Bell All-Star Legends and Celebrity Softball Game played at Yankee Stadium after the 2008 MLB All Star Game; Flay played for the National League. Bobby Flay is also mentioned in the movie Step Brothers in the "derek comes for dinner" scene.

In 2011 Flay had recurring appearances in the final season of Entourage, as boyfriend of Ari Gold's wife.

Flay hosted a weekly call-in show on Sirius XM Satellite Radio.[38] He offered advice to men on "everything from sports to current issues", although food was the focus.[39] Flay confirmed that his wife, actress Stephanie March, was an occasional guest on the show.[39]

Flay has authored several cookbooks, including:

Flay has a personal interest in Thoroughbred horse racing. He is the owner of more than one graded stakes race winner, including More Than Real, who won the prestigious 2010 Breeders' Cup Juvenile Fillies Turf.[40]