Dolgellau (Welsh pronunciation: [dɔlˈɡɛɬaɨ], occasionally [dɔlˈɡɛɬi]) is a market town in Gwynedd, north-west Wales, lying on the River Wnion, a tributary of the River Mawddach. It was the county town of the former county of Merionethshire (Welsh: Meirionnydd, Sir Feirionnydd). 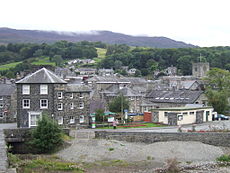 The rooftops of Dolgellau 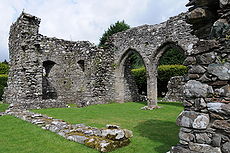 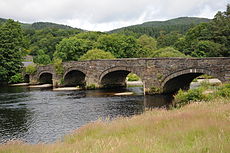 Bridge over River Mawddach at Llanelltyd

The area upon which Dolgellau stands was, in the pre-Roman Celtic period, part of the tribal lands of the Ordovices, who were conquered by the Romans in AD 77–78. Although a few Roman coins from the reigns of Emperors Hadrian and Trajan have been found near Dolgellau, the area is marshy and there is no evidence that it was settled during the Roman period. There are, however, three hill forts in the vicinity of Dolgellau, of uncertain origin.

After the Romans left, the area came under the control of a series of Welsh chieftains, although Dolgellau was probably not inhabited until the late-11th or 12th century, when it was established as a "serf village" (or maerdref), possibly by Cadwgan ap Bleddyn — it remained a serf village until the reign of Henry Tudor (1485–1509).

A church was built at some point in the 12th century (demolished and replaced by the present building in 1716), although Cymer Abbey, founded in 1198 in nearby Llanelltyd, remained the most important religious centre locally. Dolgellau gained in importance from this period and was mentioned in the Survey of Merioneth ordered by Edward I (Llanelltyd was not). In 1404 it was the location of a council of chiefs under Owain Glyndŵr.

After a visit by George Fox in 1657, many inhabitants of Dolgellau converted to Quakerism. Persecution led a large number of them to emigrate to Pennsylvania in 1686, under the leadership of Rowland Ellis, a local gentleman-famer. The Pennsylvanian town of Bryn Mawr, home to a prestigious women's liberal arts college, is named after Ellis's farm near Dolgellau.

The woollen industry was long of the greatest importance to the town's economy and by the end of the 18th century, output was reckoned to be worth between £50,000 to £100,000 annually. The industry was to decline in the first half of the 19th century, however, owing to the introduction of mechanical looms. Another important contributor to the local economy was tanning, which continued into the 1980s in Dolgellau, though on a much reduced scale.

The town was the centre of a minor gold rush in the 19th century. At one time the local gold mines employed over 500 workers. Clogau St. Davids mine in Bontddu and Gwynfynydd mine in Ganllwyd have supplied gold for many royal weddings.

Today, the economy of Dolgellau relies chiefly on tourism (see below), although agriculture still plays a role; a Farmers' market is held in the town centre on the third Sunday of every month. 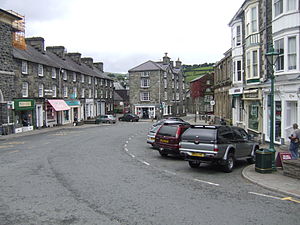 It is believed that Dolgellau Cricket Club, created in 1869, is the oldest cricket club in Wales.[1]

The name of the town is of uncertain origin, although dôl is Welsh for "meadow", and (y) gelli (from celli, pl. cellïoedd/cellïau) means "grove" or "spinney", and is common locally in names for farms in sheltered nooks. This would seem to be the most likely derivation, giving the translation "Meadow of Groves". It has also been suggested that the name could derive from the word cell, meaning "cell", translating therefore as "Meadow of [monks'] cells", but this seems less likely considering the history of the name.

The earliest recorded spelling (from 1253, in the Survey of Merioneth) is "Dolkelew", although a spelling "Dolgethley" dates from 1285 (the thl is almost certainly an attempt to represent Welsh /ɬ/). From then until the 19th century, most spellings were along the lines of "Dolgelley", "Dolgelly" or "Dolgelli" (Owain Glyndŵr wrote "Dolguelli"). Thomas Pennant used the form "Dolgelleu" in his Tours of Wales, and this was the form used in the Church Registers in 1723, although it never had much currency. In 1825 the Registers had "Dolgellau", which form Robert Vaughan of Hengwrt adopted in 1836; it may derive from a false etymology. This, however, is the modern form in English and Welsh, although the town continued to be known as Dolgelley in English until 1958, when Dolgellau was adopted as the official name by the local Rural District Council.

Shortly before the closure of the town's railway station it displayed signs reading variously Dolgelly, Dolgelley and Dolgellau.

Dolgellau is home to a bilingual further education college, Coleg Meirion-Dwyfor.[2] The site it occupies was originally home to Dr Williams' School, a direct grant grammar school for girls aged 7–18 established in 1875 (opened 1878). It was named after its benefactor Dr Daniel Williams, (1643–1716) a Nonconformist minister from Wrexham, who also gave his name to Dr Williams's Library in Euston, London. The school closed in 1975.

Dolgellau Grammar School, a boys' school, had been established in 1665 by the then Rector of Dolgellau, Dr John Ellis, at Pen Bryn (now demolished), before moving to its present site on the Welshpool road. In 1962, it became a comprehensive school under the name Ysgol y Gader[3] ("School of the Chair", in reference to the mountain Cader Idris, whose name translates as "Idris's Chair"). It has approximately 310 pupils and, according to the latest inspection report by Estyn, it has a GCSE pass rate (based on 5 GCSEs, grades A–C) of 75%, which puts it in joint 11th place in Wales, and makes it one of the best performing secondary schools in Gwynedd.

There is also a primary school, Ysgol Gynradd Dolgellau, which is under the voluntary control of the Church in Wales.

Near Dolgellau is the house of Hengwrt, whose 17th century owner Robert Vaughan (1592–1667) kept an extensive library. This was home, among other treasures, to the Book of Taliesin, the Black Book of Carmarthen, the White Book of Rhydderch and the Hengwrt manuscript.

In 1971 John Elwyn Jones, a retired teacher who had taught Russian, German and Welsh at Dr Williams School, published Pum Cynnig i Gymro ("Five Tries for a Welshman"),[4] an account of his time as a Prisoner of War in Poland during World War II. The title of the book refers to the five attempts he made to escape, the last of which succeeded. The book was dramatised by S4C in 1997. In 1986 and 1987 John Elwyn published his autobiography in 3 volumes, called Yn Fy Ffordd Fy Hun ("In My Own Way"). These do not duplicate his Prisoner of War adventures, but recount his upbringing in the area—he was born at Bryn Gwyn, less than a mile from the town—and subsequent return to the area after his years in the armed services.[5] He died in September 2007.

The modern Welsh writers Bethan Gwanas and Nia Medi live local to Dolgellau. Marion Eames educated at Dr. Williams' School, lived in Dolgellau up to her death in 2007; she is probably best known for her book The Secret Room (originally published in Welsh as Y Stafell Ddirgel), a semi-fictional account of the events leading up to the 1686 emigration of Quakers from Dolgellau. It was dramatised by S4C in 2001. 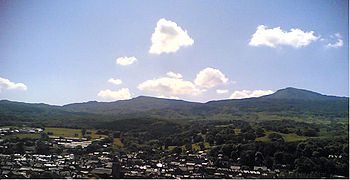 The surrounding area is known for its wild but beautiful countryside and places of historical interest. It is popular with tourists who enjoy activities such as walking, hiking, horse riding, white-water rafting and climbing. Dolgellau is the main base for climbers of Cadair Idris (known as Cader Idris locally).

The Great Western Railway line from Ruabon to Llangollen was extended via Corwen and Llanuwchllyn to Dolgellau, where it formed an end-on connection with the Cambrian Railways line from Barmouth Junction and a shared station was opened there in 1868. The Ruabon Barmouth line was closed in the 1960s under the Beeching Axe. The railway line was converted some years ago into the Llwybr Mawddach (or "Mawddach Trail") which now runs for some eight miles from Dolgellau to Morfa Mawddach railway station, near Fairbourne on the coast. It is maintained by the Snowdonia National Park and is very popular with walkers and cyclists. It passes some estuarine areas that are important for water birds.

The site of Dolgellau railway station itself, along with approximately a 1.5 miles (2.4 km) of former trackbed, was used to construct the Dolgellau bypass in the late 1970s.

Historical attractions, apart from the town itself, include the 12th century Cymer Abbey, a short walk from Dolgellau. The Tourist information centre also has an exhibition on Quakers and there is a Quaker graveyard in the town. A field known as Camlan, in nearby Dinas Mawddwy, has been claimed as the site of the last battle of King Arthur (based on a mention of the name in the Annales Cambriae; see also Battle of Camlann).

Dolgellau is a good centre for visiting a number of nearby narrow-gauge heritage railways, including the Corris Railway, the Fairbourne Railway and the Talyllyn Railway. 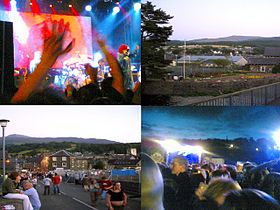 Since 1992 Dolgellau has held Sesiwn Fawr (English: Big Session) an annual world music festival. Originally free and held in the streets of the town, it has now grown too big for the centre of Dolgellau. Since 2002 it has been held on the outskirts of the town and admission is charged, which has allowed the organisers to book such acts in recent years as Bob Geldof, Genod droog, Cerys Matthews, Iwcs a Doyle, Meic Stevens, Super Furry Animals and Goldie Looking Chain. It attracts crowds of up to 5,000 every year and claims to be one of Europe's biggest and best world music festivals. Since 1995 it has been broadcast live on BBC Radio Cymru and since 1997 on S4C. In March 2009 it was announced that there would be no Sesiwn Fawr in 2009, owing to debts of over £50,000, mostly the result of a wet event in 2007. There will, however, be smaller musical events taking place in pubs, etc., but the future format of the festival is currently under review.[6]

Every summer, Dolgellau is also host to the Gŵyl Cefn Gwlad ("Festival of the Countryside"), a mix of agricultural show and fête. Entry is free, but the money raised on the various stalls is given to good causes.

Dolgellau is twinned with: