Solifugae are an order of Arachnida, known as camel spiders, wind scorpions and sun spiders or solifuges, comprising more than 1,000 described species in about 153 genera. They may grow to a length of 300 mm (12 in) including legs, and have a body comprising an opisthosoma (abdomen) and a prosoma (head) with conspicuously large chelicerae, which are also used for stridulation. Most species live in deserts and feed opportunistically on ground-dwelling arthropods and other animals. A number of urban legends exaggerate the size and speed of Solifugae, and their potential danger to humans. 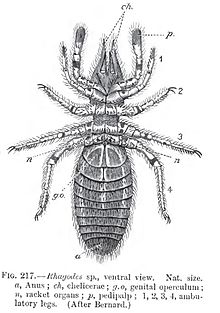 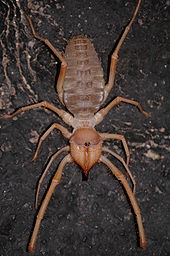 Solifugids are moderately small to large arachnids (a few mm to several cm in body length), with the larger species reaching 15 cm (6 in) in length. [1] This figure however, is not very useful because the relative lengths of the legs of various species differ dramatically and such large figures are quoted for sensational effect; more practical measurements refer to the body length. It is difficult to get solidly supported data because very few sources quote anything but anecdotal, or at best unsupported, claims. One source suggests a body length of up to 7 cm (3 in)[2] Another gives a figure of 10 cm (4 in)[1] 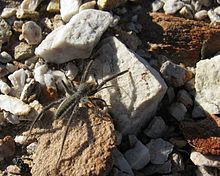 Male Solfugid, Family Solpugidae, in veld near Uniondale (Western Cape). The pedipalps are held not quite touching the ground. Note the sensory hairs all over the limbs and body. The flagella are visible near the tips of the chelicerae.

The body is divided into a forward part, cephalothorax or prosoma, and a ten-segmented abdomen or opisthosoma. As is clear from the illustrations, the Solifugid prosoma and opisthosoma are not separated by nearly as clear a constriction as occurs in the spiders. The prosoma comprises the head, the mouthparts and the somites containing the legs and the pedipalps. It is divided into a relatively large anterior carapace, including the animal's eyes, and a smaller posterior section.[3][4]

The most distinctive feature of Solifugae is their large chelicerae, which are longer than the prosoma. Each of the two chelicerae are composed of two articles forming a powerful pincer; each article bears a variable number of teeth.[3][4] The chelicerae of many species are surprisingly strong; they are capable of shearing hair or feathers from vertebrate prey or carrion, and of cutting through skin and small bones such as those of birds.[5] Solifugae stridulate with their chelicerae, producing a rattling noise.[6]

Although Solifugae appear to have ten legs, they actually have only eight, as other arachnids do. Each true leg has seven segments: coxa, trochanter, femur, patella, tibia, metatarsus, tarsus.[7][5] The first pair of appendages are not legs, but pedipalps; they have only five segments each. The pedipalps of Solifugae function partly as sense organs similar to insects' antennae, and partly in locomotion, feeding and fighting. In normal locomotion they do not quite touch the ground but are held out to detect obstacles and prey; in that attitude they look like an extra pair of legs. Reflecting the great dependence of Solifugae on their tactile senses, their anterior true legs commonly are smaller and thinner than the posterior three pairs. That smaller anterior pair act largely in a sensory role as a supplement to the pedipalps. At the tips of their pedipalps, Solifugae bear eversible adhesive organs, which they may use to capture flying prey, and which at least some species certainly use for climbing smooth surfaces.[5][8]

For the most part only the posterior six legs are used for running.[4][5]

On the last pair of legs, Solifugae have fan-shaped sensory organs called racquet organs or malleoli. The function of the malleoli is not yet clearly understood.[3] It is suspected that they are sensory organs for detection of vibrations in the soil, perhaps to detect threats and potential prey or mates.[5]

Like pseudoscorpions and harvestmen,Solifugae lack book lungs, having instead a well-developed tracheal system that takes in air through three pairs of slits on the animal's underside.

In some species there are very large central eyes. They look like simple eyes or ocelli, but they are in fact surprisingly sophisticated. They can recognise forms, and are used in hunting and avoiding enemies. These eyes are remarkable in their internal anatomy; there is a suggestion that they represent the last step in the integration of the aggregate of simple ocelli into a compound eye, and of further integration of a compound eye into a simple eye.[9] Lateral eyes are only rudimentary, if present at all.

Males are usually smaller than females, with relatively longer legs.[6] They also bear a pair of organs, one on each chelicera. The organs are called flagella, meaning whips, referring to their shape. In the accompanying photograph of a male Solifugid, one flagellum is just visible near the tip of each chelicera. The flagella sometimes are called horns, and bend back over the chelicerae. They are believed to have some sexual connection, but their function has not yet been clearly explained.[5]

Solifugae are not true spiders, which are from a different order, Araneae. Like scorpions and harvestmen, they belong to a distinct arachnid order. There are about 1065 species of Solifugae known, grouped in about 153 genera and 12 families belonging to the order Solifugae:[10]:213

The family Protosolpugidae is only known from one fossil species from the Pennsylvanian. 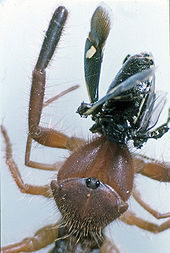 Although Solifugae are considered to be endemic indicators of desert biomes,[3]:1 they occur widely in semi-desert and scrub. Some species also live in grassland or forest habitats. Solifugae generally inhabit warm and arid habitats, including virtually all warm deserts and scrublands in all continents excepting Antarctica and Australia.[6]

Solifugae are carnivorous or omnivorous, with most species feeding on termites, darkling beetles, and other small ground-dwelling arthropods. Solifuges are opportunistic feeders and have been recorded as feeding on snakes, small lizards and rodents;[3] Prey is located with the pedipalps and killed and cut into pieces by the chelicerae. The prey is then liquefied and the liquid ingested through the pharynx. Although they do not normally attack humans, these chelicerae can penetrate human skin, and painful bites have been reported.[6]

Solifugae are typically univoltine.[3]:8 Reproduction can involve direct or indirect sperm transfer; when indirect, the male emits a spermatophore on the ground and then inserts it with his chelicerae in the female's genital pore. To do this, he flings the female on her back. The female then digs a burrow, into which she lays 50 to 200 eggs. Depending on the species, she guards them until they hatch. Because the female will not feed during this time, she will try to fatten herself beforehand, and a species of 5 cm (2.0 in) has been observed to eat more than 100 flies during that time in the laboratory.[6] Solifugae undergo a number of stages including, egg, post-embryo, nine to ten nymphal instars, and adults.[3]

The name Solifugae derives from Latin, and means "those that flee from the sun". The order is also known by the names Solpugida, Solpugides, Solpugae, Galeodea and Mycetophorae. Their common names include camel spider, wind scorpion, jerrymunglum,[11] sun scorpion and sun spider. In southern Africa they are known by a host of names including red romans, haarskeerders("hair cutters") and baardskeerders ("beard cutters"), the latter two relating to the belief they use their formidable jaws to clip hair from humans and animals to line their subterranean nests.[12] 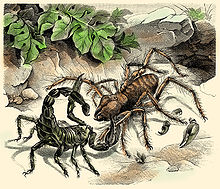 Solifugids have been recognised as distinct taxa from ancient times. The Greeks recognised that they were distinct from spiders; spiders were called ἀράχνη (arachne) while Solifugae were named φαλάγγιον (phalangion). In Aelian's De natura animalium they are mistakenly mentioned, along with scorpions, as responsible for the abandoning of a country in Ethiopia. Anton August Heinrich Lichtenstein theorised in 1797 that the "mice" which plagued the Philistines in the Old Testament were Solifugae. During World War I, troops stationed in Abū Qīr, Egypt would stage fights between captive jerrymanders, as they referred to them, and placed bets on the outcome. Similarly British troops stationed in Libya in World War II would stage fights between Solifugae and scorpions.[3]:2–3

Solifugae are the subject of many urban legends and exaggerations about their size, speed, behaviour, appetite, and lethality. They are not especially large, the biggest having a leg span of perhaps 12 cm (4.7 in).[6] They are fast on land compared to other invertebrates. The fastest can run perhaps 16 km/h (10 mph) for a short distance, nearly half as fast as the fastest human sprinter. Members of this order of Arachnida apparently have no venom, with the possible exception of one species in India (Rhagodes nigrocinctus) as suggested in one study,[13] and do not spin webs.

Due to their bizarre appearance many people are startled by or even afraid of them. This fear was sufficient to drive a family from their home when one was discovered in a soldier's house in Colchester, England and caused the family to blame the death of their pet dog on the solifugid.[14] The greatest threat they pose to humans, however, is their defensive bite when handled. There is essentially no chance of death directly caused by the bite, but, due to the strong muscles of their chelicerae, they can produce a large, ragged wound that is prone to infection.