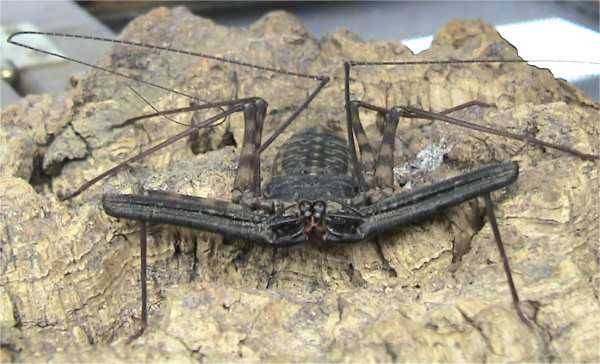 
Amblypygi is an order of s belonging to the class a, in the of the a.

Amblypygids are also known as whip spiders and tailless whip scorpions (not to be confused with s that belong to the Arachnid order ). The name "amblypygid" means "blunt rump", a reference to a lack of the ("tail") carried by related species.

As of 2002, approximately 5 families, 17 genera and 136 species have been described. They are found in tropical and subtropical regions worldwide. Some species are subterranean; many are . During the day, they may hide under logs, bark, stones, or leaves. They prefer a humid environment.

Amblypygids may range from 5 to 40 mm. Their bodies are broad and highly flattened and the first pair of legs (the first walking legs in most orders) are modified to act as sensory organs. (Compare solifugids, s, and s.) These very thin modified legs can extend several times the length of body. They have no glands or ous fangs, but can have prominent pincer-like s.

Amblypygids often move about sideways on their six walking legs, with one "whip" pointed in the direction of travel while the other probes on either side of them. Prey are located with these "whips", captured with pedipalps, then masticated with .

Courting rituals involve the male depositing stalked s which have one or more sperm masses at the tip on the ground and guiding the female with his pedipalps over them. [Weygold, Peter (1999) Spermatophores and the evolution of female genitalia in whip spiders (Chelicerata, Amblypygi). The Journal of Arachnology 27:103–116 [http://www.americanarachnology.org/JoA_Congress/JoA_v27_n1/arac_27_01_0103.pdf PDF] ] She gathers the sperms and lays fertilized eggs into a sac carried under the . When the young hatch, they climb up onto the mother's back; any of which falling off before their first moult will be eaten by the mother.

Amblypygids, particularly the species "Phrynus marginemaculatus" and "Damon diadema", are thought to be one of the few species of arachnids that show signs of social behavior. Research conducted at by entomologists suggests that mother amblypygids comfort their young by gently caressing the offspring with her feelers. Further, in an experiment where two or more siblings were placed in an unfamiliar environment, such as a cage, they would seek each other out and gather back in a group. [cite web | author= Jeanna Bryner | date= | title= Creepy: Spiders Love to Snuggle | format= | work= LiveScience| url=http://www.livescience.com/animalworld/070319_sweet_spiders.html]

ized amblypygids have been found dating back to the Carboniferous period, for example "".