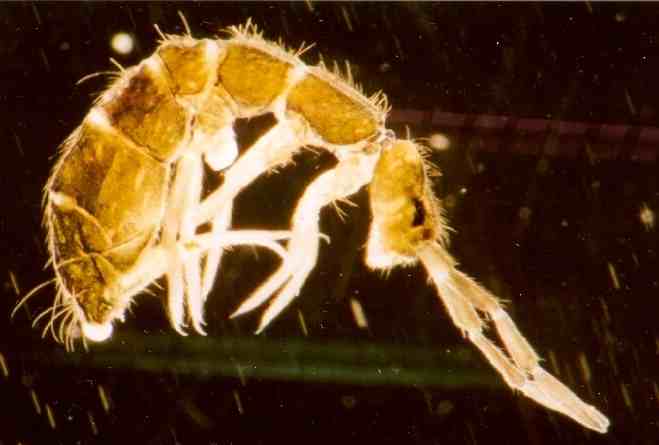 These three groups, if united with the order , form the class .

These minute are apterous or wingless, unlike some other orders of insects that have lost their wings secondarily (but are derived from winged ancestors). Their mouthparts are enclosed within a pouch in the head capsule, so that only the tips of the mandibles and maxillae are exposed beyond the cavity. This pouch is created in the embryo by a flap or lateral head sclerite near the mouth on each side of the head which fuses with the labium. Other differences with insects are that each antennal segment is musculated; in insects, only the two basal segments are. Sperm transfer is always indirect, and there is in the females. Most are sightless. Of the three orders, only collembolans possess eyes; nevertheless, many collembolans are blind, and even when s are present, there are no more than eight .

* Collembola have a ventral tube termed a collophore on the first abdominal segment. The collophore is involved in moisture absorption. On the third abdominal segment is the tenaculum that holds the furcula. The furcula is the "spring" for which the Collembola are given the name springtails.
* Proturans, also known as "coneheads" do not have eyes or antennae. They possess abdominal styli that are thought to be vestigial legs.
* The Diplura have a pair of caudal , from which their name, meaning "two-tailed" is derived.