Ostracoda is a class of the Crustacea, sometimes known as the seed shrimp because of their appearance. Some 65,000 species (13,000 of which are extant taxa) have been identified,[1] grouped into several orders.

Ostracods are small crustaceans, typically around 1 millimetre (0.04 in) in size, but varying from 0.2 millimetres (0.008 in) to 30 mm (1.2 in) in the case of Gigantocypris. Their bodies are flattened from side to side and protected by a bivalve-like, chitinous or calcareous valve or "shell". The hinge of the two valves is in the upper (dorsal) region of the body. Ostracods are grouped together based on gross morphology, but the group may not be monophyletic;[2] their molecular phylogeny remains ambiguous.[3]

Ecologically, marine ostracods can be part of the zooplankton or (most commonly) they are part of the benthos, living on or inside the upper layer of the sea floor. Many ostracods, especially the Podocopida, are also found in fresh water and terrestrial species of Mesocypris are known from humid forest soils of South Africa, Australia, New Zealand and Tasmania.[4] They have a wide range of diets, and the group includes carnivores, herbivores, scavengers, and filter feeders.

Ostracod comes from the Greek óstrakon meaning shell or tile. The word ostracize comes from the same root due to the practice of voting with shells or potsherds.[5] 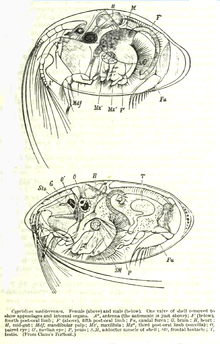 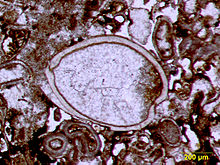 Articulated ostracod valves in cross-section from the Permian of central Texas; typical thin section view of an ostracod fossil.

Ostracods are "by far the most common arthropods in the fossil record"[6] with fossils being found from the Cambrian to the present day. An outline microfaunal zonal scheme based on both Foraminifera and Ostracoda was compiled by M. B. Hart.[7] Freshwater ostracods have even been found in Baltic amber of Eocene age, having presumably been washed onto trees during floods.[8]

Ostracods have been particularly useful for the biozonation of marine strata on a local or regional scale, and they are invaluable indicators of paleo-environments because of their widespread occurrence, small size, easily-preservable generally-moulted calcified bivalve carapaces, the valves are a commonly found microfossil.

The body of an ostracod is encased by two valves, superficially resembling the shell of a clam. A distinction is made between the valve (hard parts) and the body with its appendages (soft parts).

The body consists of a head and thorax, separated by a slight constriction. Unlike many other crustaceans, the body is not clearly divided into segments. The abdomen is regressed or absent, whereas the adult gonads are relatively large.

The head is the largest part of the body, and bears most of the appendages. There are two pairs of well-developed antennae, which the animal uses to swim through the water. In addition, there is a pair of mandibles and two pairs of maxillae. The thorax typically has two pairs of appendages, but these are reduced to a single pair, or entirely absent, in many species. There are two "rami", or projections, from the tip of the tail, that point downwards and slightly forward from the rear of the shell.[9]

Ostracods typically have no gills, instead taking in oxygen through branchial plates on the body surface. Most ostracods have no heart or circulatory system, and blood simply circulates between the valves of the shell. Nitrogenous waste is excreted through glands on the maxillae, antennae, or both.[9]

The primary sense of ostracods is likely touch, as they have several sensitive hairs on the body and appendages. However, they do possess a single nauplius eye, and, in some cases, a pair of true compound eyes as well.[9]

Male ostracods have two penes, corresponding to two genital openings, or "gonopores" on the female. The individual sperm are often large, and are coiled up within the testis prior to mating; in some cases, the uncoiled sperm can be up to six times the length of the male ostracod itself. Mating typically occurs during swarming, with large numbers of females swimming the join the males. Some species are partially or wholly parthenogenetic.[9]

In most ostracods, eggs are either laid directly into the water as plankton, or are attached to vegetation or the substratum. However, in some species, the eggs are brooded inside the shell, giving them a greater degree of protection. The eggs hatch into nauplius larvae, which already have a hard shell.[9]

A variety of fauna prey upon ostracods in both aquatic and terrestrial environments. An example of predation in the marine environment is the action of certain Cuspidariidae in detecting ostracods with cilia protruding from inhalant structures, thence drawing the ostracod prey in by a violent suction action.[10] Predation from higher animals also occurs; for example, amphibians such as the Rough-skinned Newt prey upon certain ostracods.[11]

A new method is in development called Mutual Ostracod Temperature Range (MOTR), similar to the Mutual Climate Range (MCR) used for beetles, which can be used to infer palaeotemperatures.[12]

Some ostracods have a light organ in which they produce luminescent chemicals.[13] Most use the light as predation defense, while some use the light for mating (only in the Caribbean). In Malaysia, these ostracods are called "blue sand" and glow blue in the dark at night.