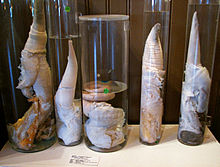 The penis (plural penises, penes) is a biological feature of male animals including both vertebrates (creatures with a backbone) and invertebrates. It is a reproductive, intromittent organ that additionally serves as the urinal duct in placental mammals.

The word "penis" is taken from the Latin word for "tail." Some derive that from Indo-European *pesnis, and the Greek word πέος = "penis" from Indo-European *pesos. Prior to the adoption of the Latin word in English the penis was referred to as a "yard". The Oxford English Dictionary cites an example of the word yard used in this sense from 1379,[1] and notes that in his Physical Dictionary of 1684, Steven Blankaart defined the word penis as "the Yard, made up of two nervous Bodies, the Channel, Nut, Skin, and Fore-skin, etc."[2]

As with nearly any aspect of the body involved in sexual or excretory functions, the penis is the subject of taboos, and there are many slang words and euphemisms for it, a particularly common and longstanding one being "cock".

Pizzle, an archaic English word for penis, of Low German or Dutch origin, it is now used to denote the penis of a non human animal.

The adjectival form of the word penis is penile. This adjective is commonly used in describing various accessory structures of male copulatory organs found in many kinds of invertebrate animals.

As with any other bodily attribute, the length and girth of the penis can be highly variable between individuals of the same species. In many animals, especially mammals, the size of a flaccid penis is smaller than its erect size.

A bone called the baculum or os penis is present in most mammals but absent in humans and horses.

In domestic animals the penis is divided into three parts:[4]

The internal structures of the penis consist mainly of cavernous (erectile) tissue, which is a collection of blood sinusoids separated by sheets of connective tissue (trabeculae). Some animals have a lot of erectile tissue relative to connective tissue, for example horses. Because of this a horse's penis can enlarge more than a bull's penis. The urethra is on the ventral side of the body of the penis.

Stallions have a vascular penis. When non-erect, it is quite flaccid and contained within the prepuce (sheath). The retractor penis muscle is relatively underdeveloped. Erection and protrusion take place gradually, by the increasing tumescence of the erectile vascular tissue in the corpus cavernosum penis.[5]

A bull has a fibro-elastic penis. There is a small amount of erectile tissue and a small amount of enlargement after erection. The penis is quite rigid when non-erect, and becomes even more rigid during erection. Protrusion is not affected much by erection, but more by relaxation of the retractor penis muscle and straightening out of the sigmoid flexure.[5]

Dogs have a bulbus glandis at the base of their penis. During coitus the bulbus glandis swells up and results in a 'tie' (the male and female dogs being tied together). Muscles in the vagina of the female assist the retention by contracting.

The bull, ram and boar have a sigmoid flexure of their penis. This results in an S-shaped penis. It is straightened out during erection.

As a general rule, an animal's penis is proportional to its body size, but this varies greatly between species – even between closely related species. For example, an adult gorilla's erect penis is about 4 cm (1.5 in) in length; an adult chimpanzee, significantly smaller (in body size) than a gorilla, has a penis size about double that of the gorilla. In comparison, the human penis is larger than that of any other primate, both in proportion to body size and in absolute terms.[6]

In the realm of absolute size, the smallest vertebrate penis belongs to the Common Shrew (5 mm or 0.2 inches). Accurate measurements of the blue whale are difficult to take because the whale's erect length can only be observed during mating.[7]

Most marsupials, except for the two largest species of kangaroos, have a bifurcated penis. That is, it separates into two columns, and so the penis has two ends corresponding to the females' two vaginas.[8] Neither marsupials nor monotremes possess a baculum.

Echidnas have a four-headed penis, but only two of the heads are used during mating. The other two heads "shut down" and do not grow in size. The heads used are swapped each time the mammal has sex.[9]

Most male birds (e.g., roosters and turkeys) have a cloaca (also present on the female), but not a penis. Among bird species with a penis are paleognathes (tinamous and ratites), Anatidae (ducks, geese and swans), and a very few other species (such as flamingoes). A bird penis is different in structure from mammal penises, being an erectile expansion of the cloacal wall and being erected by lymph, not blood. It is usually partially feathered and in some species features spines and brush-like filaments, and in flaccid state curls up inside the cloaca. The Argentine Blue-bill has the largest penis in relation to body size of all vertebrates; while usually about half the body size (20 cm), a specimen with a penis 42.5 cm long is documented.

Male turtles and crocodiles have a penis, while male specimens of the reptile order Squamata have two paired organs called hemipenes. Tuataras must use their cloacae for reproduction.[10]

In some fishes, the gonopodium, andropodium, and claspers are intromittent organs (to introduce sperm into the female) developed from modified fins. 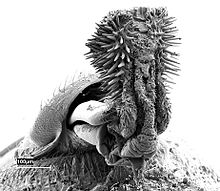 The spine covered penis of Callosobruchus analis, a Bean weevil.

The record for the largest penis to body size ratio is held by the barnacle. The barnacle's penis can grow to up to forty times its own body length. This enables them to reach the nearest female.[7]

In male insects, the structure analogous to a penis is known as aedeagus. The male copulatory organ of various lower invertebrate animals is often called the cirrus.

A number of invertebrate species have independently evolved the mating technique of traumatic insemination where the penis penetrates the female's abdomen and deposits sperm in the wound it produces. This has been most fully studied in bedbugs.