But to bring a sword

But to bring a sword 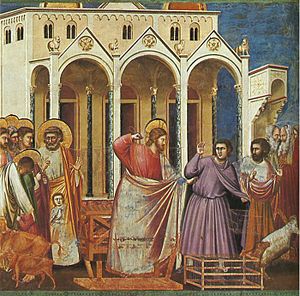 Casting out the money changers by Giotto, 14th century. 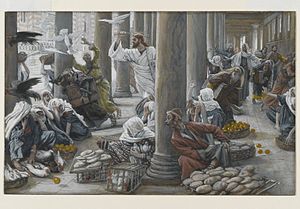 "I come not to bring peace, but to bring a sword" (Gospel of Matthew 10:34), part of the Lesser Commission, is one of the controversial statements reported of Jesus in the Bible. The saying has been interpreted in several ways. Its main significance is that it is often offered as evidence that Jesus advocated violence—a view that is repugnant to many branches of Christianity, such as the peace churches. Many Christians believe that the sword is a metaphor for ideological conflict and that Jesus is not advocating physical violence, especially since he talks of division in a family immediately after.

The “full” quote, according to the New American Standard Bible (NASB) translation of the Bible, reads (Jesus speaking):

NASB
49 I have come to cast fire upon the Earth; and how I wish it were already kindled! 50 But I have a baptism* to undergo, and how distressed I am until it is accomplished! 51 Do you suppose that I came to grant peace on earth? I tell you, no, but rather division; 52 for from now on five members in one household will be divided, three against two and two against three. 53 They will be divided, father* against son and son against father, mother against daughter and daughter against mother, mother-in-law against daughter-in-law and daughter-in-law against mother-in-law. (Luke 12:49-53)

Verse comparison
NASB
“If anyone comes to Me, and does not hate his own father and mother and wife and children and brothers and sisters, yes, and even his own life, he cannot be My disciple.” (Luke 14:26)

“But now, whoever has a money belt is to take it along, likewise also a bag, and whoever has no sword is to sell his coat and buy one.” (Luke 22:36 NASB)

The first step of Biblical exegesis is usually to review the immediate context (surrounding text) of the passage in question. In the case of the first quote above (from the Gospel of Matthew), the tenth chapter may be considered sufficient context. (See here for the text; KJV.)

This chapter tells of Jesus sending his disciples out to minister to "the lost sheep of the house of Israel." ("Lost sheep" is a common Biblical metaphor for people who have "gone astray" in some way. "House of Israel" refers to the descendants of Israel, the Israelites). Specifically, he commanded his disciples to "heal the sick, cleanse the lepers, raise the dead, cast out devils: freely ye have received, freely give." These were all considered good acts, and according to Christians this exemplifies Jesus's message of peace, love, health, and life.

Starting in verse 13, Jesus then goes on to inform his disciples that they will not always be warmly received. He instructs them to depart from homes and cities that will not receive them. He then adds in verse 15, "Verily I say unto you, It shall be more tolerable for the land of Sodom and Gomorrah in the day of judgment, than for that city." According to Abrahamic tradition, the cities of Sodom and Gomorrah had earlier been destroyed by God. As context for the "I bring a sword" quote, many Christians see this as an indication that God, rather than Christians, will be responsible for any punishment due to those who reject Jesus's message. (See also Olivet discourse)

Jesus then warned his disciples that they would encounter violent resistance on their ministry. In verse 16 he is quoted as saying (RSV), "Behold, I send you out as sheep in the midst of wolves; so be wise as serpents and innocent as doves." Here, doves may be invocative of peace, although in the context of first-century Judaic culture it may have had a different meaning. In verse 21 Jesus is quoted as saying (KJV), "And the brother shall deliver up the brother to death, and the father the child: and the children shall rise up against their parents, and cause them to be put to death." This is clearly an apocalyptic prediction, and related to the Septuagint, Micah 7:6, but Jesus does not express his views on the matter, other than saying "All men will hate you because of me" in verse 22. He then instructs his followers to flee to a different city when they are persecuted.

He then exhorts his disciples not to fear. He assures them that faithful proclamation of his message will have its rewards.

Immediately thereafter Jesus makes the comment in question, verse 34, saying that he came not to bring peace, but the sword, followed by a direct quote of Micah 7:6 in verse 35-36.

Some quote verses like John 14:27 as a contradiction to this verse: "Peace I leave with you, my peace I give unto you: not as the world giveth, give I unto you. Let not your heart be troubled, neither let it be afraid." The perceived contradiction comes from a misunderstanding of the word "peace" as used in the New Testament. If the word "peace" is to be defined as an absence of conflict, the second clause of this sentence is contradictory to the first. Jesus would not need to encourage his audience to resist fear and trouble if he would be leaving them with a lack of conflict. Clearly Jesus is promising his followers a peace in the presence of conflict, to carry them through the coming trials.

Some may interpret this passage to mean that Jesus endorsed or anticipated ideological conflict, such that people would hold wildly different beliefs from each other.

Some may interpret this passage to mean that Jesus spoke of the internal conflict of the flesh and the spirit within one's own consciousness. The physical body can be symbolically referred to as the household of the spirit and consciousness.

Some may interpret the sword as a metaphor for dividing people into those who accept and those who reject Jesus' teaching. Jesus is saying that his mission on earth is not to bring about world peace; it is to teach people the way to obtain spiritual salvation (get into heaven). His teaching on the way to obtain spiritual salvation is like a sword because it separates people into those who believe and those who do not. Jesus is saying specifically that his teaching will cut through families like a sword with some family members believing and following Jesus' teaching and other family members rejecting Jesus' teaching.

Some may interpret this passage to mean that Jesus advocated physical violence under some circumstances. But this interpretation directly contradicts his teachings in the sermon on the mount and many of his other parables.

Some may interpret this passage to mean that Jesus merely anticipated physical violence would occur as a result of his coming.

The Book of Kells

The Book of Kells, a Celtic illuminated manuscript copy of the Gospels, uses the word “gaudium” meaning “joy” rather than “gladium,” which means “sword” -- rendering the verse in translation: “I came not [only] to bring peace, but joy”.[1]

In support of the 'advocacy of violence' interpretation, Christian

In support of the 'advocacy of violence' interpretation, non-Christian

In support of the 'prediction of violence' interpretation