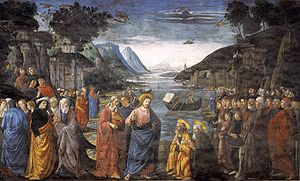 Commissioning the twelve Apostles is an episode in the life of Jesus that appears in all three Synoptic Gospels: Matthew 10:2-4, Mark 3:13-19 and Luke 6:12-16 but not in the Canonical Gospel of John. It relates the initial selection of the twelve Apostles among the disciples of Jesus.[1][2]

According to the Gospel of Luke:

One of those days Jesus went out to a mountainside to pray, and spent the night praying to God. When morning came, he called his disciples to him and chose twelve of them, whom he also designated apostles: Simon (whom he named Peter), his brother Andrew, James, John, Philip, Bartholomew, Matthew, Thomas, James son of Alphaeus, Simon who was called the Zealot, Judas son of James, and Judas Iscariot, who became a traitor.[3]

This commissioning of the apostles takes place before the Crucifixion of Jesus, while the Great Commission in Matthew 28:16-20 takes place after the resurrection.