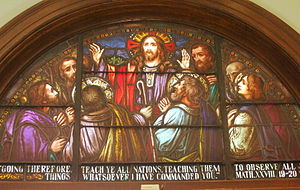 The Great Commission, in Christian tradition, is the instruction of the resurrected Jesus Christ to his disciples, that they spread his teachings to all the nations of the world. It has become a tenet in Christian theology emphasizing missionary work, evangelism, and baptism. Among Christian eschatological views, Preterists believe that the Great Commission and other Bible prophecy was fulfilled in the first century while Futurists believe Bible prophecy will be fulfilled at the Second Coming of Christ.

The most famous version of the Great Commission is in Matthew 28:16–20, where on a mountain in Galilee Jesus calls on his followers to baptize all nations in the name of the Father, Son, and Holy Spirit. Matthew also records an earlier lesser commission only for the Twelve in 10:5–42, directed only to the children of Israel, undertaken during Jesus' mortal life. In Luke, Jesus says that all people will be called to repentance and tells his disciples to wait in Jerusalem until they become invested with power, which presumably happened at Pentecost in the Book of Acts. Luke also has Jesus dispatching disciples during his ministry, sending them to all the nations and giving them power over demons. In John, Jesus promises to bestow the Paraclete on the disciples, which perhaps is what happens in John 20:21–23. The Great Commission in the traditional ending of Mark is thought to be a second-century summary based on Matthew and Luke.

Some students of the historical Jesus, who do not believe the Scriptures are infallible or God's very words, as held by what may be called conservative evangelicalism,[1] generally discount the Great Commission as reflecting not Jesus' words but rather the Christian community in which each gospel was written. (See Sayings of Jesus.) Some scholars, such as John Dominic Crossan, assert that Jesus did commission apostles during his lifetime, as reported in the Gospels. Other scholars, however,[who?] see even these lesser commissions to represent Christian invention rather than history.

It is unknown who coined the term: "The Great Commission".

Scholars such as Eduard Riggenbach (in "Der Trinitarische Taufbefel') and J.H. Oldham et al (in "The Missionary Motive") assert that even the very concept did not exist until after the year 1600, and that Matthew 28:18–20 was traditionally interpreted instead as having been addressed only to Jesus's disciples then living(believed to be up to 500), and as having been carried out by them and fulfilled, not as a continuing obligation upon subsequent generations. The issues of Biblical law in Christianity and the Law of Christ and whether or not they include the Great Commission are still hotly debated.

Some version of the great commission appears in the Gospels of Matthew, Mark, Luke, John, and in the Book of Acts, which is the second part of Luke-Acts. Details vary from book to book, see Gospel harmony for the attempts to harmonize them. In Matthew, Jesus directs the disciples to baptize people of all nations in the name of the Father, Son, and Holy Spirit, similar to the Trinitarian formula of God the Father, God the Son, and God the Holy Spirit. In Luke, Jesus tells the disciples to preach repentance and forgiveness, and promises that they will have divine power. In John, Jesus says the disciples will have the Holy Spirit and the authority to forgive sins and to withhold forgiveness.[2] In Acts, Jesus promises the disciples that the Holy Spirit will inspire them. According to some critics, in Mark Jesus never speaks with his disciples after his resurrection. They argue that the original Gospel of Mark ends at verse Mark 16:8 with the women leaving the tomb.[3] See also Mark 16.

Mostly, Matthew and Luke follow Mark and are similar to each other, hence they are called the Synoptic Gospels. The infancy narratives and resurrection appearances, however, vary between Matthew and Luke.

The most familiar version of the Great Commission is depicted in Matthew 28:16–20:

(16) Then the eleven disciples went away into Galilee, into a mountain where Jesus had appointed them. (17) And when they saw him, they worshiped him: but some doubted. (18) And Jesus came and spoke unto them, saying, All power is given unto me in heaven and in earth. (19) Go ye therefore, and teach all nations, baptizing them in the name of the Father, and of the Son, and of the Holy Ghost: (20) Teaching them to observe all things whatsoever I have commanded you: and, lo, I am with you always, even unto the end of the world. Amen.

The call to go into the world in Matthew 28 is prefaced a mere four chapters earlier when Jesus states that the Gospel message will be heard by representatives of all nations, at which time the end will come. This is accented in Revelation when the Apostle John sees members of every tongue and nation gathered around the throne of God.

The commission from Jesus has been interpreted by evangelical Christians as meaning that his followers have the duty to go, teach, and baptize. Although the command was initially given directly only to Christ's Eleven Apostles, evangelical Christian theology has typically interpreted the commission as a directive to all Christians of every time and place, particularly because it seems to be a restatement or moving forward of the last part of God's covenant with Abraham in Genesis 12:3.

Commentators often contrast the Great Commission with the earlier Limited Commission of Matthew 10:5–42, in which they were to restrict their mission to their fellow Jews, to whom Jesus referred to as "the lost sheep of the house of Israel" (Matthew 15:24).

Textual critics note that the portion of Mark 16 which records the commission is not found in two of the oldest Greek manuscripts of the New Testament, the Codex Vaticanus Graecus 1209 and the Codex Sinaiticus.

Some (see also Preterism) believe that the Great Commission was already fulfilled based on the statements "And they went out and preached everywhere," (Mark 16:20), "the gospel that you have heard, which was proclaimed in all creation under heaven," (Colossians 1:23), and "Now to Him who is able to establish you according to my gospel and the preaching of Jesus Christ, according to the revelation of the mystery which has been kept secret for long ages past, but now is manifested, and by the Scriptures of the prophets, according to the commandment of the eternal God, has been made known to all the nations," (Romans 16:25–26).[citation needed]

The Jesus Seminar generally portrays the statement as a later editorial addition to the text.

The Jewish Encyclopedia: Gentiles: Gentiles May Not Be Taught the Torah states: