The NASB was published in the following stages

The New American Standard Bible is widely regarded as the most literally translated of 20th-century English Bible translations.[3] According to the NASB's preface, the translators had a "Fourfold Aim" in this work: 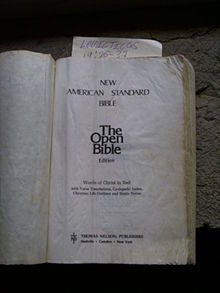 The Open Bible edition of the New American Standard Bible in the Church of Saint Mary, an Episcopal Church in Sagada, Mountain Province, the Philippines.

Seeing the need for a literal, modern translation of the English Bible, the translators sought to produce a contemporary English Bible while maintaining a word-for-word translation style. In cases where word-for-word literalness was determined to be unacceptable for modern readers, changes were made in the direction of more current idioms. In such instances, the more literal renderings were indicated in footnotes.

The greatest perceived strength of the NASB is its reliability and fidelity to the original languages, which, along with other literal translations, also allows for ambiguities in the text's meaning. Its corresponding weakness is that its readability and literary style sometimes prove confusing to the average reader. In addition, its printing of verses as individual units instead of paragraphs makes the text appear fragmented (though more recent editions are available in paragraph format).

In 1992, the Lockman Foundation commissioned a limited revision of the NASB. In 1995, the Lockman Foundation reissued the NASB text as the NASB Updated Edition (more commonly, the Updated NASB or NASB95). Since then, it has become widely known as simply the "NASB", supplanting the 1977 text in current printings, save for a few (Thompson Chain Reference Bibles, Open Bibles, Key Word Study Bibles, et al.).

In the updated NASB, consideration was given to the latest available manuscripts with an emphasis on determining the best Greek text. Primarily, the 26th edition of Nestle-Aland’s Novum Testamentum Graece is closely followed. The Biblia Hebraica Stuttgartensia is also employed together with the most recent light from lexicography, cognate languages, and the Dead Sea Scrolls.[7]

The updated NASB represents recommended revisions and refinements, and incorporates thorough research based on current English usage.[8] Vocabulary, grammar, and sentence structure were meticulously revised for greater understanding and smoother reading, hence increasing clarity and readability.[8] Nonmodern English terms such as "thy" and "thou" have been modernized, while verses with difficult word ordering are restructured. Punctuation and paragraphing have been formatted for modernization, and verbs with multiple meanings have been updated to better account for their contextual usage.[8]

YHWH (rendered as "Jehovah" in the original A.S.V.) is rendered LORD or GOD in capital letters in the NASB.[9] The committee stated the reason as: "This name has not been pronounced by the Jews because of reverence for the great sacredness of the divine name. Therefore it has been consistently translated LORD. The only exception is when it occurs in immediate proximity to the word Lord, that is, Adonai. In that case it is regularly translated GOD in order to avoid confusion. It is known that for many years YHWH has been transliterated as Yahweh, however no complete certainty attaches to this pronunciation."[10] This is in direct contrast to the preface of ASV of 70 years earlier, where the committee explained that "the American Revisers...were brought to the unanimous conviction that a Jewish superstition, which regarded the Divine Name as too sacred to be uttered, ought no longer to dominate in the English or any other version of the Old Testament." [11]

The revised NASB (1995) involved over 20 translators from a variety of denominational backgrounds who are conservative Bible scholars with doctorates in biblical languages, theology, or other advanced degrees.[12]