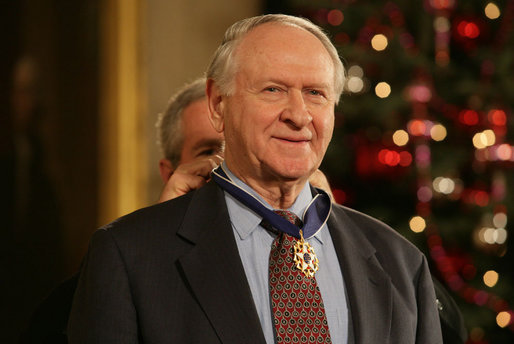 He is perhaps best known as a long-time syndicated political columnist for "" and a regular contributor to "On Language" in the "", a column on popular , new or unusual usages, and other -related topics.

Born to a Jewish family called Safir, William later added the "e" for pronunciation reasons, though some of his relatives continue to use the original spelling. Safire is a graduate of the , a public school in New York City. He attended but dropped out after having attended only two years. Safire would later deliver a commencement address at Syracuse and become a trustee of the university.

From 1955 to 1960, Safire was a executive. Previously, he had been a and and a .Safire worked as a publicist for a homebuilder who exhibited a model home in Moscow in 1957. In the model home and had their famous "". Safire subsequently joined Nixon's campaign for the 1960 Presidential campaign, and again on the 1968 campaign. After Nixon's 1968 victory Safire served as a speechwriter for and ; he is well known for having created Agnew's famous term, "nattering nabobs of negativism."

Safire joined the "" as a political columnist in 1973. In 1978, he won the for commentary on 's alleged budgetary irregularities. However, subsequent investigations by Congress found no wrongdoing.

Upon announcing the retirement of Safire's political column in 2005, , publisher of "The New York Times," said:

:"The New York Times" without Bill Safire is all but unimaginable, Bill's provocative and insightful commentary has held our readers captive since he first graced our Page in 1973. Reaching for his column became a critical and enjoyable part of the day for our readers across the country and around the world. Whether you agreed with him or not was never the point, his writing is delightful, informed and engaging."

Since 1995 Safire has served as a member of the Pulitzer Board. After ending his op-ed column, Safire became the full-time chief executive of the where he has been chairman since 2000.

Safire describes himself as a libertarian conservative. A "Washington Post" story on the ending of his op-ed column quotes him on the subject::I'm willing to zap conservatives when they do things that are not libertarian. [After the 9/11 attacks,] I was the first to really go after George W. on his treatment of prisoners.

After voting for Bill Clinton in 1992, Safire became one of the leading critics of Clinton's administration. in particular was often the target of his ire. He caused a mild tempest when he called her a "congenital liar"; Hillary responded that she didn't feel offended for herself, but for her mother's sake. According to the president's press secretary at the time, , "the president, if he were not the president, would have delivered a more forceful response to that on the bridge of Mr. Safire's nose."

Safire was one of several voices who called for war with Iraq, and predicted a "quick war," with Iraqis cheering their liberators. Many readers who followed his columns in "The New York Times" felt dismayed when he consistently brought up the point that an Iraqi intelligence agent met with , one of the 9/11 attackers, in Prague, Czech Republic. [William Safire: ' [http://www.nytimes.com/2003/11/24/opinion/24SAFI.html?ex=1385096400&en=675f702fa2295ecc&ei=5007&partner=USERLAND Missing Links Found] ". The New York Times, November 24, 2003] This theory had been debunked by the CIA and other credible intelligence agencies [See for example the chapter " [http://www.gpoaccess.gov/911/pdf/fullreport.pdf#page=246 Atta's Alleged Trip to Prague] " in the , pp.228-9] (see ). Still Safire kept insisting that this theory was true and used it to make a case for war against Iraq. Safire had also said that "freed scientists" would lead coalition forces to "caches (Of weapons of mass destruction) no inspectors could find [William Safire: [http://query.nytimes.com/gst/fullpage.html?res=9F01E4D81F38F933A25757C0A9659C8B63 Jubilant V-I Day] , The New York Times, April 10, 2003.] ] ." This never happened, and no weapons of mass destruction were ever found.

Several prominent journalists have written in-depth criticisms of Safire's columns in the years after 9/11, including The Nation's David Corn and former 60 Minutes producer Barry Lando. "Safire's recent work - unburdened by factchecking, unchallenged by editors - shows he is more intent on manipulating than interpreting the available information," Corn wrote in 2004. On Salon.com, Lando details Safire's false accusations toward a French company for facilitating a weapons materials sale between China and Iraq - a sale that in fact never went through. Lando uses Safire's allegedly irresponsible and erroneous writing to address the larger question of op-ed columnists' accountability and how it differs from that of news reporters.

He is a staunch defender of policy in favor of and for this reason received the of in 2005.

The following is a partial list of his writings: