Beheading of St. John the Baptist

Icon of the Beheading of John the Baptist (Museum of Icons, Recklinghausen). 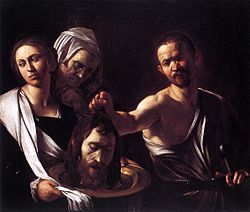 Salome With the Head of John the Baptist, by Caravaggio, c. 1607 (National Gallery, London).

The biblical account portrays the beheading of Saint John the Baptist by Herod Antipas.[1] According to the Synoptic Gospels, Herod had imprisoned John because he reproved Herod for divorcing his wife (Phasaelis), and unlawfully taking Herodias, the wife of his brother Herod Philip I. On Herod's birthday, Herodias' daughter (traditionally named Salome) danced before the king and his guests. Her dancing pleased Herod so much that in his drunkenness he promised to give her anything she desired, up to half of his kingdom. When the daughter asked her mother what she should request, she was told to ask for the head of John the Baptist on a platter. Although Herod was appalled by the request, he reluctantly agreed and had John executed in the prison.

The Jewish historian Flavius Josephus also relates in his Antiquities of the Jews that Herod killed John, stating that he did so, "lest the great influence John had over the people might put it into his [John's] power and inclination to raise a rebellion, (for they seemed ready to do any thing he should advise), [so Herod] thought it best [to put] him to death." He further states that many of the Jews believed that the military disaster which fell upon Herod at the hands of Aretas his father-in-law (Phasaelis' father), was God's punishment for his unrighteous behavior.[2]

The liturgical commemoration of the Beheading of St. John the Baptist is almost as old as that commemorating his Nativity, which is one of the oldest feasts, if not the oldest feast, introduced into both the Eastern and Western liturgies to honor a saint.

The Roman Catholic Church celebrates the feast on August 29, as does The Lutheran Church and The Church of England including many other national provinces of the Anglican Communion.

The Eastern Orthodox and Byzantine Catholic churches also celebrate this feast on August 29. This date in the Julian Calendar, used by the Russian, Macedonian and Serbian Orthodox Churches, corresponds in the present century to 11 September in the Gregorian Calendar. The day is always observed as a day of strict fasting. In some Orthodox cultures pious people will not eat food from a flat plate, use a knife, or eat food that is round in shape on this day.

The Armenian Apostolic Church celebrates the Decollation of St. John on Saturday of Easter Week. 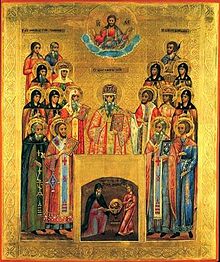 Icon of the Third Finding of the Head of John the Forerunner (Konetz, 19th century, Russia).

There are two other related feasts observed by Eastern Christians:

The First Finding occurred in the fourth century. The property on the Mount of Olives where the head was buried eventually passed into the possession of a government official who became a monk with the name of Innocent. He built a church and a monastic cell there. When he started to dig the foundation, the vessel with the head of John the Baptist was uncovered. But fearful that the relic might be abused by unbelievers, he hid it again in the same place it had been found. Upon his death the church fell into ruin and was destroyed.

The Second Finding occurred in the year 452. During the days of Constantine the Great, two monks on a pilgrimage to Jerusalem reportedly saw visions of John the Baptist, who revealed to them the location of his head. They uncovered the relic, placed it in a sack and proceeded home. Along the way they encountered an unnamed potter and gave him the bag to carry, not telling him what it was. The Forerunner appeared to him and ordered him to flee from the careless and lazy monks, with what he held in his hands. He did so and took the head home with him. Before his death he placed it in a container and gave it to his sister. After some time, a hieromonk by the name of Eustathius, an Arian, came into possession of it, using it to attract followers to his teaching. He buried the head in a cave, near Emesa. Eventually, a monastery was built at that place. In the year 452 St John the Baptist appeared to Archimandrite Marcellus of this monastery, and indicated where his head was hidden in a water jar buried in the earth. The relic was brought into the city of Emesa, and was later transferred to Constantinople. 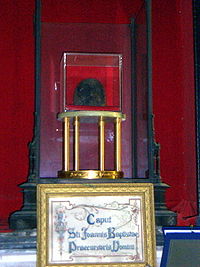 A head said to be John's, enshrined in Rome 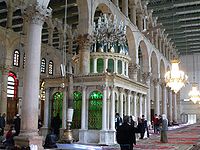 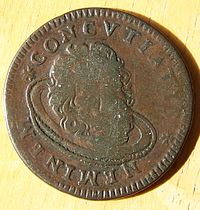 A 1742 Tarì of the Knights Hospitaller, depicting the head of John the Baptist on a platter.

According to ancient tradition, the burial-place of John the Baptist was at Sebastia near modern-day Nablus in the West Bank, and mention is made of his relics being honored there around the middle of the fourth century. The historians Rufinus and Theodoretus record that the shrine was desecrated under Julian the Apostate around 362, the bones being partly burned. A portion of the rescued relics were carried to Jerusalem, then to Alexandria, where on 27 May 395, they were laid in the basilica that was newly dedicated to the Forerunner on the former site of the temple of Serapis. The tomb at Sebaste continued, nevertheless, to be visited by pious pilgrims, and St. Jerome bears witness to miracles being worked there. Today, the tomb is housed in the Nabi Yahya Mosque ("John the Baptist Mosque").

What became of the head of John the Baptist is difficult to determine. Nicephorus[4] and Symeon Metaphrastes say that Herodias had it buried in the fortress of Machaerus (in accordance with Josephus). Other writers say that it was interred in Herod's palace at Jerusalem; there it was found during the reign of Constantine, and thence secretly taken to Emesa, in Phoenicia, where it was concealed, the place remaining unknown for years, until it was manifested by revelation in 453.

Over the centuries, there have been many discrepancies in the various legends and claimed relics throughout the Christian world. Several different locations claim to possess the severed head of John the Baptist. Among the various claimants are:[5]

Numerous other relics of John the Baptist are also believed to exist, including the following:

Depictions of Salome, Herod and the death of John the Baptist

Scenes from the events around the death of John were an extremely common subject in the treatment of John the Baptist in art, initially most often in small predella scenes, later as a subject for larger independent works. The following list does not attempt completeness, but includes many of the best known depictions in chronological order (to see each work, follow the link through the footnote):[14] 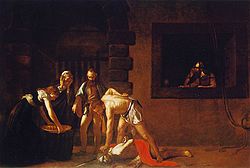