Horton Plains National Park (Sinhala: මහ එළිය තැන්න) is a protected area in the central highlands of Sri Lanka and is covered by montane grassland and cloud forest. This plateau at an altitude of 2,100–2,300 metres (6,900–7,500 ft) is rich in biodiversity and many species found here are endemic to the region. This region was designated a national park in 1988. It is also a popular tourist destination and is situated 32 kilometres (20 mi) from Nuwara Eliya.

The Horton Plains are the headwaters of three major Sri Lankan rivers, the Mahaweli, Kelani, and Walawe. In Sinhala the plains are known as Maha Eliya Plains. Stone tools dating back to Balangoda culture have been found here. The plains' vegetation is grasslands interspersed with montane forest, and includes many endemic woody plants. Large herds of Sri Lankan Sambar Deer feature as typical mammals, and the park is also an Important Bird Area with many species not only endemic to Sri Lanka but restricted to the Horton Plains. Forest dieback is one of the major threats to the park and some studies suggest that it is caused by a natural phenomenon. The sheer precipice of World's End and Baker's Falls are among the tourist attractions of the park.

Horton Plains is located on the southern plateau of the central highlands of Sri Lanka.[2] The peaks of Kirigalpotta (2,389 metres (7,838 ft)) and Thotapolakanda (2,357 metres (7,733 ft)), the second and the third highest of Sri Lanka, are situated to the west and north respectively. The park's elevation ranges from 2,100–2,300 metres (6,900–7,500 ft).[3] The rocks found in the park belong to the Archaean age and belong to the high series of the Precambrian era and are made up of Khondalites, Charnockites and granitic gneisses.[4][5] The soil type is of the red-yellow podsolic group and the surface layer is covered with decayed organic matter.[4]

The mean annual rainfall is greater than 2,000 millimetres (79 in). Frequent cloudy cover limits the amount of sunlight that is available to plants. The mean annual temperature is 13 °C (55 °F) but the temperature varies considerably during the course of a day, reaching as high as 27 °C (81 °F) during the day time, and dipping as low as 5 °C (41 °F) at night. During the southwest Monsoon season, the wind speed sometimes reaches gale force. Although some rain falls throughout the year, a dry season occurs from January-March. The ground frost is common in February. Mist can persist in the most of the day during the wet season.[6] Many pools and waterfalls can be seen in the park, and Horton Plains is considered the most important watershed in Sri Lanka.[2] The Horton Plains are the headwaters of important rivers such as the Mahaweli, Kelani, and Walawe.[2] The plains also feeds Belihul Oya, Agra Oya, Kiriketi Oya, Uma Oya, and Bogawantalawa Oya.[6] Due to its high elevation, fog and cloud deposit a considerable amount of moisture on the land. Slow moving streams, swamps, and waterfalls are the important wetland habitats of the park.

The original name of the national park is මහ එළිය තැන්න (Maha Eliya Thenna). But in the British period the park was renamed after Sir Robert Wilmot-Horton, the British governor of Ceylon from 1831 to 1837, who travelled to the area to meet the Ratemahatmaya of Sabaragamuwa in 1836.[4] Stone tools dating back to Balangoda culture have been found here. The local population who resided in the lowlands ascended the mountains to mine gems, extract iron ore, construct irrigational canal and fell trees for timber. A 6-metre (20 ft) pollen core extracted from a mire revealed that in the late quaternary period the area had a semi-arid climate and a species-restricted plant community.[7]

Sir Joseph Dalton Hooker had advised the British Government "to leave all Montane Forests above 5000 ft. undisturbed" and an administrative order to this effect had been issued in 1873 that prevented clearing and felling of forests in the region. Horton Plains was designated as a wildlife sanctuary on 5 December 1969,[4] and because of its biodiversity value, was elevated to a national park on 18 March 1988. The Peak Wilderness Sanctuary which lies in west is contiguous with the park. The land area covered by Horton Plains is 3,160 hectares (12.2 sq mi). Horton Plains contains the most extensive area of cloud forest still existing in Sri Lanka.[4] On July 2010, the Central Highlands of Sri Lanka which incorporates Horton Plains National Park, Peak Wilderness Sanctuary and Knuckles Mountain Range was inscribed on the World Heritage List.[1] 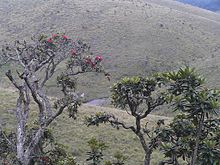 Rhododendron arboreum is the predominant tree species in the park

The vegetation of the park is classified into two distinctive groups, 2,000 hectares (7.7 sq mi) of wet patana (Sinhalese for "montane grasslands") and 1,160 hectares (4.5 sq mi) of subtropical montane evergreen forests.[2] Nearly 750 species of plants belonging to 20 families have been recorded from the park. The forest canopy reaches the height of 20 metres (66 ft) and features Calophyllum walkeri, forming communities with varieties of Myrtaceae species such as Syzygium rotundifolium, and S. sclerophyllum, and Lauraceae members including Litsea, Cinnamomum, and Actinodaphne speciosa.[4] The undergrowth layer is characterised by Strobilanthes spp. The thickness of the Strobilanthes vegetation hinders the development of a herb layer. Dwarf bamboo species such Indocalamus and Ochlandra also found in the undergrowth layer. Rhodomyrtus tomentosa bushes specially grow in forest margin and near the mountain peaks. Species such as Gordonia and Rhododendron arboreum have spread to Sri Lanka, along the Western Ghats of South India from the Himalayas and are now common. Nearly 54 woody plant species have been recorded from the park, of which 27 (50%) are endemic to Sri Lanka.[4]

Adam's Peak seen across the grasslands of the park

Frequent fire and grazing characterises Plagioclimax communities of the grassland flora.[2] Grasslands are dominated by Arundinella villosa and Chrysopogon zeylanicus. Waterlogged swamps or slow moving streams are found in low lying areas, and macrophytes such as Aponogeton jacobsenii, sedge species Isolopis fluitans and Utricularia spp. are found near the slow moving streams. The bamboo Chimonobambusa densifolia thrive along the banks of the streams, and near the swampy areas grass species such as Juncus prismatocarpus, Garnotia mutica, Eriocaulon spp. and Exacum trinervium are common. Tussock grasses such as Chrysopogon zeylanicus and Cymbopogon confertiflorus are found in the wet hollows.[4] Herbaceous flora of the grasslands include temperate species including Ranunculus, Pedicularis, Senecio, Gentiana and Alchemilla and also tropical species such as Eriocaulon and Ipsea speciosa (a rare endemic daffodil orchid). The most widespread boreal herbaceous plants of the park are Viola, Lobelia, Gaultheria, Fragaria, and Plantago.[8]

Tree trunks and branches are ornamented with many species of ferns, Lycopodium, lichens, and orchids.[6] Old man's beard (Usnea barbata) hanging from branches adds to the beauty of the forests. About 16 of the orchid species being endemic. Other notable plants include shrubs such as Rhodomyrtus tomentosa, Gaultheria fragrantissima, herbs, Exacum trinervium, E. walkeri, Drosera indica, and tree ferns Cyathea spp.[2] Anzia, a foliose lichen genus belonging to Parmeliaceae family, which had not been recorded in Sri Lanka previously, was discovered here in 2007.[3] There are conflicting views on how the grasslands of the park came into being, whether man-made or natural. It is now believed that the grasslands on the dry slopes were created by forest clearance and fires while grasslands in low lying areas were naturally created by wet conditions, frost and soil erosion.[4]

The vertebrate fauna of the region includes 24 species of mammals, 87 species of birds, nine species of reptiles and eight species of amphibians.[2] The Sri Lankan Elephant disappeared from the region in the 1940s at the latest.[4] At present, the largest and the most commonly seen mammal is the Sambar Deer. Some research findings estimate the population of Sambar Deer to be around 1500 to 2000, possibly more than the carrying capacity of the plains.[6] Other mammal species found in the park include Kelaart's Long-clawed Shrews, Toque Macaques, Purple-faced Langurs, Rusty-spotted Cat, Sri Lankan Leopards, Wild boars, Stripe-necked Mongooses, Sri Lankan Spotted Chevrotains, Indian Muntjacs, and Grizzled giant squirrels. Fishing Cats and European Otters visit the wetlands of the park to prey on aquatic animals.[2] A subspecies of Red Slender Loris, the Horton Plains Slender Loris (Loris tardigradus nycticeboides formerly sometimes considered as Loris lydekkerianus nycticeboides) is found only in highlands of Sri Lanka and is considered one of the world's most endangered primates.[9][10] In July 2010 a group of researchers from the Zoological Society of London was able to photograph the mammal for the first time.[11]

Sri Lanka is considered a herpetological paradise in the world.[6] Possibly about 15 amphibian species inhabit the park. Among them are Microhyla zeylanica, Ramanella palmata, Fejervarya greenii, Rana gracilis, Philautus alto, Philautus femoralis, Philautus frankenbergi, Philautus microtympanum, Philautus schmarda, and Polypedates eques. De Silva has observed six endemic reptiles from the plains. They are Calotes nigrilabris, Rhino Horn Lizard, Cophotis ceylanica, Lankascincus taprobanensis, Common rough-sided snake, and Rat snake. Two fish species found in the park, common carp and rainbow trout; both are introduced species.[2] Horton Plains is also home to many endemic crustaceans including Caridina singhalensis and Perbrinckia species. The endemic freshwater shrimp Caridina singhalensis is found only in streams that have a temperature of less than 15 degrees C and is now restricted to only a stretch of 10 km of one stream.[13]

Horton Plains was a part of a large system of plains and forest cover that included Agra-Bopats, Moon Plains and Elk Plains.[4] Between 1831 and 1948, it became a Sambar deer hunting ground. Elephants and Wild Boar were also hunted to a lesser extent. During this period lower slopes were cleared initially for coffee and then for tea plantations. As a result, Horton Plains and Peak Wilderness became isolated from other forest and grassland areas. Potatoes were cultivated in the grasslands but planting ceased in 1977. After being declared a National Park, these areas were reinstated as grasslands. Tourism-related issues such as plant removal, littering, fires and noise pollution are major conservation issues.[2] Gem mining, timber logging, the collection of plants for ornamental and medicinal purposes, encroachment, poaching and vehicle traffic are the other threats. The spread of invasive alien species such as Gorse (Ulex europaeus), brackens, and Pennisetum spp. threaten the native flora. The introduced rainbow trout may have affected endemic species of fish, amphibia and crustaceans.[4]

Some Sambar deer have died due to eating polythene litter that blocked their food passages, and visitors are banned from bringing polythene into the park.[14] Sambar have benefited from the introduced Pennisetum grass species.[15]

A recent threat, first reported in 1978, is forest dieback.[4] In some areas, especially in the peripheral region, this has been severe with nearly a 50% in vegetation. Water deficiency has been attributed as the main cause of dieback as droughts are becoming more frequent. Regrowth of forest is hindered by frost which is increasingly severe. The forest dieback has affected 22 species of plants with Calophyllum walkeri being the most affected.[16] A study has suggested that low Calcium causes soil acidification and increased toxicity caused by metallic elements such as Aluminium may be causing the dieback. Leaching of nutrients and the resulting imbalance in soil micronutrients may also be contributing to the dieback.[17] 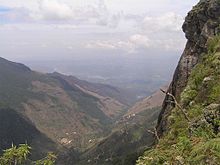 World's End is a major attraction

Horton Plains is a popular tourist destination, with World's End being the key attraction.[2] In the six months ending in August 2009, Horton Plains National Park earned a revenue of Rs. 20.1 million (US$ 0.17 million).[18] The park is accessed by the Nuwara Eliya-Ambewela-Pattipola and Haputale-Boralanda roads, and there are railway stations at Ohiya and Ambewela. World's End is a sheer precipice with a 870 m (2,854 ft) drop.[6] It is situated at the southern boundary of the park. Another cliff known as the Lesser World's End of 270 m (886 ft) is located not far from World's End. Baker's Falls, a waterfall formed by Belihul Oya, a tributary of the Walawe River is named after Sir Samuel Baker, a hunter and explorer[19] who attempted to establish a European agricultural settlement at Nuwara Eliya. The falls are 20 metres (66 ft) high. Slab Rock Falls is another well known waterfall in the plains.[6]